WASHINGTON — Former Vice President Joseph R. Biden Jr., addressing a nation on edge, challenged white Americans on Friday to fully confront the enduring inequities faced by black Americans because, he said, “the pain is too intense for one community to bear alone.”

In his first formal remarks since a white Minneapolis police officer was recorded kneeling on the neck of a black man who later died, Mr. Biden spoke in stark terms about the everyday indignities African-Americans still suffer, from the threat of police violence to the cloud of suspicion that follows them from coffee shops to public parks.

“This is the norm black people in this country deal with,” he said in a brief speech from his Wilmington, Del., home. “They don’t have to imagine it.”

His impassioned plea stood in contrast to President Trump, who just minutes after Mr. Biden spoke appeared at the White House but declined to address the country’s boiling racial tensions — after stoking them with an inflammatory tweet in the morning suggesting that unruly protesters might be shot. Mr. Trump did address the death of the man, George Floyd, at a round table later Friday, calling it a terrible event that should “never happen.”

What was just as revealing about Mr. Biden’s address Friday, and his underlying political wager, is what he did not say.

He made no attempt to soothe the fears of those white Americans who, while sympathetic to the plight of people of color, are just as uneasy about the kind of disturbances that left parts of Minneapolis in flames Thursday night.

Over nearly a half-century in politics Mr. Biden, the presumptive Democratic presidential nominee, has carefully balanced appeals for racial justice with tough-on-crime rhetoric. On Friday, however, he offered no equivocation and did not warn against violence, except to implicitly chide Mr. Trump for his warning that looters could be shot. The burden of responsibility, Mr. Biden suggested, was not on the shoulders of those protesting in the streets of American cities.

“With our complacency, our silence, we are complicit in perpetuating these cycles of violence,” he said, warning that “if we simply allow this wound to scab over once more without treating the underlying injury, we’ll never truly heal.”

Mixing a prepared speech with off-the-cuff comments, Mr. Biden did not stretch for rhetorical greatness. Perhaps befitting the setting, his basement, he was more intimate than lofty.

But his spare words amounted to a bet that other white Americans now share the equally concise sentiment he expressed earlier Friday on Twitter: “Enough.”

He is wagering that the necessity for on-the-other-hand politics, the sort he and his party have long practiced to appeal to the center, has been obviated by a pandemic that is disproportionately sickening and killing people of color; by the now-common stories of people like Christian Cooper, a black man threatened by a white woman while birding in Central Park; and by the names of the deceased Mr. Biden read off at the start of his speech, whose true fate is known only because of cellphone cameras that do not lie.

“I think the reaction of a lot of white people is now just, ‘Damn man, this is bad,’” James Carville, the Democratic strategist, said, referring to shifting sensibilities about the treatment of minorities. “The technology has just brought this home to people, that this is really what is happening.”

The forcefulness of Mr. Biden’s remarks was a pleasant surprise to some black Democrats, who have witnessed him commit a string of gaffes related to race, and were skeptical that a 77-year-old white man could channel African-American anguish.

“Joe Biden went there,” said Bakari Sellers, a Democratic activist who has written about growing up black in the rural South. “Even Barack Obama hedged on issues of race and was not always clear in his language. But to be completely fair, I’m not sure Barack Obama could have given that speech.”

But Mr. Biden has not always made that easy, and Ms. Moseley Braun said his campaign must do more to communicate with voters on this subject, especially after Mr. Biden’s remark last week suggesting that African-Americans torn between himself and Mr. Trump “ain’t black.” The immediate backlash prompted him to apologize hours later.

“The campaign needs to step up their game and connect more,” she said. “I think I fielded 30 phone calls since his foot got in his mouth.”

Mr. Biden may eventually feel compelled to denounce the rioting that began Thursday in a number of cities, particularly if the violence escalates or if police officers are killed in the line of duty, as some were in the summer of 2016.

Few Democrats have found success when they let Republicans seize the mantle of law and order.

“Most Americans are fair-minded people who want justice to be done in situations where wrong has occurred,” the Republican pollster Whit Ayres said. “But they also believe that you shouldn’t go out destroying innocent people’s property and threatening people’s lives as a means of doing so.”

For the moment, just as he did in his comeback primary victory, Mr. Biden is greatly benefiting from his opposition.

Shortly after the former vice president spoke, Mr. Trump seemed poised to wield the full stagecraft of the presidency as he strode into the Rose Garden to address reporters. But instead of speaking about Mr. Floyd, calling for law and order or some combination of both, the president stood before a group of his advisers, all white men, and sought to turn the country’s attention to China. 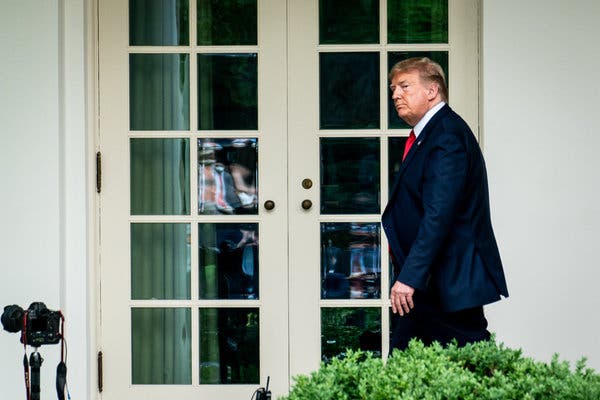 President Trump did not address George Floyd’s death during remarks in the Rose Garden on Friday.Credit…Erin Schaff/The New York Times

Mr. Trump said nothing about the events of this week in Minneapolis, ignored shouted questions as he walked back in the White House and later struggled to justify calling the violent protesters “thugs” and warning that “when the looting starts, the shooting starts.”

If those sentiments, expressed in a pair of after-midnight tweets, were vintage Trump, Mr. Biden’s speech mixed his familiar patter with some unexpected touches.

He opened his hastily arranged address by noting that he had spoken with the Floyd family, the sort of consoler-in-chief outreach he has become known for after his own life of loss, and concluded with another note of reassurance to the family along with a final challenge to white America.

Mr. Biden also evoked past leaders, some explicitly, like the Rev. Dr. Martin Luther King Jr., and others less directly.

Citing the country’s founding promise, he echoed John F. Kennedy’s declaration that equality is “as old as the scriptures and is as clear as the American Constitution.”

By reciting the names of the black victims and repeating what has become a watchword of the racial justice movement, “I can’t breathe,” Mr. Biden also summoned Lyndon B. Johnson, who borrowed the lyrics of the civil rights protest song to vow “we shall overcome.”

Mr. Biden’s advisers recognize that their candidate’s greatest strength is his ability to empathize with people in pain — but finding ways to display that skill while campaigning from home has presented a steep challenge.

This week, however, a campaign that has struggled with caution and indecision in the past moved aggressively to highlight stark contrasts with Mr. Trump on matters of leadership and character.

Mr. Biden made his first public appearance in around two months on Monday, when he ventured out to pay his respects to the war dead on Memorial Day. Mr. Trump, too, saluted members of the military — but he also mocked Mr. Biden for wearing a mask, and on Tuesday he pushed an unfounded allegation of murder against a television host.

On the day that the American death toll from the coronavirus reached 100,000 lives, Mr. Biden delivered by video a somber Oval Office-style address to “my fellow Americans,” citing his own experiences with personal loss to promise that healing would come.

And on Friday morning, while parts of Minneapolis were still smoldering, Mr. Biden announced he would speak on the pain Mr. Floyd’s death had caused.

“The very soul of America is at stake,” Mr. Biden said, infusing the slogan he began his campaign with just over a year ago with fresh urgency. “We must commit as a nation to pursue justice with every ounce of our being.”