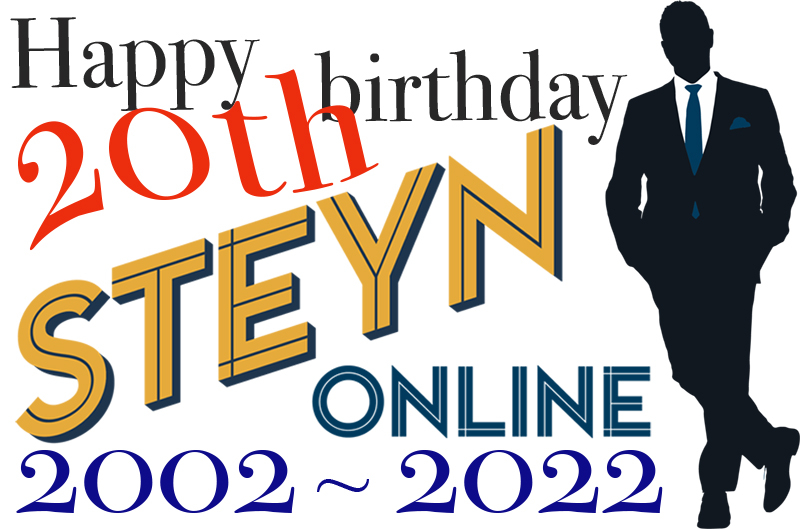 SteynOnline is celebrating its twentieth birthday this month, and we’re marking the occasion by getting back in the cruise biz. No tests, no vax passports, that’s all yours to choose or not; but just a week of fun on the high seas with Bo Snerdley, Michele Bachmann, Tal Bachman, and other Steyn favorites. More information here.

We’re also celebrating by strolling back through the last two decades of the SteynOnline archives (for earlier entries, see below). In the summer months, Tales for Our Time likes to luxuriate in lighter fare than our usual serializations, and for 2020 I decided to offer my own contemporary inversion of Anthony Hope’s classic The Prisoner of Zenda. The thought arose, in that first year of Covid, that life in Eastern European capitals looked far more normal than in the west. And so a summer entertainment was born: a sequel to The Prisoner of Zenda set in England in the day after tomorrow – and not just a sequel, but an about-face. I think most listeners are familiar with the basic conceit of the original: an English gentleman visiting Ruritania is called upon to stand-in for his lookalike, the King, at his coronation. In this instance, a Ruritanian from the House of Elphberg is called upon to return the favor and stand in for an Englishman in London. As with Hope’s tale, it is a story of honor and duty in a very foreign land.

I was delighted by the reaction of Steyn Clubbers to this audio entertainment. Nancy Hawkes wrote from Virginia:

I am a first quarter founding member of the MSC and I don’t comment often, but I couldn’t keep silent about this tale. Where to begin? I save Tales for Our Time for road trips so I can listen for long stretches. The Prisoner of Windsor was amazing. I just finished it tonight. I don’t know which I liked better – the rollicking, funny, sad, sobering story, or the comical, serious, heart-warming, heart-rending reading of it.

There were parts that had me crying with laughter (Rudy at the gay pride parade – good thing I wasn’t going 70+mph at that point!) and tearing up with sadness over the loss of love of country (Rudy trying to instill some backbone in the king). Mark, thank you for this. If only the wider world could hear/read it and understand…

Thank you, Nancy. No sooner had the audio book wrapped up than we had many queries about whether I would be committing it to hard covers. Well, yes, I will. I don’t account it a work of genius, but the “Doctor Davos” character medicating (and over-medicating) national leaders seems to be pretty prescient about where our world is headed.

So, as a bonus for Club members on this twentieth birthday, here’s a preview of the print version’s opening. Simply click here and log-in.

And, if you want to know what happens next, see here.

On this twentieth anniversary of SteynOnline, I’m very touched both by those of you who’ve been checking in here daily for two decades and by those who’ve stumbled upon us more recently – and I hope to see at least a few of you on the 2023 Mark Steyn Cruise. For more information on the Steyn Club, see here – and don’t forget our limited-time Gift Membership.

~We had a very busy weekend at SteynOnline, starting with our Clubland Q&A guest-hosted by our Senior Executive Deputy-Assistant-Under-Vice-President of Canadian Affairs, Andrew Lawton. On Saturday The Hundred Years Ago Show covered rare events – the opening of Tutankhamun’s tomb, an imperial wedding, a triple prime-ministerial execution – and business as usual, with racist Democrats and reach-across-the-aisle Republicans. Our weekly movie date found Rick McGinnis gigging at the flicks, and Steyn’s Song of the Week was a karaoke klassic. We also aired another entry to Mark’s anthology of video poetry – this time in celebration of SteynOnline’s twentieth birthday. And our marquee presentation was also part of our twentieth-anniversary observances, with a stroll through the archives to a free-speech forum from the inaugural Mark Steyn Cruise and some thoughts on the Deep State’s subversion of the Trump presidency.

If you were too busy this weekend enjoying a manual recount in Maricopa, we hope you’ll want to check out one or three of the foregoing as a new week begins.

~Our Sunday Poem and The Hundred Years Ago Show are special productions for The Mark Steyn Club, now in our sixth year. Membership in the Steyn Club comes with some unique benefits, including:

~Our nightly audio adventure Tales for Our Time;
~Exclusive Steyn Store member pricing on over 40 books, mugs, T-shirts, and other products;
~The opportunity to engage in live Clubland Q&A sessions with Mark, such as this Friday’s;
~Transcript and audio versions of The Mark Steyn Show and other video content;
~Mark’s ongoing series of video poetry and other weekend specials;
~Advance booking for his live appearances around the world, including the annual Mark Steyn Cruise;
~Customized email alerts for new content in your areas of interest;
~and the chance to support our print, audio and video ventures as they wing their way around the planet.

We will see you on the telly for the next Steyn Show – and then back here for your comments.