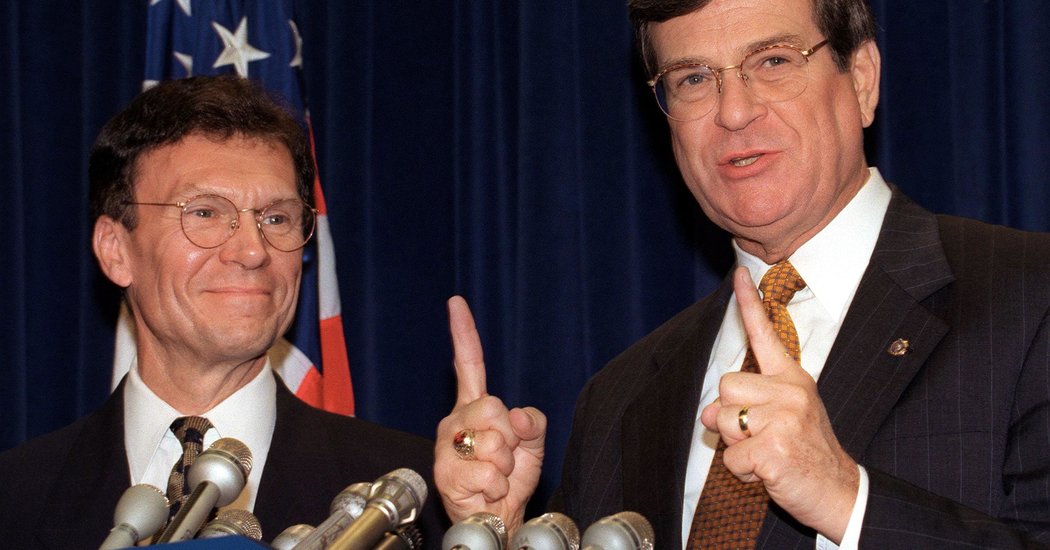 WASHINGTON — The senator was livid. The president of his own party had gotten himself in so much trouble that he was now facing impeachment. And so when the phone rang one night after dinner and the senator picked up to find the White House on the line, he cursed the commander in chief.

The senator’s wife was aghast. “That’s the president!” she whispered in horror.

That was 21 years ago. The president was Bill Clinton, and the senator was Patrick J. Leahy of Vermont, who like other Democrats was furious at the position the leader of his party had put them in. Within a few months, Mr. Clinton would become the defendant in the first Senate impeachment trial in more than 130 years and Mr. Leahy one of the quasi-jurors charged with deciding whether he should be removed from office.

That trial on allegations of perjury and obstruction of justice stemming from a sexual harassment lawsuit has taken on new meaning in recent days as the Senate once again gathers to consider charges of high crimes and misdemeanors against a president. The Clinton trial, the only time in anyone’s lifetime until now that an occupant of the White House has been judged by the Senate, serves as the template for how President Trump will be judged on accusations of abusing his office for political gain and obstructing Congress.

Much of what is heard now in the halls of the Capitol sounds familiar — invocations of constitutional duty, encomiums to the rule of law and complaints about witch hunts and partisan coups. Even many of the players are the same. Two of the House managers prosecuting Mr. Trump, Jerrold Nadler of New York and Zoe Lofgren of California, were among Mr. Clinton’s Democratic defenders on the House Judiciary Committee. At Mr. Trump’s defense table will sit Ken Starr, the independent counsel whose investigation prompted the Clinton impeachment.

But there were differences as well, and not just the nature and substance of the charges, which are significantly disparate. While Mr. Clinton opened his trial reasonably confident that he would not be convicted, much as Mr. Trump is today, he could not be quite as sure. He did not command his party the way Mr. Trump does today. Democrats were angry at Mr. Clinton and unafraid to express it out loud in a way that Republicans do not publicly admit to feeling about Mr. Trump.

As the trial opened in January 1999, Senator Tom Daschle of South Dakota, the Democratic minority leader, thought five or six of the 45 Democrats might vote to convict Mr. Clinton, not enough to give Republicans the two-thirds majority needed for removal but potentially enough to change momentum or even to raise pressure on the president to resign. In a worst-case scenario, Mr. Daschle counted up to 20 Democrats who could go against Clinton — highly unlikely, but not impossible.

During closed-door meetings, seven or eight Senate Democrats got up and suggested they would have been better off if Mr. Clinton had stepped down. “Clinton should have resigned,” Senator Ernest F. Hollings of South Carolina declared in one of those sessions. “If he had an ounce of honor, he would have done it a long time ago.”

Moreover, hanging over the trial was an X-factor never formally acknowledged during the proceedings. Juanita Broaddrick, an Arkansas nursing home operator, had given an interview to Lisa Myers of NBC News accusing Mr. Clinton of raping her 20 years earlier.

Nervous about airing an allegation it could not definitively verify, NBC held the interview until after the trial. But it was enough of an open secret that Senator Charles E. Grassley, Republican of Iowa, wore a “Free Lisa Myers” button on the Senate floor during the trial.

All of which is why the White House was furious when Mr. Daschle cut a deal with Senator Trent Lott of Mississippi, the Republican majority leader, on rules for the trial that ultimately passed 100 to 0. Mr. Clinton knew that Republicans would never be able to force him from office, but Democrats could and so it was in his interest to keep the proceedings as partisan as possible so that his party would stick with him.

A unanimous bipartisan vote to start the trial meant that the White House could not complain that the proceeding was rigged against the president. Mr. Clinton called several Democratic senators and railed about the agreement. John D. Podesta, the White House chief of staff, called Mr. Daschle’s aides to deliver his own profanity-laden complaint, mocking the senators for “preening their little unity dance.”

But Mr. Lott and Mr. Daschle had their own interests, and they were not the same as the president’s. The two shared a mutual revulsion at what they saw as the highly partisan food fight in the House and, unlike today’s Senate leaders, vowed to work together to preserve the dignity and decorum of the Senate without an ugly meltdown. In a telephone call with Mr. Lott after the House vote, Mr. Daschle agreed to help “co-pilot the plane” to a safe landing.

The two were so determined to keep control of the trial that their staffs made clear to Chief Justice William H. Rehnquist, who in keeping with the Constitution would preside, that they considered his role quite limited and that it would be up to the Senate to decide key questions such as whether to have witnesses.

In case the message was not clear, the chief justice got a pointed reminder during a tour of the chamber before the trial opened.

“How do I activate the microphone?” he asked.

“You don’t,” answered the sergeant-at-arms. The Senate staff would control that.

Indeed, during periods when senators negotiated how to proceed, the chief justice idled in a back room reading briefs or, at least once, playing poker with aides — until the sergeant-at-arms caught him and gently reminded him that he was breaking Senate rules.

Mr. Daschle’s collaboration with Mr. Lott would not keep him from ultimately saving Mr. Clinton’s presidency. While Senator Mitch McConnell of Kentucky, today’s Republican leader, has pledged “total coordination” with the White House to manage the trial, Mr. Daschle considered direct communication with Mr. Clinton to be inappropriate. But their staffs were in touch and at times worked in tandem.

During the question-and-answer period of the trial, for instance, the White House counsel Charles F.C. Ruff worked out a secret signal with Mr. Daschle’s Democratic staff whenever he needed an opportunity to speak.

When Mr. Ruff laid his pen down on the table in front of him, the Democratic staff members submitted an open-ended question on a notecard for Chief Justice Rehnquist to read asking if the White House legal team wanted to respond to anything the House managers had said. Even Mr. Ruff’s fellow White House lawyers did not know what the secret signal was.

While the House managers wanted to call as many as 16 witnesses, they ran into a bipartisan wall in the Senate. Mr. Lott was no more interested in dragging out the trial than Mr. Daschle, and few if any senators in either party were excited about the idea of Monica S. Lewinsky being interrogated on the Senate floor about her sexual encounters with Mr. Clinton.

In the end, while Democrats opposed witnesses, Senate Republicans agreed to let the House managers call three: Ms. Lewinsky; Vernon E. Jordan Jr., the president’s friend; and Sidney Blumenthal, a White House aide. They were not brought to the Senate floor, but interviewed elsewhere in videotaped depositions. Clips were then shown to the senators by each side.

The depositions changed no minds. After a month of arguments, the Democrats stuck with Mr. Clinton after all and he was acquitted handily on Feb. 12, 1999, with five Republicans voting to acquit him on one of the articles of impeachment and 10 on the other. The managers mustered no better than a 50-to-50 vote, not even a simple majority, much less the two-thirds threshold required by the Constitution.

For Mr. Lott and Mr. Daschle, though, the most important verdict was the one rendered about the Senate itself. The explosion they had feared had been averted. The two leaders met in the middle of the aisle to shake hands.

Commentary Kevin Williamson - January 22, 2021
0
It seems like it is always her first day on the job. ...
MORE STORIES