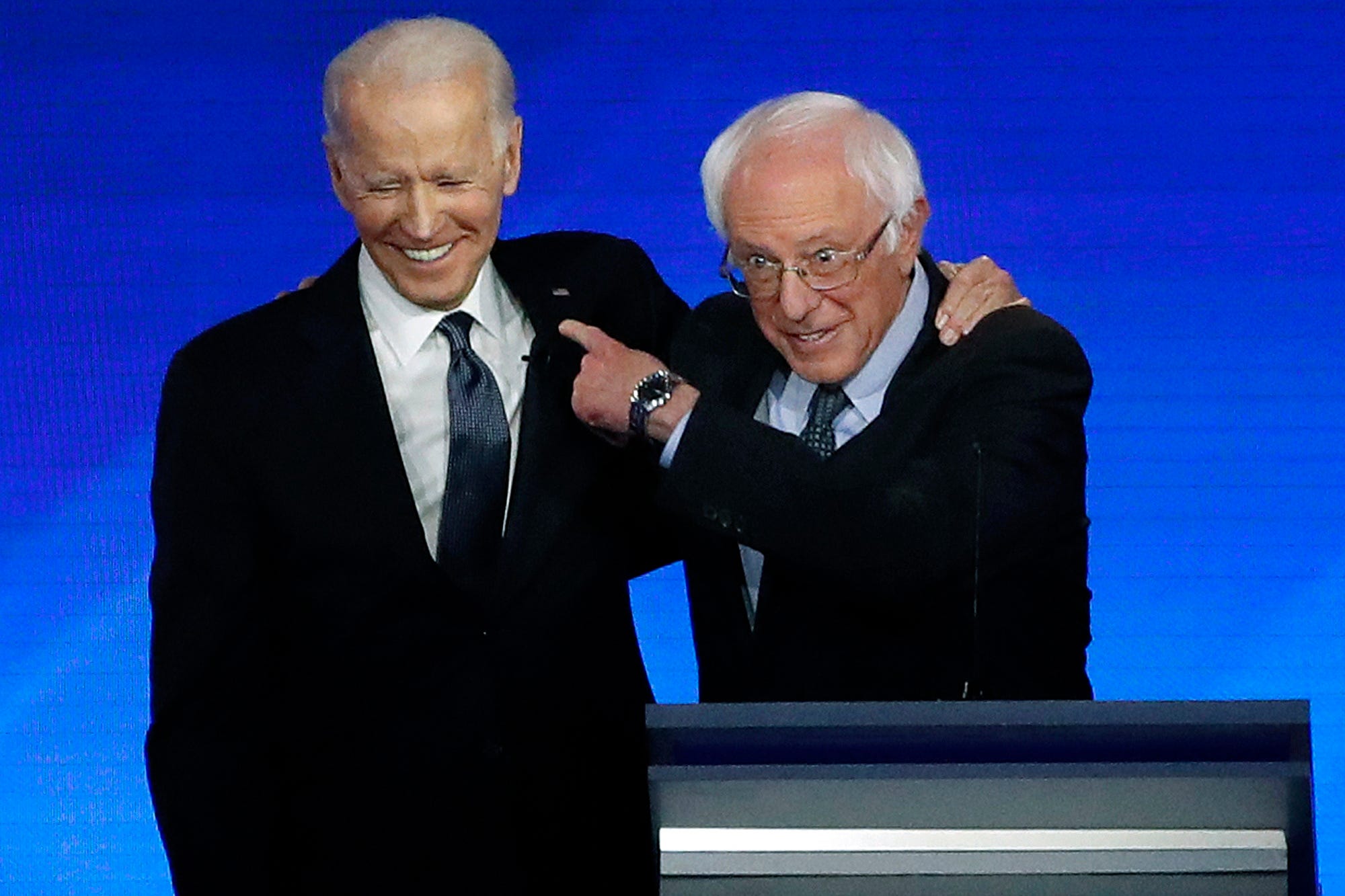 President Donald Trump and his surrogates are trying to cast Democratic presidential nominee Joe Biden as a “Trojan horse” who is campaigning for the White House as a moderate but if elected, would unleash a socialist, left-wing agenda on the country.

But the argument may fall flat, political experts say, because Biden doesn’t fit the image of a wild-eyed liberal – and his record doesn’t match up with the GOP rhetoric.

The strategy would have been far easier if Democrats had nominated a progressive candidate, such as Sen. Bernie Sanders of Vermont, political strategists say. But it’s hard to vilify a centrist.

“The best political attacks are those that have the virtue of being true, especially if they can use an opponent’s own words verifying that truth in a political ad,” said Whit Ayres, a longtime Republican pollster at North Star Opinion Research. “They are not true of Joe Biden, based upon his decades of experience in elected office. The Trojan horse attack is the best they can do, given his record.”

Biden said Monday in a Pittsburgh speech that voters knew him and his story. Biden spent 36 years in the Senate and has been criticized as too close to corporate interests and during the presidential campaign as too tough on crime. But he has adopted more progressive positions to unite different segments of the party.

“Ask yourself: Do I look like a radical socialist with a soft spot for rioters? Really?” Biden said.

The dueling messages come as polls are tightening with less than two months before the Nov. 3 election.

Biden leads Trump nationally in a new USA TODAY/Suffolk University poll, 50% to 43%, and in nine out of 11 battleground states, according to Morning Consult. But the race remains fluid. Biden’s 7-percentage-point advantage in the Suffolk poll is narrower than the 12-point lead he held in the survey in June.

The contrast between the candidates was crystal clear this week in Kenosha, Wisconsin, the scene of violent protests after the police shooting Aug. 23 of Jacob Blake, who was left paralyzed.

“Reckless, far-left politicians continue to push the destructive message that our nation and our law enforcement are oppressive or racist,” Trump said, without mentioning Biden by name.

Biden met Thursday with Blake’s relatives in Milwaukee and spoke with him by phone before meeting with Kenosha residents, to hear their concerns in a church. Biden said if elected, he would create a White House commission with police and civil rights activists to address the country’s institutional racism he said still exists after 400 years.

“This is the first chance we’ve had in a generation, in my view, to deal and to cut another slice off of institutional racism,” Biden said.

Trump:Trump accused of describing war dead as ‘losers’ and ‘suckers.’ He denies allegations. Here’s what we know

A Morning Consult/Politico poll conducted Aug. 12, after Biden selected Sen. Kamala Harris, D-Calif., as his running mate, found the Democratic ticket is viewed as more moderate than the GOP ticket of Trump and Vice President Mike Pence. The poll asked 1,990 registered voters to place the candidates on a scale from 1 meaning “very liberal” to 7 meaning “very conservative.” The results placed Biden at 2.8 and Harris at 2.5 – closer to the moderate center of 4 – than Trump at 5.8 and Pence at 6.

“The Trump campaign’s attempt to frame Harris as a radical who would be the one actually pulling the strings in a Biden administration also faces another roadblock: Trump and Vice President Mike Pence are perceived as more extreme than either candidate on the Democratic ticket,” said the Morning Consult report on the poll.

In fact, Biden has drawn fire from progressives over policies they view as too moderate. As a senator, Biden authored crime legislation in 1994 that led to more and longer prison sentences. His goal to shift the country to clean energy by 2050 was two decades later than progressives sought. And on immigration, Biden faced questions about the Obama administration deporting record numbers of undocumented immigrants while he served as vice president, in contrast to progressive advocacy for an easier path to citizenship.

Still, the Republican accusations have been steady and repetitive. Trump, Pence, former New York Mayor Rudy Giuliani and former South Carolina Gov. Nikki Haley each referred to Biden at the Republican National Convention as a “Trojan horse” for a left-wing agenda.

Let the voting begin:North Carolina presidential ballots are being sent out. What you need to know about Election Day.

One target of criticism was a 110-page platform blueprint that Biden’s team negotiated with Sanders’ team, to unify Democratic Party positions for dealing with climate change, policing and immigration.

Trump slammed the “Biden-Bernie manifesto” at the GOP convention and elsewhere for seeking to end travel bans and increase refugee admissions. Trump attacked Biden for refusing to disavow Rep. Ilhan Omar, D-Minn., who criticized the Minneapolis Police Department as “rotten to the root” after the May 25 death of George Floyd in police custody.

“Biden is a Trojan horse for socialism,” Trump said. “If Joe Biden doesn’t have the strength to stand up to wild-eyed Marxists like Bernie Sanders and his fellow radicals – and there are many, many, we see them all the time, it’s incredible, actually – then how is he ever going to stand up for you? He’s not.”

Haley said a Biden administration would be “much, much worse” for America than the Obama administration because of Sanders and the “squad” of House members including Omar and Reps. Alexandria Ocasio-Cortez of New York, Rashida Tlaib of Michigan and Ayanna Pressley of Massachusetts.

“Joe Biden and the socialist left would be a disaster for our economy,” Haley said.

Biden, Trump on military:As Trump’s troop remarks come under fire, a look at how he and Biden differ on military

Trying to link Biden to Sanders or Omar is “something you do when Biden himself is just not scary enough,” said Ramesh Ponnuru, a visiting fellow at the American Enterprise Institute and senior editor at National Review.

“Some of it may be that there are not great strategic options available to them,” Ponnuru added. “For example, not just the socialist argument, but the caricature that Biden is a kind of senile, drooling moron – that’s been overdrawn in an extraordinarily self-destructive way by the Trump people. It clearly lowered the bar for Biden’s acceptance speech and is lowering the bar for any debates.”

It’s not clear how much influence the progressive wing of the Democratic Party would have in a Biden administration. Sanders said he continues to have disagreements with Biden about more progressive positions on climate legislation or providing health insurance for everyone. And Ocasio-Cortez used her speaking slot at the Democratic National Convention to tout Sanders for president.

But Sanders has also said Biden would be “the most progressive president since Franklin Delano Roosevelt” if their platform blueprint were enacted with provisions such as a $15 minimum wage and a shift to clean electricity within 15 years.

“It’s a different agenda from mine, no question about it,” Sanders said on “The Late Show with Stephen Colbert.” “But it is a strong, progressive agenda.”

Grant Reeher, a political science professor at Syracuse University and director of the Campbell Public Affairs Institute, said hyperbole is common in politics and voters are used to Trump’s exaggerations.

“I think a lot of this is just taking advantage of ‘targets of opportunity,’” Reeher said. “Democrats, especially those generating the most enthusiasm within the party, are asserting some pretty left proposals, relatively speaking.”

So what impact are the socialist and radical labels having?

Ayres said the labels will work with people who already support Trump, but not necessarily with others.

“The question is whether it will be persuasive to people who are not,” Ayres said. “Only time will tell on that question.”