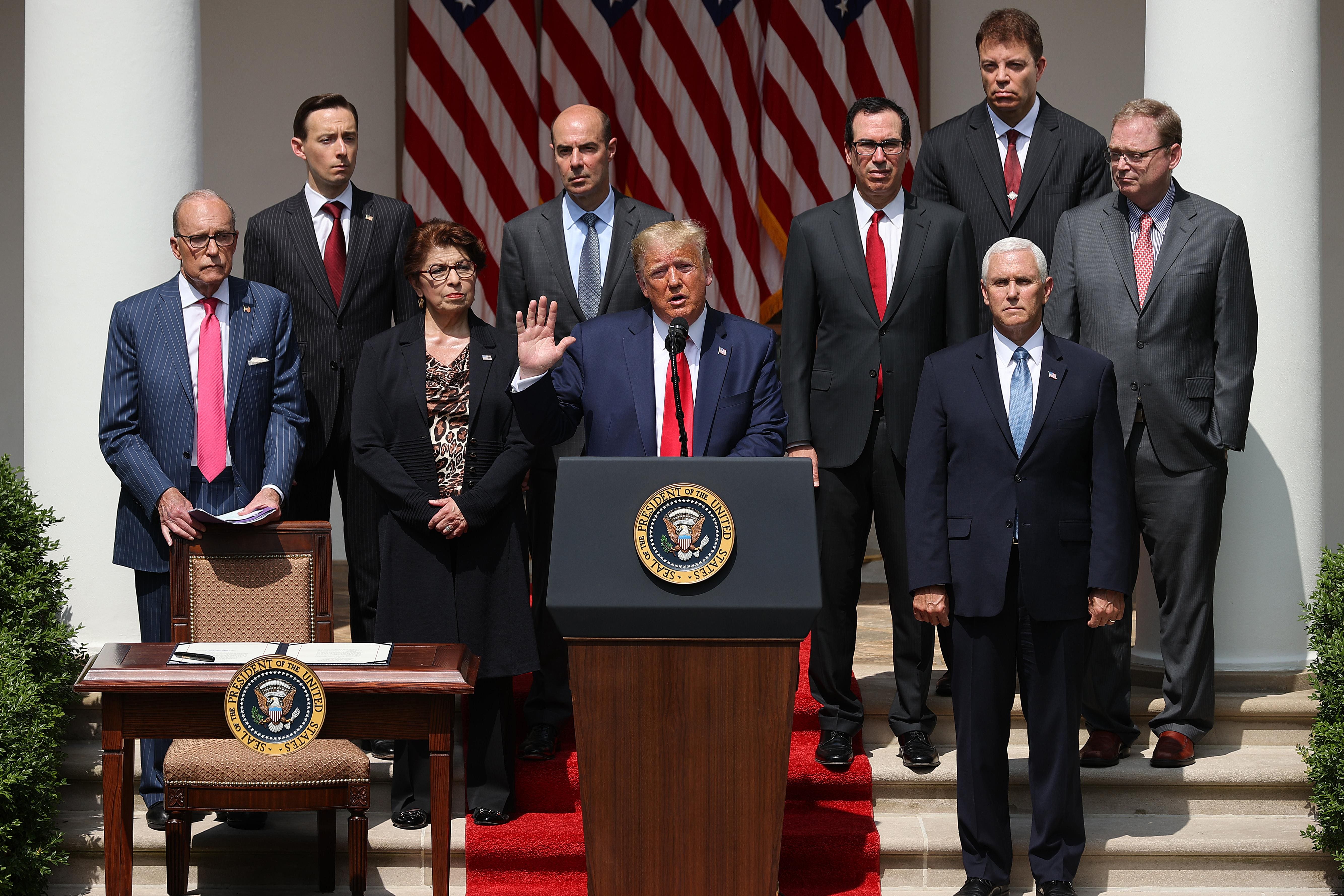 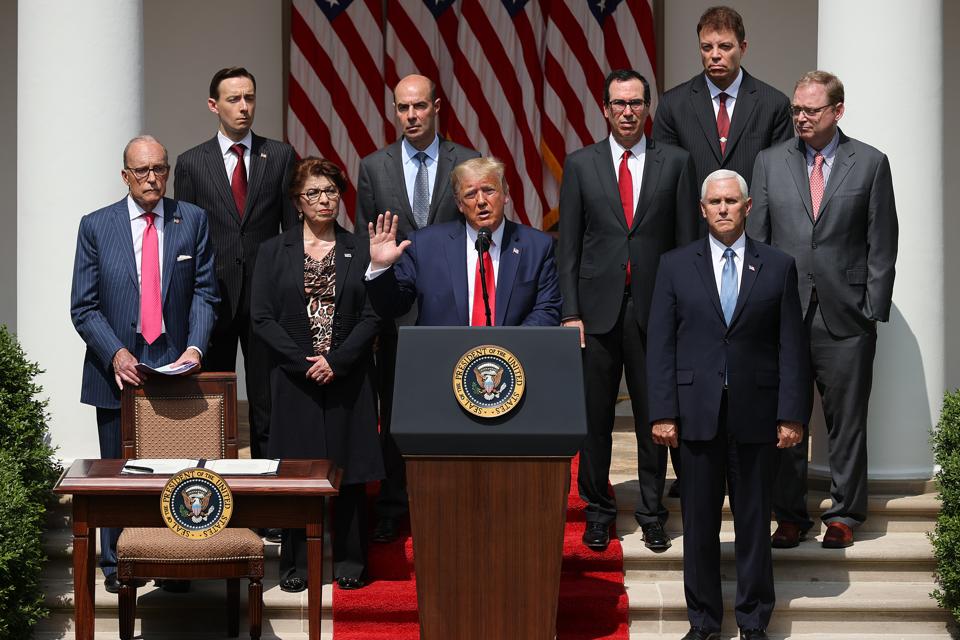 WASHINGTON, DC – JUNE 05: U.S. President Donald Trump speaks during a news conference in the Rose … [+] Garden at the White House June 05, 2020 in Washington, DC. In the midst of nationwide protests against the death of George Floyd, the U.S. Labor Department announced the unemployment rate fell to 13.3 percent in May, a surprising improvement in the nation’s job market as hiring rebounded faster than economists expected in the wake of the novel coronavirus pandemic. (Photo by Chip Somodevilla/Getty Images)

On Friday, I reported on the data released from the Department of Labor’s Bureau of Labor Statistics, indicating that 2.5 million jobs were added in May. This was followed by an enthusiastic take on how the United States may be turning the corner. Despite all of the negatives, it seemed the U.S. was seeing rays of hope. The stock market, which has shot up since the initial shocks of the Covid-19 pandemic, bolted up after the report, gaining over 700 points and referred to other positive developments.

Unfortunately, after delving into the footnotes of the numbers, it now looks like the jobs report has been inaccurate for the last two months. BLS has admitted that government household survey takers mistakenly counted about 4.9 million people as employed, although they were unemployed.

Had the mistake been corrected, the unemployment rate would have risen to 16.1% in May. The corrected April figure would have been more than 19.5%—rather than 14.7%.

The official response was that the government doesn’t correct its survey results for fear of the appearance of political manipulation.

The Labor Department acknowledged that for the last two months, it was aware of this issue, but didn’t widely report it or make the necessary adjustments. The big question is whether or not this was purposely done or a typical government blunder.

“It’s going to be a problem of credibility now with the BLS,” said Mike Wolford, Director of Customer Success at Claro Workforce Analytics. “[BLS] looks incompetent or political. Twenty million people didn’t finish unemployment in the last 30 days. I would have thought lag time was an explanation because it’s a lot to count actually, but to find out they made a five-million-person error, knew about it, didn’t correct it for the sake of ‘data integrity’ when they literally update things all the time. That is suspicious and, at least, merits investigation,” Wolford added.

There’s a lot at stake, especially since the U.S. has the upcoming presidential election in November. America was able to see in real time how President Donald Trump quickly held a press conference and bragged about the great employment numbers and the stock market’s skyrocketing rise. Ironically, when Trump talked about the figures in his press conference, he poked fun at the economists and professional investment prognosticators for all being wrong. He belittled them for claiming that we’d be at 20% unemployment and said it was “the greatest miscalculation.”

The economy, job market and stock market are his crowning achievements. It’s even more important as he’s dealing with blowback due to his administration’s handling of Covid-19 in the early days, plus presiding over the riots.

Additionally, there are several other important matters that are glossed over too. The trillion-dollar stimulus package offered forgivable loans to companies if they retain staff for a specified period of time. There’s reason to believe that a good portion of these workers may be let go once they meet that time threshold in October.

A recent analysis from the Becker Friedman Institute at the University of Chicago estimated that 42% of people furloughed will never get their old jobs back and only 30% of those laid off will land new jobs later this year. Some companies have already acknowledged that they will layoff workers once they meet their obligation.

People who have finished collecting unemployment benefits, but did not find new jobs, fall off the government’s radar and are not accounted for in the official unemployment statistics. In an interview with “Face the Nation” back in 2015, Trump specifically called out then President Barack Obama, referring to unemployment data, saying “it’s a phony number” and lambasted the practice of ignoring people who’ve given up looking for a job by excluding them from the unemployment statistics.

There has been a large number of complaints from both state unemployment offices and people who’ve tried to apply for claims that they were not able to get through nor receive benefits. The offices said that they were not prepared and didn’t have the staff and technology to satisfactorily service the overwhelming volume. In light of the recent “miscalculation” in the official employment  data, it would be reasonable to question if there were other motives at play to suppress the payment of benefits.

A curious and questionable part of ascertaining the employment figures is based on “household surveys” of about 60,000 families. This data is based upon assumptions and estimates. The monthly jobs report is based on surveys. Unlike the U.S. Census, which seeks to actually count every person living in the U.S., unemployment data is not an actual count of the number of jobs added or the number of unemployed people. There are more than 162 million Americans in the labor force and there are nearly seven million business establishments in the U.S. today. To count them all each month would be a Herculean logistical feat.

The U.S. government also relies upon something called the “Birth-Death Model.” This is a model related to businesses that start up and those that fail. The government uses models to calculate how many jobs were gained or lost, as businesses started and shut down. Clearly the Covid-19 months would reflect considerably less new business startups and far more closures, but using a model that’s not updated would offer faulty information. We’ve already seen the medical professionals’ models predicting millions of deaths, due to Covid-19, were far from accurate.

So far, the stock market is looking past this miscalculation. As of Monday morning, investors are optimistic as futures point to an open with a 200 point increase.