LOS ANGELES — Dressed in Oxford boots, jeans and a long sleeve T-shirt, Hunter Biden ushered a reporter down a stone walkway, into a pool house-turned-art studio in the Hollywood Hills.

It was filled with colorful works of decorative abstraction — psychedelic florals and ethereal patterns that look like nature viewed through a microscope, leaning toward the surreal. There were nearly 100 of them, all by his own hand. Some were signed RH Biden, for Robert Hunter Biden, the 50-year-old son of the former vice president.

“What do you see?” he asked, shifting bottles of ink and a bamboo wok brush.

The more critical question might be: How does it look to the outside world?

For an “unknown” artist, his name is very well known, for all the wrong reasons.

President Trump’s request for foreign help to investigate Mr. Biden’s role with a Ukrainian gas company, Burisma, set the president’s impeachment in motion. Republicans continue to press for a separate investigation into Mr. Biden’s work for the firm. Democrats worry that his curious overseas dealings could pose a threat to his father’s presidential campaign, should he rally back to front-runner status in the March primaries. 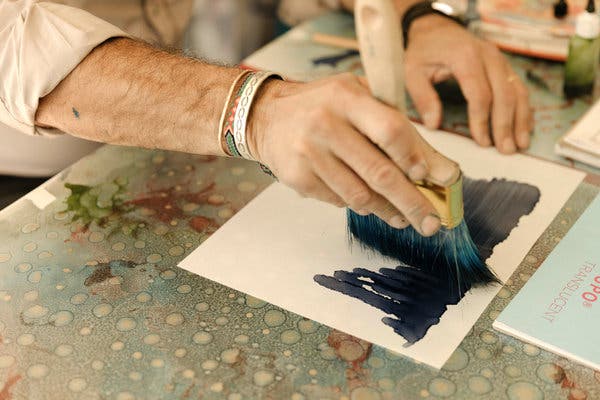 Mr. Biden explores the fluidity of ink at his painting studio in Los Angeles. He has no formal art training but has sketched since childhood.Credit…Elizabeth Weinberg for The New York Times

Hunter Biden was not certain what the world might say of his new pursuit, but he maintained he was serious. He said he had made a lot of mistakes in his life — he has spoken openly about his history of drug addiction — but becoming an artist, he said, wasn’t an impulsive decision.

Painting “is literally keeping me sane,” he said. “For years I wouldn’t call myself an artist. Now I feel comfortable saying it.”

Waiting for Doors to Open

As an undiscovered artist, he is better situated than most: living in a rented, 2,000-square-foot house in the Hollywood Hills off Mulholland Drive, with a Porsche Panamera in the driveway, plenty of natural light and a pool house he has transformed into an art studio.

From the edge of the sloping property — it was leased for $12,000 a month starting last June 15, according to the homeowner — he has a view onto the San Fernando Valley below: Burbank and Universal Studios to the east, the 405 freeway to the west.

“See that red barn?” He pointed at a farmhouse perched on the next mountain top — it belongs to the artist David Hockney, he said — then focused on four red-tailed hawks rising on pockets of hot air, a technique called thermal soaring. “Look at that,” he said, craning his neck. “I see them every day. I love watching them.”

In the early mornings, he paints in silence in a studio with a TV that does not get cable news. At midday, “I have a rough idea of a finished product, I take a break” and blast country music. “Right now a lot of Sturgill Simpson’s ‘Sound & Fury,’” he said during a reporter’s visit last fall.

After the break, he goes back to work, always drawing from memory, never models. Buried in layers of ink were twisting faces and organs, warm yellows to melancholy blues and angry reds — morphing shapes within shapes. He said it can take 14 layers of alcohol ink for the material to adhere to the nearly indestructible Japanese Yupo paper he uses as his canvasses. He blows the ink with a metal straw — it is fast-drying and “has a natural progression, and you have to be really focused in order to be able to alter it to your own imagination,” he said.

Some of his images looked eerily reminiscent of the artist, and his father, but the suggestion was rejected: “They’re no one.”

His fingers and forearms were paint stained, blacks and reds deep under his nails, flecks on his jeans and boots, something his wife, Melissa Cohen, whom he married in May after a weeklong courtship, can’t stand. “I always get my pants dirty,” he said. “I don’t even notice it, but Melissa hates it.”

Ms. Cohen, who is pregnant with the couple’s first child, is a South African-born filmmaker in her early 30s who lived in Israel for several years. The day after their first date, Mr. Biden tattooed the Hebrew word “shalom” — for peace — on his left bicep, giving the couple matching tattoos. (He also has a tattoo of New York’s Finger Lakes region on his back, because his mother grew up there.) “It’s very abstract, sometimes very dark,” Ms. Cohen said of her husband’s art. “It draws a lot from nature.”

Mr. Biden set out late last year to find gallery representation with the help of Lanette Phillips, who is not a typical artist’s agent. She’s a video producer who ran a management company with clients including Quentin Tarantino and Darren Aronofsky. A longtime Biden family friend, she hosted a star-studded fund-raiser for the former vice president last November at the Pacific Palisades home she shares with Rick Lynch, a partner in an entertainment marketing firm. Mr. Biden did not sign with a gallery, and Ms. Phillips said this week that she is no longer advising him, but Mr. Biden is still setting his sights on exhibiting his work.

Normally, the art world is a fine place to make the right friends, attend the right parties, a venue more forgiving than Washington, D.C. But Mr. Biden could have a challenge convincing the public that the word “artist” belongs in his CV, coming after his careers as a lawyer, lobbyist and director of private equity firms.

He has no formal training as an artist, but he said that he has sketched off and on since age 7, and that he wasn’t dabbling: “It’s something I’ve taken seriously for a long time but hasn’t necessarily been for public consumption.”

Will the Biden name turn the art world off, or make it more interested?

“Probably both,” said the collector Beth Rudin DeWoody, the president of the Rudin Family Foundations and board member of the Whitney Museum of American Art and the Hammer Museum.

Ms. DeWoody had not seen Mr. Biden’s paintings, but she said she “loves the idea” of this unknown jumping in. “There’s probably going to be a lot of curiosity,” she said. “If he turns out to be a great artist.”

“Too much baggage,” he said, comparing Mr. Biden to actors like Sylvester Stallone or Michael York who tried to cross over but failed to achieve critical success. “The transition doesn’t work because the public perception has been established.”

“Depending on his skill level, the paintings could be quite good,” Mr. Kohn added. “However, it will be a long time before he will break into the art world as I and my colleagues know it.”

For years, vodka and cocaine were constant companions. Mr. Biden has talked often of facing the twin demons of addiction and personal loss. His mother Neilia and sister Naomi died in a 1972 car wreck, in which 2-year-old Hunter suffered a severe head injury.

Later, as he looked to escape temptations, the painting became therapeutic, he said. So did writing poems and short stories (he was accepted into Syracuse University’s creative writing program in 1993, but chose law school). Recently, he said, he has been writing letters to his deceased brother Beau, who succumbed to brain cancer in 2015, a loss that sent Mr. Biden off on a four year nightmare.

“I was addicted to crack for four years,” he said. “I went through a really long period of addiction and I was at a point where I didn’t read, write, think. I don’t do things halfway. That can be a problem.”

Mr. Biden moved to Los Angeles in early 2018 after his divorce from Kathleen Buhle, with whom he has three children, was finalized. He had also ended a relationship with his brother Beau’s widow, Hallie.

This past November, a paternity suit revealed he was the father of a toddler; he had met the child’s mother in Washington. On Wednesday, a judge ordered Mr. Biden to come to Arkansas, where the mother lives, for a March deposition. The mother’s lawyer said that, among other things, he wanted to know whether Mr. Biden was making money from his art.

Mr. Biden’s lawyer said his client could be available in April, but the judge, noting that Mr. Biden reported in court filings that he was unemployed, said, “I haven’t heard any good cause why he cannot make this a priority.”

There has been no proof of any wrongdoing by Mr. Biden related to his business dealings in Ukraine. He declined to answer questions about them, although in an October interview with ABC News, he admitted to “poor judgment” in accepting the role with Burisma, the Ukrainian energy company, in 2014, around the same time his father, as vice president, was leading the Obama administration’s efforts to root out corruption in the Ukrainian energy industry.

Mr. Biden, who was reportedly paid $50,000 a month by Burisma, remained on the board until April 2019, when his term expired.

In 2015, he began working for a Romanian oligarch, Gabriel Popoviciu, who was facing corruption charges. This fall, he stepped down from the board of a Chinese firm, stating he would not work for or with any foreign-owned companies if his father became president.

But perception rules. Even if no laws were broken by him, Mr. Biden has made questionable choices.

At his studio, Mr. Biden talked about his work while puffing an e-cigarette, and staring into the distance. The soaring hawks came back into view. “See them, it’s a family,” he said. “There were three yesterday, now there are four. That’s special.”

Painting “puts my energy toward something positive,” he added, speaking with a sort of recovery wisdom — he’s been to rehabilitation facilities seven or eight times, he said. “It keeps me away from people and places where I shouldn’t be.”

“I want to protect this place,” he said. “The one thing I have left is my art. It’s the one thing they can’t take away from me or conflate with anything else.”