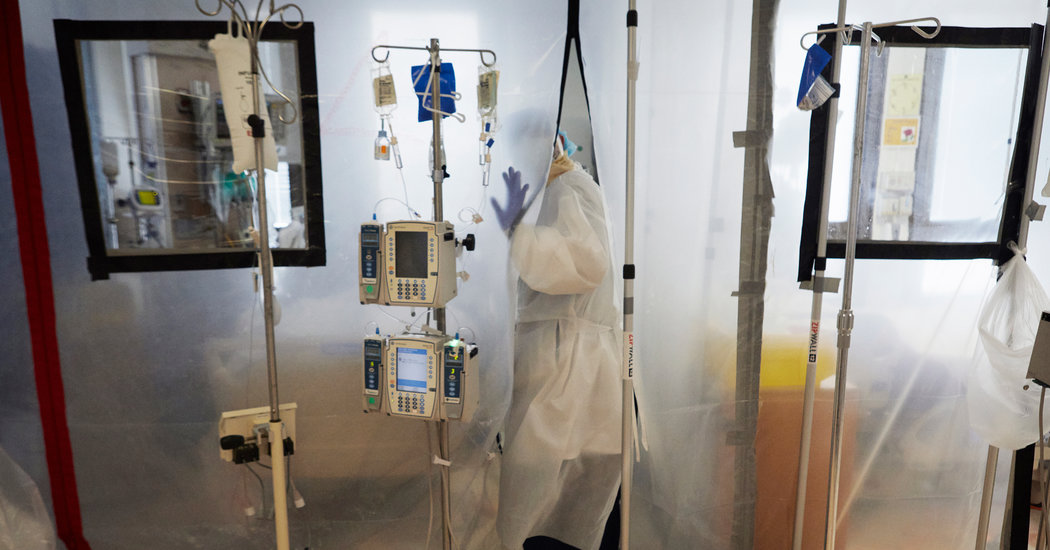 WASHINGTON — Long considered the world’s premier public health agency, the Centers for Disease Control and Prevention has fallen short in its response to the most urgent public health emergency in its 74-year history — a pathogen that has penetrated much of the nation, killing more than 100,000 people.

The agency made early missteps in testing and failed to provide timely counts of infections and deaths, hindered by aging technology across the U.S. health system. It hesitated in absorbing the lessons of other countries, and struggled to calibrate the need to move fast and its own imperative to be cautious. Its communications were sometimes confusing, sowing mistrust, even as it clashed with the White House and President Trump.

“They let us down,” said Dr. Stephane Otmezguine, an anesthesiologist who treated coronavirus patients in Fort Lauderdale, Fla.

The agency issued a statement saying it was “providing the best, most current data and scientific understanding we have.”

But a New York Times review of thousands of emails, and interviews with more than 100 state and federal officials, public health experts, C.D.C. employees and medical workers, documents how the Covid-19 pandemic shook longstanding confidence in the agency and its leader, Dr. Robert R. Redfield. These are some of the key findings.

As the virus began to spread in the United States in January, the C.D.C.’s response was hampered by an antiquated data system and a fractured public health reporting system across the U.S., relying in part on information assembled or shared with local health officials through phone calls, faxes and thousands of spreadsheets attached to emails.

The C.D.C. could not produce accurate counts of how many people were being tested, compile complete demographic information on confirmed cases or even keep timely tallies of deaths. Backups on at least some of these systems are made on recordable DVDs, a technology that was state-of-the-art in the late 1990s.

The overall result was an agency that had blind spots at just the wrong moment. The disconnect between hospital record-keeping systems, the C.D.C. and state and local public health departments delayed sharing critical information that could help patients.

The C.D.C. clashed with White House aides who viewed them as the ‘deep state’

As the crisis deepened, tensions between the agency and the White House increased, with aides to Mr. Trump referring to the scientists at the C.D.C. as members of the “deep state” who were eager to wound him politically by leaking to the press.

At the same time, some C.D.C. employees watched with growing alarm as Mr. Trump, facing criticism for his administration’s response, repeatedly undermined the agency. And they paled at what they saw as meddling by politically motivated Trump aides.

Mr. Trump and his aides often expressed extraordinary skepticism about the virus and the steps that would have to be taken to curb it. He said the virus would disappear “like a miracle” even as C.D.C. scientists described it as a real threat. When the C.D.C. urged Americans to wear masks, he said, “I don’t see it for myself.”

Just before Memorial Day weekend, Mr. Trump ordered the C.D.C. to issue guidance that would allow churches to reopen. “I said, ‘You better put it out,’” Mr. Trump told reporters. “And they’re doing it.”

“I would expect the C.D.C. to coordinate with the White House,” said Lawrence Gostin, the director of a legal center at the World Health Organization and a former C.D.C. official. “But this is not team work. This is not coordination. This is confrontation.”

The C.D.C.’s culture slowed its response

The culture at the C.D.C. — risk-averse, perfectionist and ill suited to improvising in a quickly evolving crisis — shaped its scientists’ ambitions and contributed to some of its failures as it tried to respond to the pandemic.

“It’s not our culture to intervene,” said Dr. George Schmid, who worked at the agency off and on for nearly four decades. He described it as increasingly bureaucratic, weighed down by “indescribable, burdensome hierarchy.”

Former officials said the C.D.C.’s culture locked some of the agency’s employees into a fixed way of thinking, helping to produce its first and most consequential failure in the crisis: its inability early on to provide state laboratories around the country with an effective diagnostic test.

The culture — along with the failure of the test — also contributed to the agency’s decision to restrict who could get tested in the early days of the crisis. When doctors in Washington State and elsewhere forwarded the names of about 650 people in January who might have been infected, the C.D.C. agreed to test only 256.

“If we were able to test early, we would have recognized earlier” the scale of the outbreak, said Dr. Jeffrey Duchin, the chief health officer in King County, Wash. “We would have been able to put prevention measures in place earlier and had fewer cases.”

The coronavirus pandemic underscored the need for Dr. Redfield to manage the mercurial demands of the president who appointed him and the expectations of the career scientists at the agency he leads.

White House aides saw Dr. Redfield as an ally, but his meandering manner irritated a president drawn to big personalities and assertive defenders of his administration. Although he is on the White House coronavirus task force, Dr. Redfield soon found himself eclipsed by Dr. Anthony S. Fauci, the nation’s most famous infectious disease specialist, and Dr. Deborah Birx, an AIDS expert and former C.D.C. physician.

While praising his friend as “a terrific, dedicated infectious disease doctor,” Dr. Gallo, who also co-founded the Global Virus Network, said in an interview that Dr. Redfield “can’t do anything communication-wise.”

Meanwhile, Dr. Redfield’s bonds with some of his own staff have frayed. One associate recounted him saying that the agency’s scientists had a “myopic” view of their roles, and characterized his relationship with his top deputy, Dr. Anne Schuchat, a career C.D.C. scientist deeply respected in the agency, as growing strained.

He has not been in Atlanta recently, shuttling instead between his home in Baltimore and the West Wing. One person familiar with his thinking described Dr. Redfield as feeling “a little bit on an island.”

As the national clearinghouse for critical public health information, the C.D.C. is supposed to provide medical guidance to health workers while offering easy-to-understand information for political leaders, business executives and the general public.

But the agency has struggled at times to provide clear and timely guidance, leading many to say they now look to universities, mailing lists or online research articles for detailed recommendations about how to safely care for infected patients.

After initially recommending that all doctors and nurses coming in contact with coronavirus patients wear N95 respirators, the C.D.C. announced that less protective surgical masks were “an acceptable alternative” except in some cases. The change angered health care workers like Lori Freeman, chief executive of the National Association of County and City Health Officials, who said that “mistrust crept in.”

As Miami Beach begins to reopen its economy, Mayor Dan Gelber said he wished the C.D.C. would provide more specific steps that cities should follow if cases surge again, adding, “It’s almost as if they just said, ‘Open up and figure out whether it’s a good idea or not afterward.”

An agency press officer said the C.D.C. has “issued countless guidance and recommendations based on the best available science and data,” pointing to 114 advisory documents for disaster and homeless shelters, retirement communities, taxis, pediatric clinics and other venues.