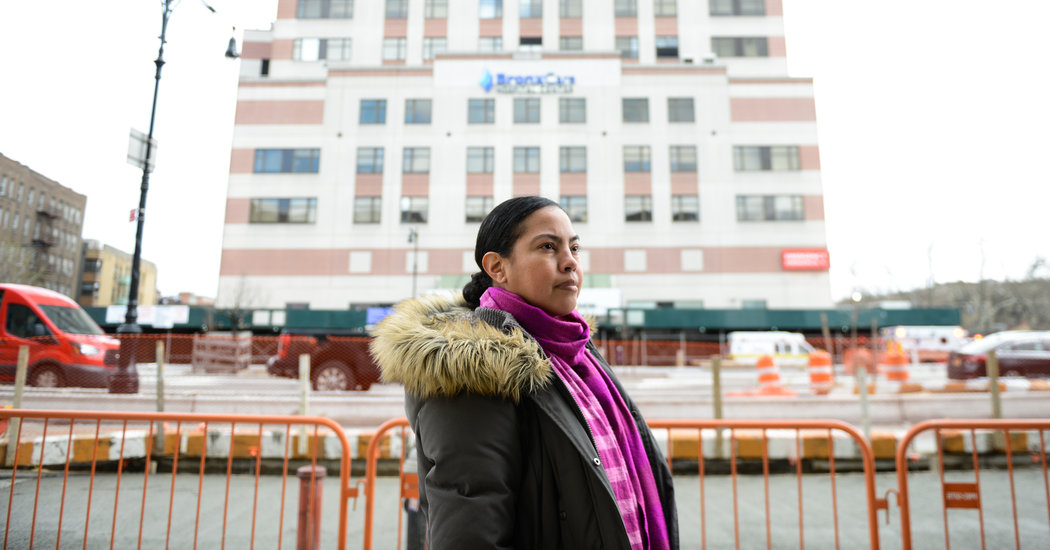 In the past week and a half, Cori Bush has been hospitalized twice with shortness of breath, sore throat, fatigue, loss of taste and a headache.

Told at first that she had pneumonia, she was sent home, only to return to the emergency room when her symptoms didn’t improve. A coronavirus test came back negative, but she was admitted anyway. She was discharged on Wednesday.

“I’m worried about the bill I’m going to receive,” she said. “I drove myself to the emergency room, even though I should have taken an ambulance, but I didn’t want that bill. And now the bill from the hospital stay, the bill from being admitted, and the doctor’s bill, which is all separate.”

Ms. Bush doesn’t have health insurance. She is also a candidate for Congress, trying for the second time to defeat Representative William Lacy Clay of Missouri, a 10-term incumbent, in a Democratic primary. She is one of several Democratic congressional candidates who gave up their employer-sponsored insurance when they decided to run for office, and whose platforms include expanding access to health care.

The choice between keeping their own health insurance or trying to help others get such coverage wasn’t one they made lightly. Now, with the coronavirus outbreak putting electoral politics on pause across the country, they must take extra care to protect their health as they fight to maintain momentum around their campaigns.

“It’s a difficult balance, and I have to be real with you, it’s a little scary, because I want to be out there,” said Samelys López, who is running in a crowded Democratic primary in New York’s 15th District and is seeking to succeed her former boss, Representative José E. Serrano, who is retiring.

“What if something does happen to me?” she said. “I have to be even more vigilant because I don’t have health insurance at the moment. And I think that is the reason we need to make the case for universal health care. We should have these things as a human right — I shouldn’t have had to make that choice.”

Nabilah Islam, one of several Democrats running to replace Representative Rob Woodall, a retiring Republican, in a district north of Atlanta, has not had insurance since 2018.

“It was something that I forwent because running for office is cost-prohibitive, and it’s expensive to pay for health care,” she said. “I can’t even qualify for Medicaid, even if I wanted to.”

Georgia is one of 14 states that have not expanded Medicaid under the Affordable Care Act, and Ms. Islam is one of more than 100,000 people in her district who are uninsured.

“God forbid I do get the virus,” Ms. Islam said. “I would go into medical debt, and that’s not just me, that’s over 20 percent of my district.”

As expensive as it can be to run for office, candidates without health insurance face even greater financial risks, since an unexpected ambulance ride or emergency room visit could put them thousands of dollars in debt.

Ms. Islam lost her insurance in 2018, when she left her job as the Southern states finance director at the Democratic National Committee. She bought a flimsy off-market plan the next year, while she was working with local campaigns in Georgia. But now that she’s running herself, she has no protections at all.

“When you run for office, you can’t do this part time. The deck is stacked against you if you do it part-time,” she said. “And if you are a wealthier person, you have the advantages of not really having to worry about health insurance. You’re able to run more freely.”

The prospect of going without health insurance, pandemic or not, can deter people from running for office, particularly those who are political outsiders.

“It’s one of these additional barriers for candidates who are working class,” said Hannah Nayowith, who served as campaign manager for Jessica Cisneros, who narrowly lost a primary race last month to unseat Representative Henry Cuellar, Democrat of Texas.

Ms. Cisneros ran a grass-roots campaign while uninsured, even though she provided insurance for her full-time staff. There were times she had to cross the border into Mexico for procedures and medication, because they were more affordable there.

Ms. Nayowith noted that the Democratic Party has often called for greater representation by candidates of color and working-class people. But many of those people are less likely to have health insurance.

“For folks that look like the kind of candidates that we want in this new era of politics,” she said, “it makes it even harder for them to do it.”

“The system wasn’t designed to elect people like me: working people, women of color,” Ms. Islam said. “And one of those structural barriers is health care.”

When Ms. Bush decided to run for a second time, it was hard for her to leave her job as a nurse in a community health clinic, particularly because she is a single parent of two children. In fact, she had planned to keep working until her campaign got off the ground.

“I was going to work for several months and then take off later in the race. It just didn’t end up happening that way,” she said. “It’s hard to keep a job or find a job when you’re running against an Democratic incumbent.”

She is doing her best to keep her campaign going while she recovers from pneumonia, staying present on social media until she feels healthy enough to become more active.

“We structured our campaign to where it continues to roll even when I’m sick,” Ms. Bush said. “We will be able to make it day by day. But once I’m back, I’m back.”

Ms. López left her job at the Local Initiatives Support Corporation, a nonprofit that backs community development initiatives like building homes for the homeless, to run.

She mulled the decision for months, and the prospect of losing her health insurance and her income was one reason it took so long to make up her mind. She had some savings, enabling her to take the leap, but she said that money would run out soon.

Right now, she said, her focus is on helping people in her Bronx district, where many people live in poverty and which has been hit particularly hard by the coronavirus. As her entire campaign operation moved online, she began using her network of volunteers not only to phone and text bank but also to try to get resources and supplies to those who needed them.

She’s currently staying isolated, since she knows her health is directly related to the well-being of her campaign.

“I feel like I’m being penalized,” Ms López said. “Just because we make a decision to be in public service and give back, doesn’t mean that we should be choosing between life, death and illness.”

Candidates who don’t have health care are often unable to provide insurance to their employees as well, leaving multiple layers of their campaigns vulnerable during a pandemic.

Isra Allison, Ms. Bush’s campaign manager, has worked for a string of grass-roots campaigns and, as a result, hasn’t had health insurance in four years.

“Having access to universal health care will give people more of the opportunity to plug in to a grass-roots campaign if it’s something that they’re passionate about,” she said.

Ms. Islam petitioned the Federal Election Commission in early January to be able to use campaign funds to pay for health insurance, seeking to level the playing field for candidates like her.

“I believe that if you’re on the campaign trail, you should be able to have health care,” Ms. Islam said. “Especially during a pandemic.”

She said she still hadn’t heard back.