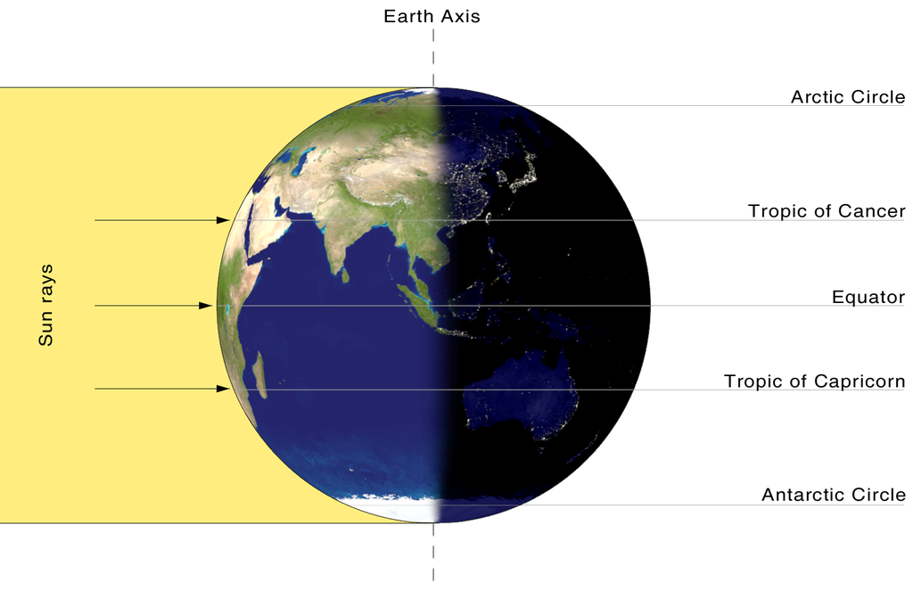 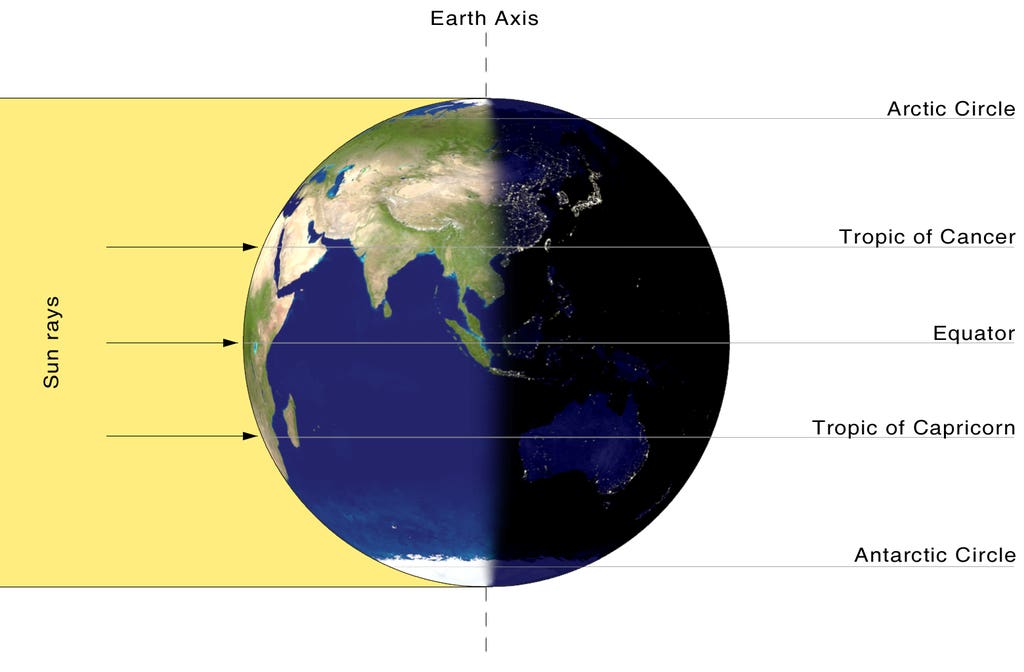 The equinoxes mark the exact moments when the Earth’s axis, as it revolves around the Sun in its… [+] orbit, is tipped perfectly perpendicular to the Sun’s rays. This only occurs twice a year: during the March and September equinoxes.

This year, on March 19, 2020, the equinox will occur. For a brief moment in time, the Earth’s axis will be oriented perfectly perpendicular to the Sun’s rays, marking the instant where we transition from one season (winter in the northern hemisphere, summer in the southern) to the next (spring in the northern hemisphere, autumn in the southern). This marks the first year since 1896 where the equinox occurs on March 19, rather than 20 or 21, for all timezones in the United States.

Those of us who grew up in the 20th century likely remember the equinox typically occurring on either March 20 or 21, never seeing a March 19 equinox until the onset of this new century. And now, as we move forward, the equinox will get earlier and earlier every four years, with even parts of Europe and Africa experiencing a March 19 equinox later this century. But this is exactly according to plan, and the science of our calendar explains why.

Even though the Earth always rotates on its axis, which is tilted at 23.5 degrees, the equinoxes are… [+] special for having that axial tilt be perpendicular to the Sun-Earth plane, rather than at an angle, which occurs on all other days of the year. Similarly, the solstices are what occurs at the midpoints between the equinoxes: when the Earth’s axis is maximally tilted with respect to the Earth’s orbital plane around the Sun. Our orbit’s elliptical nature is extremely important.

Unlike the solstices, where the Earth’s poles are maximally tipped towards the Sun in their orbit (June for the northern hemisphere, December for the southern hemisphere), the equinoxes represent that moment that’s exactly in between: where both hemispheres receive sunlight in equal amounts. We typically talk about the equinox occurring on a specific day, but it’s actually a particular instant in time, occurring in 2020 at 11:50 PM ET (8:50 PM PT) on March 19.

Each year, even as the Earth orbits on its axis and revolves around the Sun, our planet returns to the same relative position and orientation in our orbit. In an ideal world, this would line up exactly with the calendar we keep. But there aren’t exactly an even number of days in the year; according to the best math we have, there are 365.242189 days in a year. In order to keep time as accurately as possible yet still have a whole number of days in each year, we’ve adopted the Gregorian Calendar and its system of Leap Years.

The presence or absence of a February 29 on the calendar determines with great significance whether… [+] the equinox shifts forwards or backwards in time from the prior year’s equinox. 2020 marks the first year since 1896 where the entire United States experiences a March 19 equinox.

This year, 2020, is a Leap Year, as all of you likely remember. In order to keep our terrestrial calendar in line with the Earth’s orbit, our Leap Years obey the following rules:

The speed at which planets revolve around the Sun is dependent on their distance from the Sun.… [+] However, the time to complete one complete orbit is not exactly an integer number of days, and so our calendar shifts with respect to the true celestial calendar depending on the number of days we place in any given year.

But getting something precisely right on average doesn’t mean it’s going to be exactly the same year after year or century after century. In 2019, for example, the March equinox occurred in the United States on March 20, at 5:58 PM ET (2:58 PM PT): some 18 hours later than it’s occurring in 2020. The reason it’s so much earlier this year as compared to last year is because of the insertion of Leap Day this past February 29th.

And yet, those of us who remember growing up and living a substantial portion of our lives in the 1900s quite accurately remember that the 20th century never had a March equinox on the 19th. This, too, is true. In fact, the last year that saw a March 19 equinox, or any equinox as early as 2020 will experience, was 1896.

Think about the significance of that year: 1896. In terms of a calendar, 1896 was the last Leap Year in a string of 24 consecutive every-four-years Leap Years, from 1804 to 1896, inclusive. Remember, with 365.242189 days required to account for a full year, approximating that by having a Leap Year every four years (which is an average of 365.25 days-per-year) actually puts us a little bit ahead. Each time we make that approximation ⁠— that 1-in-4 years are a Leap Year ⁠— we wind up keeping time “too fast” by about 45 minutes every four years.

Every year, the time at which the equinox occurs shifts by nearly six hours over the previous year,… [+] except during a leap year, where it jumps in the other direction by approximately 18 hours. The slow migration of the various ‘lines’ correspond to four year intervals, with the discontinuities accounted for by non-Leap centuries.

Compared to 1800, therefore, the 1896 calendar year saw an equinox that was approximately 18 hours earlier than the 1800 equinox. And all of this would have continued to get worse all through the 20th century if we had made 1900 a Leap Year as well. But that’s the huge advantage of the Gregorian Calendar over the Julian Calendar: years that end in “hundred” are only Leap Years if they’re divisible by 400.

1900, therefore, wasn’t a Leap Year. And instead of racing ahead on our calendar by another 45 minutes from 1896 to 1900, we instead let the calendar “catch up” by a full 23 hours and 15 minutes by not having a Leap Year. That one difference ⁠— between having a Leap Year in a turn-of-the-century year versus not ⁠— explains why the equinoxes were always on March 20 or 21 in the 1900s, whereas they frequently occurred on the 19th towards the end of the 1800s.

This unique fisheye timelapse image of the Sun shows its path through the sky on the Summer Solstice… [+] (top), Winter Solstice (bottom), and equinox (middle) days. Although the path of the equinox Sun doesn’t vary from year to year, the date/time on which that path occurs will vary significantly over time.

In other words, as long as you know when the equinox happened the last year, you can know when the next year’s equinox will be by following two rules.

When we do the math, we can determine what types of changes this causes in the equinoxes over long periods of time.

This alternative view of when equinoxes occur clearly show the four year periodicity coincident with… [+] Leap Years, as well as the slow migration of the equinoxes that cause our equinox dates/times to drift, followed by non-Leap centuries correcting for that.

It means that the latest-in-the-year equinoxes always occur when these three conditions line up:

Similarly, that means the earliest equinoxes occur on Leap Years that are towards the end of centuries, particularly in centuries where the turn-of-the-century was also a Leap Year. As the 21st century continues to progress, we’ll see that every 4 years, on average, the equinox will occur 45 minutes earlier than 4 years prior. By the year 2096, we’ll have the earliest equinox for another 400 years: March 19 at 10:04 AM ET (7:04 AM PT).

When the sun rises on March 19, 2096, it will cause Earth to experience the earliest equinox in the… [+] history of the Gregorian Calendar.

But all of that will change when the year 2100 arrives, because that year won’t be a Leap Year. From 2097 through 2103, the equinox will get pushed forward by 5 hours and 49 minutes each year, cumulatively. In 2103, in fact, the March equinox will once again occur on March 21 over parts of the United States: something that won’t occur in the United States throughout the entire 21st century.

The fact that 2100 isn’t a Leap Year pushes the equinox later in the calendar, something that will occur again in 2200 and still again in 2300. This means that the equinox of 2303 will be the latest one of the next 400 years: where it will actually occur in the afternoon of March 21 in New York. But right now, we’re living in an era where the equinoxes are not only the earliest they’ve been in recent memory, but they continue to get earlier with every 4 years that passes, with Leap Years marking the earliest equinoxes of all.

The Earth always receives sunlight on 50% of its surface, but days and nights are only of equal… [+] length everywhere on our world during the equinox, when our rotational axis is tipped perpendicular to the orbital plane.

This year, 2020, marks the first year since 1896 where every United States timezone will experience the equinox on March 19. This will get more severe every 4 years, culminating in an equinox so early in 2096 that even Europe, Africa, and much of Asia will have a March 19 equinox. But this is just a natural part of the cycles of our calendar and how we keep time.

The equinox is migrating exactly as anticipated, and by the 2050s we’ll start experiencing equinoxes even earlier than anything seen in the 19th century as well. But all of that will change again once the calendar ticks past 2100. Although few of us will be around to witness it, March equinoxes in the early 2100s will always fall on March 20 or 21, and never on the 19th, not even on a Leap Year, not for many decades. Enjoy the earliest equinox of your lifetime this year, but come back four years from now and every four years after that, where we’ll keep breaking that record until the century’s end.