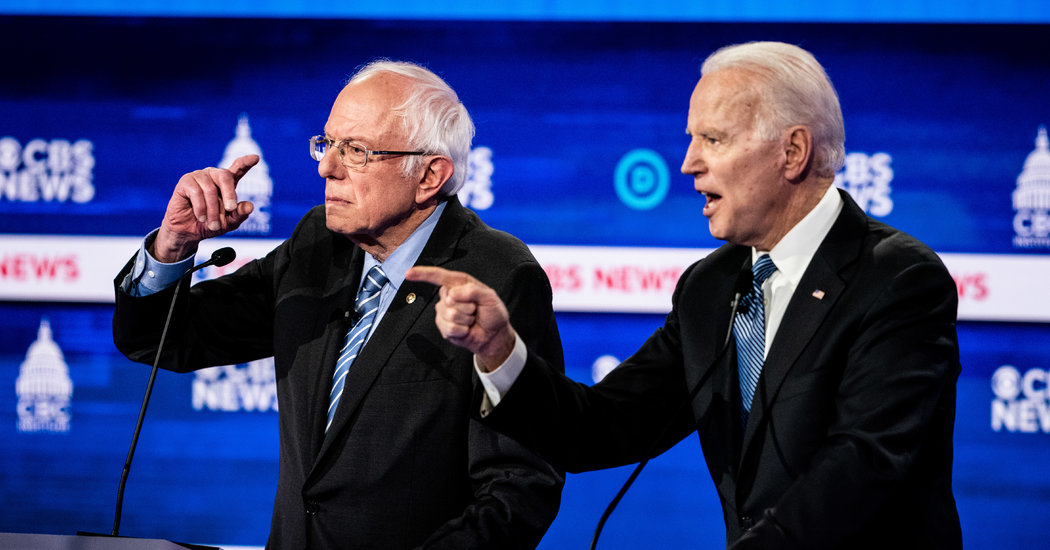 For the first time in the long Democratic primary campaign, Senator Bernie Sanders of Vermont and former Vice President Joseph R. Biden Jr. will meet in a one-on-one debate, facing off Sunday night as Mr. Sanders fights for the future of his candidacy against a rival who has taken a commanding position in the race.

But that isn’t why this debate is different from most others in modern politics.

Both men will be auditioning for the presidency amid an unfolding national emergency over the coronavirus; the last candidates to debate in such urgent circumstances were Barack Obama and John McCain during the 2008 financial crisis. Mr. Sanders will be under added pressure to show why he is still running, at a time when people are worried about far more than presidential politics, while Mr. Biden — often uneven in these debate settings — must navigate far more speaking time as he tries to appear capable of uniting the country and leading it through a crisis.

Rarely has a debate been so shaped by palpable anxiety: The event has been relocated from a Phoenix theater to a Washington, D.C., television studio to limit any unnecessary travel. There will be no live audience and no spin room. One moderator who had potentially been exposed to the virus has bowed out to avoid spreading it.

Debates are often unpredictable, but it is especially hard to game out how this debate featuring a moderate standard-bearer and a liberal challenger will unfold and how people will process it. Hundreds of thousands of viewers, if not millions, will have been personally affected by Sunday, as public gathering spaces are shuttered, schools are closed and on Thursday the stock market plunged by the largest percentage in decades (it snapped back upward on Friday).

“It is going to be a different kind of debate,” Senator Chris Coons of Delaware, an early ally and surrogate for Mr. Biden, said with more than a little understatement.

The extraordinary situation offers an unusual challenge and opportunity. It will provide a national platform and audience for Mr. Biden and Mr. Sanders to preview their own brands of presidential leadership, especially in contrast to that of President Trump, who had spent weeks downplaying the threat that the coronavirus presented.

“You have to throw the entire playbook out the window and focus on what people care about because the agenda has shifted dramatically since they were last onstage together,” said Jared Leopold, a Democratic communications strategist who worked for Gov. Jay Inslee of Washington during his 2020 presidential bid. “It’s like you were preparing to pitch in the World Series and suddenly you found yourself at bat at a key moment. The dynamics have totally shifted.”

Stephanie Cutter, a Democratic strategist who worked on the Obama campaigns, said moments like this are when “voters want to see leaders, not politicians,” warning against anything that would look like “petty politics.”

“This is a time for leadership and demonstrating that you have the judgment and vision to fix the incompetence that we’re seeing out of the White House,” Ms. Cutter said. “That is job No. 1 in this debate.”

Then there are less consequential questions: Will Mr. Biden, 77, and Mr. Sanders, 78, shake hands? And in a new moment of “social distancing” should these two septuagenarian men who are in an at-risk age group make a gesture of doing something else entirely — like an elbow bump?

The state of the race itself has been fundamentally upended since the last debate, too.

Back then — less than three weeks ago — Mr. Sanders had won the most votes in three consecutive contests and was threatening to seize control of the nominating contest. Now, Mr. Biden has romped through two straight weeks of sizable victories, so much so that Mr. Sanders’s campaign is facing what experts see as a nearly insurmountable delegate climb.

Mr. Sanders now trails Mr. Biden by more than 150 delegates after losing four states last Tuesday and 10 the week before. His defeats were so thorough in Mississippi, Missouri and Michigan (a state Mr. Sanders won four years ago) that he trailed in every county. The states that vote next week — Ohio, Florida, Illinois and Arizona — are challenging for Mr. Sanders, as well.

That difficult math might typically suggest an aggressive new posture for Mr. Sanders, who needs a real restructuring of the race to be successful. But his speech after last week’s disappointing elections — “we are losing the debate over electability” — was widely interpreted as an effort at de-escalation, as he pressed Mr. Biden to win over his liberal supporters on issues ranging from the environment to student debt, repeatedly asking “Joe, what are you going to do?”

In his own speech on Tuesday night, Mr. Biden offered an olive branch to Mr. Sanders and his supporters, thanking them for their contributions to the contest.

Mr. Coons expected more of that approach on Sunday. “I suspect that we will see Joe say he wants to work with Bernie on some of his policy proposals,” Mr. Coons said. But, he said, “if Bernie insists on simply picking up tools and swinging at Joe the whole time, I think it will be harder to do that.”

“They have a shared fundamental goal of preventing Donald Trump’s election and the longer that Bernie Sanders spends attacking Joe Biden the more likely he is to undermine the strength of his candidacy against Donald Trump in the fall,” Mr. Coons added.

Still, for Mr. Sanders, the rapid spread of the coronavirus and the predicted shortcomings of America’s medical system are shining a spotlight on his signature issue: a universal and government-run health care system.

“It’s obviously a health care crisis and so Bernie’s longstanding support for providing affordable health care for everyone through ‘Medicare for all’ is particularly relevant today,” said Ben Tulchin, a pollster for Mr. Sanders. “And he is consistently seen as the most trusted candidate on health care.”

Mr. Tulchin said the coronavirus’s economic fallout would shape the debate to Mr. Sanders’s benefit, too.

“Bernie has a lot of credibility talking about economic issues especially for those being left behind in today’s economy and there are soon going to be millions of more people facing financial challenges,” Mr. Tulchin added. “There are millions of workers who don’t have paid sick leave, millions of workers who are living paycheck to paycheck, and if you’re out of work for a few weeks that is potentially catastrophic.”

The two candidates offered a preview of their contrasting approaches to the crisis in a pair of speeches on Thursday.

Standing in front of a row of American flags, in Wilmington, Del., Mr. Biden adopted the scene and serious tone of a statesman, calling for collective action as a country. “The coronavirus does not have a political affiliation,’’ he said. “It will affect Republicans, independents and Democrats alike and will not discriminate based on national origin, race, gender or ZIP code.”

Mr. Sanders, speaking from Burlington, Vt., with the state and American flags positioned in front of “Bernie” signage, warned starkly of casualties that could top World War II, while pivoting to his central message of the urgent need for universal health care.

“Our country is at a severe disadvantage compared to every other major country on Earth because we do not guarantee health care to all people as a right,” Mr. Sanders said.