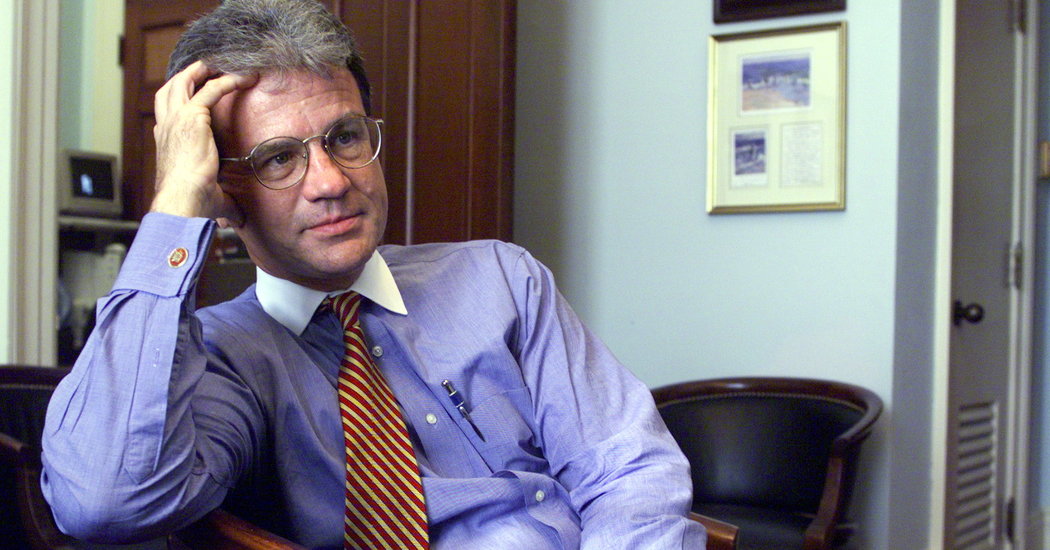 Tom Coburn, an ultraconservative Oklahoma Republican and family physician who in 16 years in Congress crusaded for limited government, using a rule-book technicality to block so many bills that frustrated legislators called him “Dr. No,” died on Saturday in Tulsa. He was 72.

The cause was cancer, said John Hart, his former communications director. Mr. Coburn had said in 2013 that he was being treated for a recurrence of prostate cancer, and in 2014 he announced that he would retire.

Mr. Coburn was an obstetrician who treated some 15,000 patients and delivered 4,000 babies in a maternal and family practice in Muskogee, Okla., before embarking on his political career — three terms in the House of Representatives (1995-2001) and, after a four-year hiatus, two terms in the Senate (2005-15). He retired two years before the end of his second term because of deteriorating health.

A visceral foe of Washington long before such disaffections coalesced into the Tea Party, Mr. Coburn swept into Congress with the class of 1994, when Republicans gained control of the House for the first time in 40 years and installed Newt Gingrich as speaker and his “Contract With America” agenda to shrink government, cut taxes and promote welfare reforms and business activity.

Mr. Coburn soon set about displeasing everyone, including the constituencies most politicians covet: his own party’s activists, donors, leaders and congressional colleagues. He battled with Mr. Gingrich often, charging that he was drifting to the political center and away from his contractual pledges to the nation. He openly vented his disdain for career politicians.

“His contempt for them is genuine, bipartisan and in many cases mutual,” The New York Times reported years later. “He once prescribed a ‘spinal transplant’ for 70 percent of the Senate, and another time said his colleagues had ‘reproductive organs the size of BBs.’”

As if separating himself from the pack, Mr. Coburn continued to deliver babies as a member of the House. (He gave up his obstetric moonlighting only after a dispute with ethics officials when he entered the Senate.) But he won grudging respect as a political maverick and was admired by some colleagues as one of the toughest fiscal and social conservatives of his era.

For the sake of smaller government, he voted against nearly all spending bills, particularly pork-barrel allocations for the pet projects of legislators. He opposed gay rights, same-sex marriage, embryonic stem-cell research and abortions except those to save a woman’s life. He denied that global warming was real. He favored term limits for elected officials and pledged to abide by them himself.

In the House, he supported gun rights and favored the death penalty, even for doctors who performed abortions. He also wrote laws aimed at protecting infants from AIDS and expanding medical care for the elderly. He helped reform welfare and other federal entitlement programs, and led workshops for young staff members on sexually transmitted H.I.V. infections.

He caused a stir in 1997 when he protested NBC’s decision to televise, in prime time and without editing, “Schindler’s List,” Steven Spielberg’s Oscar-winning Holocaust film. He called it television’s “all-time low, with full-frontal nudity, violence and profanity,” adding, “I cringe when I realize that there were children all across this nation watching this program.”

He was heavily criticized, including by the American Jewish Congress, which said: “This isn’t ‘Melrose Place,’ Mr. Coburn. This is the Holocaust.” He apologized “to all those I have offended,” but insisted that the film should have been aired later in the evening.

Keeping his campaign pledge to serve no more than three consecutive terms in the House, Mr. Coburn did not run for re-election in 2000. He resumed his medical practice, and in 2002 was appointed by President George W. Bush as a co-chairman of his advisory council on H.I.V. and AIDS, giving him a prominent platform as he prepared to run for the Senate.

Mr. Coburn also wrote a book about his experiences in Congress, “Breach of Trust: How Washington Turns Outsiders Into Insiders” (2003, with Mr. Hart). In it, he called “careerism” the central tenet of Congress. “Both parties today,” he wrote, “are ultimately controlled not by ideas, but by the desire to be in control, a posture that creates little motivation for bold change.”

Mr. Coburn continued his conservative fiscal and social voting record, but with far wider public and media attention. He became notorious for using a procedural senatorial privilege, called a hold, with which a single senator could block bills from being voted on by the full Senate.

At first his obstructionist tactics were relatively innocuous. He blocked two 2007 bills honoring the 100th birthday of Rachel Carson and her landmark 1962 book, “Silent Spring,” which documented the environmental effects of pesticides. Mr. Coburn called the book “junk science” and “the catalyst in the deadly worldwide stigmatization against insecticides, especially DDT.”

Later bills blocked by Mr. Coburn included provisions for health care, penalties for child pornography and protections for natural resources. Senate business was dragging to a crawl under the tactical loophole he was exploiting.

In 2008, to expose and embarrass Mr. Coburn, the Senate majority leader, Harry Reid, introduced 35 of the most irresistible-sounding bills together as “omnibus legislation.” It was a benign collection that almost any senator would be ashamed to vote against: a Mothers Act to relieve postpartum depression, a Protect Our Children Act to thwart internet predators, and a shameless measure to commemorate “The Star-Spangled Banner.”

Tom Coburn put a hold on the package, which was mocked as the “Tomnibus” bill. He did not back down. Neither did Senate Democrats.

The struggle lasted two years, but came to a head when he put a hold on a bill to fund the disarming of the Lord’s Resistance Army, a Ugandan terrorist group that had massacred countless civilians and dragooned children into its ranks. After an 11-day round-the-clock protest outside Mr. Coburn’s office by people outraged that funds to suppress terrorists were being held up, he relented and the bill passed.

Re-elected in 2010, he pledged not to seek a third term. He left the Senate in early 2015 after retiring for health reasons, but continued to write and speak against government waste and profligate spending.

Thomas Allen Coburn was born in Casper, Wyo., on March 14, 1948, to Orin Wesley and Anita (Allen) Coburn. In Muskogee, where the family settled, his father was an optician who founded Coburn Optical Industries, which made ophthalmic equipment and eyeglass lenses. The company was sold to Revlon for $57 million in 1975, although the elder Mr. Coburn continued as president of the subsidiary. Tom Coburn graduated from Central High School in Muskogee in 1966.

In 1968 he married Carolyn Denton, the 1967 Miss Oklahoma. They had three daughters: Callie, Katie and Sarah, the operatic soprano. He is survived by his wife, his daughters and nine grandchildren.

At Oklahoma State University, Mr. Coburn was an honors student and president of the student business council. He graduated in 1970 with a bachelor’s degree in accounting. From 1970 to 1978, he was the manufacturing manager of the ophthalmic division of Coburn Optical Industries in Colonial Heights, Va.

After the family business was sold, he attended medical school at the University of Oklahoma and received his medical degree with honors in 1983. He interned at St. Anthony Hospital in Oklahoma City, had a residency at the University of Arkansas Health Education Center in Fort Smith and returned to Muskogee to open his family and obstetrics practice.

He was a deacon of the Southern Baptist Church and participated in medical missions to Haiti in 1985 and Iraq in 1992.

His decision to run for Congress in 1994 was a long shot. He narrowly won, becoming the first Republican to represent Oklahoma’s Second Congressional District in 73 years.

Mr. Coburn had homes in Muskogee and Tulsa. Besides “Breach of Trust,” he wrote two books: “The Debt Bomb: A Bold Plan to Stop Washington From Bankrupting America” (2012, with Mr. Hart) and “Smashing the DC Monopoly: Using Article V to Restore Freedom and Stop Runaway Government” (2017), about a plan for the states to amend the United States Constitution.

While he never drifted from his conservative convictions, Mr. Coburn forged a friendship in Washington that was as unlikely as it was enduring. Arriving in the Senate together in 2005, he and Barack Obama quickly bonded.

Shortly before he retired, Mr. Coburn said of Mr. Obama: “I think he’s a neat man. You don’t have to be the same to be friends. Matter of fact, the interesting friendships are the ones that are divergent.”