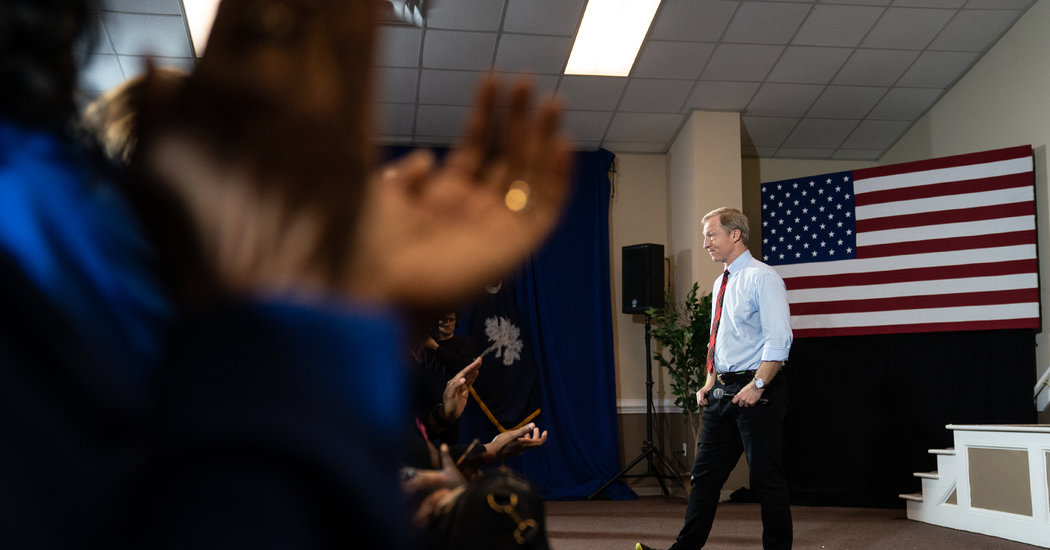 HARTSVILLE, S.C. — While leading Democratic presidential candidates make a last-minute push in Iowa and Michael R. Bloomberg looks ahead to Super Tuesday, Tom Steyer has his eye on a different prize: South Carolina. And he’s spending millions of dollars to court the black voters who are crucial to success in the state.

Mr. Steyer, the hedge-fund billionaire from California, is tapping into his vast wealth to lavish money on black businesses, hire dozens of African-American staff members and spend generously with black-owned news organizations.

It’s part of a campaign buying blitz that has put South Carolina awash in Steyer money as he also blankets the state with millions in advertisements and mailings, making him nearly omnipresent in the state while other campaigns have barely begun to invest financially.

For some of the Democratic electorate, and certainly his rivals, Mr. Steyer’s ability to use his fortune to drive his campaign and carpet-bomb a region with ads is a distortion of the political system. But in South Carolina, at least, the strategy has seemingly paid off as he attempts to chisel into support for former Vice President Joseph R. Biden Jr., who is the clear front-runner in polls here.

A Fox News survey this month showed Mr. Steyer in a surprisingly strong position in South Carolina — in second place with 15 percent of the vote. Earlier polls by YouGov and the University of North Florida had hinted at Mr. Steyer’s growing strength.

“He’s inundated the airwaves,” said Gibbs Knotts, a professor at the College of Charleston and co-author of a book, “First in the South,” on the history and importance of South Carolina’s early primary, which falls this year on Feb. 29. “You almost can’t turn on a television show or be on the internet and not see his commercials.”

Since he announced his bid in July, Mr. Steyer has spent roughly $14 million on local broadcast ads in the state; that’s about 70 percent of the total spent on political ads in South Carolina by all candidates, Democratic and Republican, according to Advertising Analytics, an ad tracking firm.

On Facebook, Mr. Steyer has been aggressively ramping up his advertising over the past month. He began December spending less than $40,000 per week on the site. By mid-January, he was spending close to $200,000 per week, earning him a market dominance similar to the one he has on TV. He has close to 80 percent of the Facebook political ads reaching voters in South Carolina.

Mr. Steyer’s dominance extends to an old-fashioned messaging system as well: the postal system. Residents in South Carolina have reported receiving mailers from Mr. Steyer multiple times in a single week. Though his fourth-quarter campaign finance report will not be released for a few weeks, Mr. Steyers led the field in investing in direct-mail operations nationally in the third quarter, spending $3.7 million through the end of September, according to federal campaign finance records.

The sudden rise in polls has given Mr. Steyer confidence in his campaign’s path, and he has began wooing party leaders in private, making the case that he could emerge as a consensus leader if there is a split decision in Iowa, New Hampshire and Nevada results.

But some experts question the wisdom of Mr. Steyer’s spending here. “If I’m running that campaign, I’m thinking it’s great that after all these tens of millions of dollars we’re finally starting to show some movement,” said Lachlan McIntosh, a Charleston-based Democratic consultant. “But my goodness, it is worth it?”

Others wonder whether the money could be put to better use. “Tom has been out there for a while beating his drum,” said Jerald Sanders, the mayor of Swansea, S.C., a small town near the state’s capital, Columbia. “But most of these folk think the money he is using could go to setting up some organizations and nonprofits.”

In campaign appearances, Mr. Steyer points to the commitment he and his wife, Kat Taylor, made 10 years ago, to give away at least half of their money to philanthropic causes. Ms. Taylor is the chief executive and founder of a community bank in Oakland, Calif., that provides credit to low-income communities and nonprofit organizations.

The advertising is the most important element of Mr. Steyer’s four-pronged approach for building support here, one that was prescribed by several black leaders in the state who met with him last year, according to Johnnie Cordero, the chairman of the state’s Democratic black caucus.

But the Steyer campaign is going beyond messaging. With black voters comprising about 60 percent of the Democratic electorate, the group advised Mr. Steyer to hire local African-American staff members and to use black businesses.

Mr. Steyer’s South Carolina campaign employs 93 people — more than any other candidate — with many of the workers drawn from local communities. And according to a candidate tracker, Mr. Steyer has appeared at 35 events in the state, 12 more than Mr. Biden. (Mr. Steyer’s campaign counts 48 events by its candidate.)

“You have to put your money where your mouth is,” Mr. Cordero said, complaining that other candidates have come into the state to kiss babies, shake hands and spend millions of dollars, but then ask black people to volunteer. “He supports black businesses. He’s holding his events at black venues wherever possible.”

Mr. Cordero, who has endorsed Mr. Steyer and was seated with him during a Martin Luther King Day breakfast, said he gave other candidates the same advice. “We talked to other candidates and told them the formula,” he said. “Tom Steyer is the one who did it.”

In a statement Thursday, Mr. Steyer’s campaign said it was “proud to support local and minority owned businesses when we campaign throughout South Carolina and the other primary states. A critical part of running a grass-roots campaign is engaging local communities and small businesses.”

Mr. Steyer’s campaign event last Saturday in Hartsville, a northeastern South Carolina town of 7,500, did just that. He hired the minority-owned Bailey’s Catering to provide food for about 100 people.

The company’s owner, Annie Bailey, is well known locally because she cooked for Stedman Graham, Oprah Winfrey’s longtime partner, when he appeared here.

“They were very specific that they wanted sweet tea, lemonade and water,” Ms. Bailey said as her crew cleaned up after Mr. Steyer’s appearance at the Jerusalem Baptist Church.

Ms. Bailey said she catered the event for $1,250, a discounted rate, because she regarded the campaign as a “good cause.” And she has become a supporter of Mr. Steyer and is spreading the word to her friends, she said.

“I think he has great ideas,” Ms. Bailey said.

The Steyer campaign has also committed to spending about $150,000 on advertising in the black-owned media.

The ad buy seems to have earned Mr. Steyer some good will, or at least positive media attention. One of the top items last week in The Minority Eye, a black-owned news site in Columbia, trumpeted Mr. Steyer’s ad spending with a headline, “Steyer’s investment in black-owned media shows a sincere commitment to black voters.”

The Steyer campaign then turned the Minority Eye story into a Facebook ad, putting roughly $2,000 behind the ad and targeting it almost exclusively to thousands in South Carolina. (The publisher of The Minority Eye, Michael Bailey, is also the official spokesman for Mr. Cordero’s group, the Democratic black caucus. Mr. Bailey is not related to Annie Bailey.)

Though Mr. Steyer’s ads predominantly address issues core to his campaign, like climate change and instituting term limits that would prevent members of Congress from serving more than 12 years, some of the ones in South Carolina specifically feature topics of concern to black voters. One television ad features Harold Mitchell, a former state representative and leader in the black community, who boasted of Mr. Steyer’s stated commitment to cleaning up pollution in black neighborhoods affected by environmental hazards.

Mr. Steyer’s formula is working on David Howell, father of Rolando Howell, a standout former basketball player for the University of South Carolina Gamecocks who died at age 34 in 2016 after being rushed to the hospital with complications of a spinal cord injury.

Mr. Howell, who lives just south of Columbia, believes his son might still be alive if there were a hospital on his side of the city. He told Mr. Steyer of his concerns during a campaign event in December at Zion Mill Creek Baptist Church.

Mr. Steyer’s campaign responded by producing a digital ad featuring Mr. Howell and his son’s story. “Nobody else came and he made me feel good that he’s listening to us,” said Mr. Howell, who said he was switching his vote to Mr. Steyer from Mr. Biden.

Mr. Steyer’s appearance at Allen University, a historically black school in Columbia, inspired yet another digital ad, a gauzy and upbeat production aimed at black women.

The event, titled “Ladies First,” featured the Grammy-winning hip-hop artist MC Lyte, one of the high-profile black women participating in a panel discussion with Mr. Steyer, which filled the university’s Chappelle Auditorium in December.

Ms. Lyte could not be reached for comment. The panel’s moderator, Feminista Jones, a Philadelphia-based author and activist, said she had not endorsed a candidate but participated in the event because it was a way of bringing black women together to hear their points of view.

Ms. Jones said she was paid for her appearance, which was booked through a speakers bureau.

Mr. Steyer also used Allen University as a place to announce his plan for historically black colleges and universities, which involves a $125 billion investment over 10 years, and began running Facebook ads only in South Carolina about that plan.

It is more money than any other candidate has proposed.