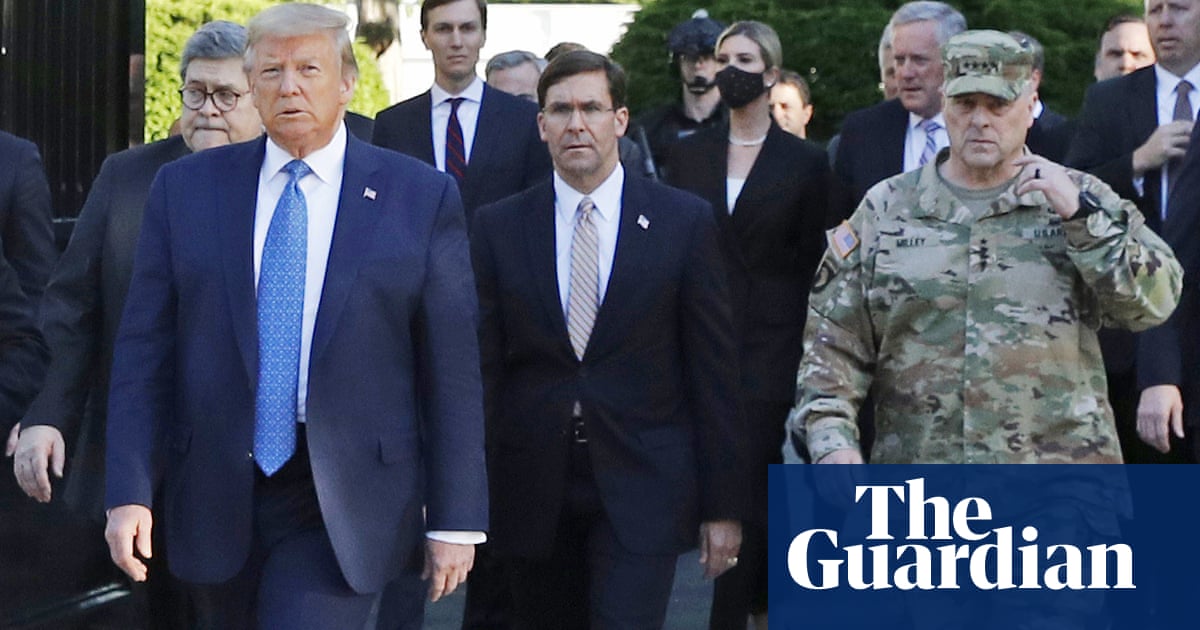 America’s most senior military officer, Gen Mark Milley, chairman of the joint chiefs of staff, has publicly apologized for participating in Donald Trump’s photo-op at a famous church in Washington last week, in another sign of tension between the White House and the Pentagon.

The event took place moments after troops and police cleared a path for the president and his entourage to walk the short distance to the nearby St John’s church, also known as the Church of the Presidents, by violently ousting peaceful protesters chanting and singing amid ongoing nationwide demonstrations in the aftermath of the police killing of George Floyd.

“I should not have been there,” Milley told the National Defense University in a pre-recorded video commencement address.

“My presence in that moment and in that environment created a perception of the military involved in domestic politics.”

Mark Milley, Chairman of the Joint Chiefs of Staff, on his participation in Trump’s bible photo op/tear gassing: “I should not have been there.” He also says, “As a commissioned uniformed officer, it was a mistake that I have learned from.” pic.twitter.com/2e3KZA6HcH

Milley and defense secretary Mark Esper were widely criticized for participating in the photo-op, with many former defense officials saying the two were helping Trump’s efforts to politicize the military.

“As senior leaders, everything you do will be closely watched, and I am not immune,” Milley said.

“As many of you saw the result of the photograph of me at Lafayette Square last week, that sparked a national debate about the role of the military in civil society. I should not have been there,” Milley continued.

“My presence in that moment and in that environment created a perception of the military involved in domestic politics. As a commissioned uniformed officer, it was a mistake that I have learned from, and I sincerely hope we all can learn from it.”

Milley and Esper were part of a large entourage that walked with Trump from the White House to the church, moments after a press conference in which the president had threatened the exceptional move of unilaterally sending in US troops to put down unrest in cities around the country if their mayors or governors were not able quickly to restore law and order.

If states want to resort to using troops to quell protests, they use their local national guard, and the president is constitutionally expected to refrain from using federal military in domestic law enforcement unless requested by a state governor. However, the president has jurisdiction in the District of Columbia, which is not a state and has a mayor but no governor.

Esper and Milley have said they thought they were merely going to inspect troops who were ranged outside the White House in Lafayette Square, or look at damage to the church located there.

But before the temporary curfew imposed in Washington DC began, military police and law enforcement suddenly used teargas, rubber bullets and flash-bangs to chase away demonstrators crowded into Lafayette Square, in front of the church.

TV footage showed people running, falling and scrambling for safety as officers removed them by force. One woman was carried away by fellow protesters because she was injured and unable to walk. Military vehicles rolled out on Pennsylvania Avenue.

The square having been cleared, reportedly at the behest of the attorney general, Bill Barr, Trump, Milley, Esper and an entourage walked the few yards from the White House to the church, where Trump posed with a Bible.

“I am your president of law and order,” Trump said at the time. “I am mobilising all available federal resources, civilian and military, to stop the rioting and looting, to end the destruction and arson.”

Even clergy handing out hand sanitizer to ward off coronavirus and water to protesters were teargassed.

Milley has since “agonized” about having participated, and expressed anger with the president about the issue, according to the New York Times.

Trump’s former defense secretary, James Mattis, had swiftly and roundly slammed the president for his belligerent talk and handling of the swelling protests against police brutality and racism, while Esper also broke ranks over Trump’s actions to direct US military to gather on the outskirts of the capital as a show of force and apparently poised to intervene if protests became too volatile.

Milley’s apology also comes amid another standoff between the White House and the Pentagon over the potential renaming of military bases named after Confederate generals.

Milley and Esper signaled earlier this week that they were open to a conversation on renaming the bases, after years of critics complaining the bases’ names celebrated the Confederacy’s efforts to preserve slavery, which Trump has flatly refused to consider.