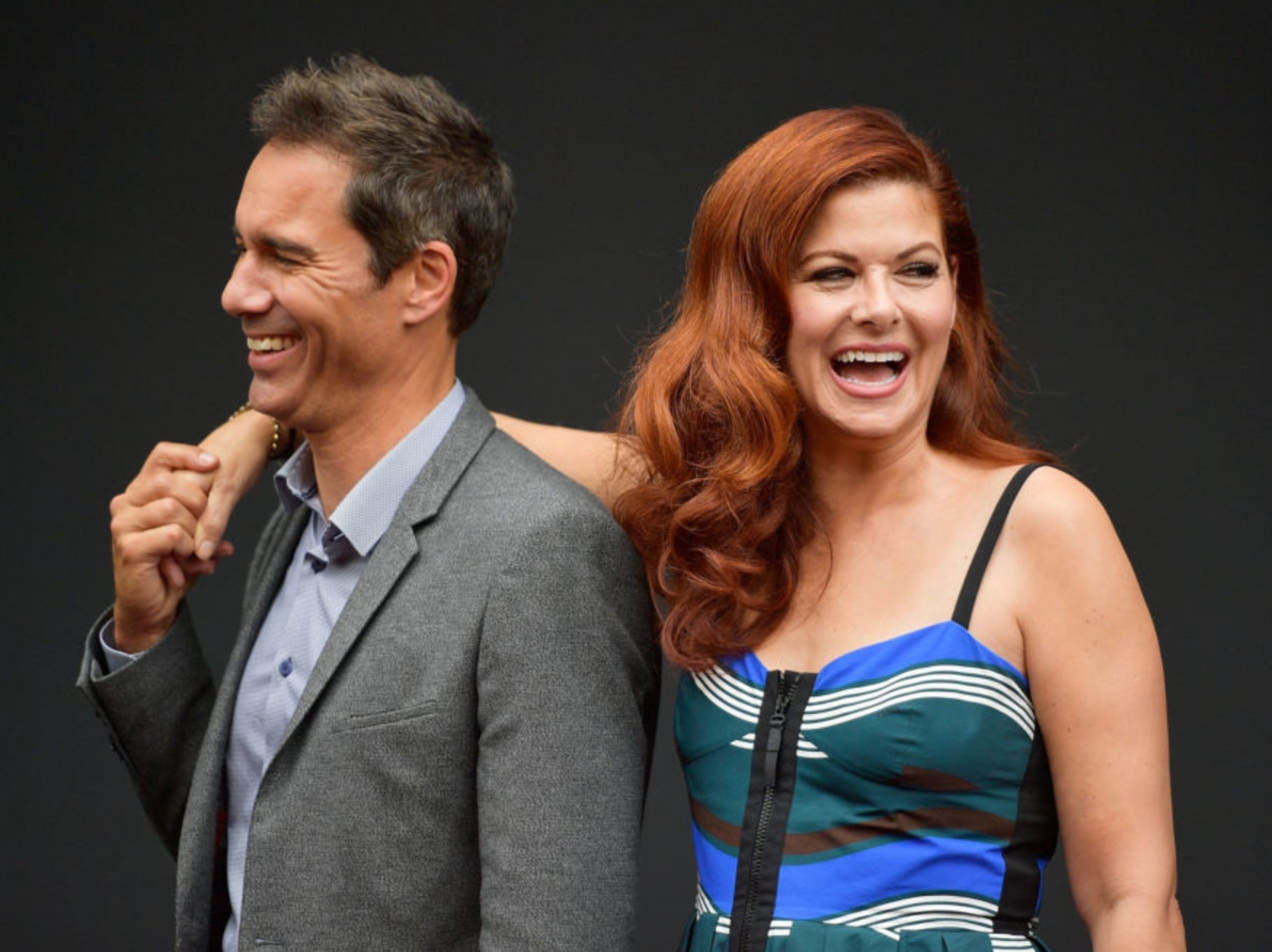 Greetings from Vancouver, where this evening we’ll be hosting the pre-cruise reception for the sold-out Second Annual Mark Steyn Cruise, sailing tomorrow morn for Alaska with a full schedule of Mark Steyn Shows including among others hockey-stick slayers Stephen McIntyre and Ross McKitrick and culture disrupters Ann McElhinney and Phelim McAleer. That’s four Macs, which is the maximum allowed by the British Columbia fire code.

Meanwhile, a few post-Labor Day thoughts on the passing scene:

~”Will & Grace” was a hugely successful sitcom around the turn of the century, and apparently is still around today, although much diminished: its recent run on NBC attracted lower ratings than, say, a certain Canadian guest-host’s brief reign as last month’s King of Cable. Nevertheless, one must respect a hit, which the weekly capers of a gay lawyer and his non-gay interior-designer lady friend, undoubtedly were.

These days, alas, “Will & Grace” is all will and little grace, both of its stars leading the way in Hollywood’s ever more naked enforcement of what is, if not yet a one-party state, certainly a one-party culture. The other day both of its eponymous stars, Eric McCormack and Debra Messing, demanded that The Hollywood Reporter release the names of all those attending a Beverly Hills fundraiser for Trump so that, in McCormack’s words, “the rest of us can be clear about who we don’t wanna work with“. Hollywood stars have principles, you know: it’s one thing to work with known sex predators, but quite another to work with a fellow who votes for the other party in a two-party system.

After announcing their plans for a new blacklist, Debra Messing (whom I enjoyed in the flop show “Smash”) went further and agreed with an Alabama pastor that black Trump supporters are mentally ill. Personally, I am reluctant to pronounce on mental-health issues in a world where The New York Times will report straight-faced the claims of distinguished scientists to have “ridden on the back of an invisible bear conjured by an osha root” and American Airlines will let you board with a horse as your emotional support animal. By contrast, Miss Messing has no qualms about a wealthy white woman rebuking blacks for declining to vote as she instructs. Perhaps, for her next intervention, she’ll be recommending mass institutionalization with compulsory sterilization.

Whatever her psychiatric skills with respect to ethnic minorities, I wonder if, in political terms, Debra and her chums are not making the same mistake as last time round. Me live-blogging on Election Night three years ago:

11.40pm Eastern: Trump has just breached Hillary’s ‘blue wall’ and won Wisconsin. Democrats are reported to be “subdued” over at the Clinton “party” in New York, but the court eunuchs at US Weekly are still drooling:

Katy Perry was there! And Amy Schumer! And Lady Gaga!

You need a candidate who connects with people, not with Katy Perry.

If McCormack and Messing seriously wanted to defeat Trump, they’d do the Dems a favor and go to a remote South Pacific atoll for the next fifteen months.

~A year or so back I characterized what’s going on in the Brexit maneuvers in London and the impeachment fevers in Washington as the elites revolting against the masses. On the BBC the other day, I heard a reporter on the scene at one of last weekend’s anti-Boris demonstrations, this one in Leeds. “I have to say it is a very middle class crowd,” she acknowledged glumly. The PA system broke down, which meant that none of the speakers could actually speak.

That would be a problem at many events, but not at an anti-Brexit rally. Nobody has anything much to say: One is there merely to demonstrate that one has the correct attitude, which could be accomplished by waving a baguette or a picture of the house you rented in Tuscany last summer.

In the last French presidential election Emmanuel Macron distilled the preferred attitude brilliantly into the magnificently hollow slogan “En marche!” – which means, literally, “on the march”, or “forward”. As a means of countering the populism of Marine Le Pen with a pseudo-populist flourish of his own, it was ingenious: it gilds the great sucking swampy stasis of conventional opinion with the frisson of bold and decisive movement into the future – and that frisson is all most of the “very middle class crowd” want. M Macron subsequently modified the name of his new party to “La République En Marche!” – The Republic on the March! That exclamation point is inspired – punctuation as a substitute for policy.

For next month’s Canadian election, dauphin-turned-sleazy-corruptocrat Justin Trudeau has hired the usual gazillion-dollar consultants to come up with his own campaign slogan. The result is “Choose Forward” – which is intended to accomplish the same function as M Macron’s: pass off the usual cronyism as something epic and virtuous. It sounds to me more like the sort of thing your GPS says when you switch on the ignition. Even hollow faux-populist shtick is harder than you think.

~As for Brexit, Boris and his opponents are now engaged in a battle for control of the calendar between now and October 31st. Today the Johnson ministry lost its majority in the House of Commons when a “Tory rebel” called Philip Lee crossed the floor and joined the Liberal Democrats. “Tory rebel” broadly translates as “establishment suck-up happy to subvert the will of the people”, but it remains to be seen how many others will be willing to do what Lee did. Boris’ advantage is that the many forces ranged against him in his own party and the opposition are in complete disagreement about what they actually want and even when they know what they want (no Brexit at all) are too slippery to say it. Judging from the polls, the public is beginning to pick up the whiff of evasion and shiftiness.

If the last three years have taught anything, however, it’s that these “rebels” calling for “people’s votes” feel largely immune from the vox populi. For a just about functioning Westminster system, the next few weeks of parliamentary jockeying could prove the most constitutionally testing since the Australian dismissal.

~We had a busy Labor/Labour Day weekend at SteynOnline, starting with the latest edition of our Clubland Q&A, in which I answered a host of questions from Mark Steyn Club members live around the planet, on a slew of subjects from Brexit and Comey to where a Bond villain gets his togs. You can listen to the full show here. Kathy Shaidle’s Saturday movie date celebrated great cinema effects without benefit of CGI, and our audio adaptation of Climate Change: The Facts continued with important insights from James Delingpole, Garth Paltridge and Jo Nova. Speaking of meteorological phenomena, with Hurricane Dorian preparing to make landfall in Florida, I took a less destructive and more musical tour of the Sunshine State. And our holiday observances included a song of back-breaking labor, and a contemplation of a world after work. If you were too busy taking it easy, I hope you’ll want to check out one or three of the foregoing as a new week begins.

Climate Change: The Facts is made possible through the support of The Mark Steyn Club. I am very grateful to all our members around the world, from London, England to London, Ontario to London, Kiribati. We hope to welcome many more of you in the decades ahead. For more information on The Mark Steyn Club, see here – and don’t forget our special Gift Membership.

Oh, and, if you left it too late for tomorrow’s cruise, do give a thought to our Third Annual Steyn Cruise sailing the Med next year and with Michele Bachmann, Conrad Black and Douglas Murray among our shipmates. We’ll be attempting some seaboard versions of The Mark Steyn Show, Tales for Our Time, our Sunday Poem and other favorite features. If you’re minded to give it a go, don’t leave it too late, as the price is more favorable the earlier you book – and, as with this week’s cruise, the cabins go fast.