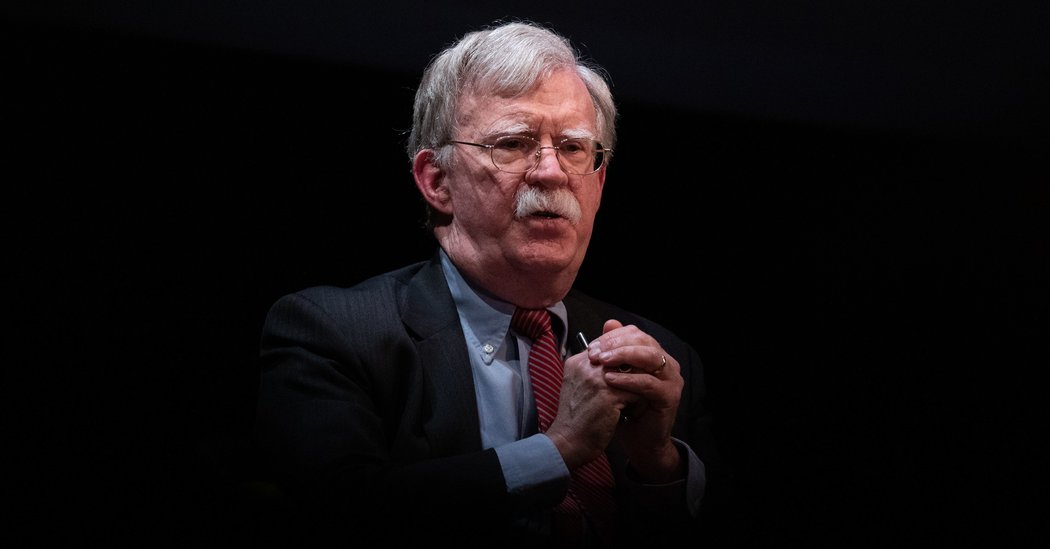 The Trump administration sued the former national security adviser John R. Bolton on Tuesday to stop the publication of his highly anticipated memoir about his time in the White House, saying it contained classified information that would compromise national security if it became public.

The book, “The Room Where It Happened,” is set for release on June 23. Administration officials have repeatedly warned Mr. Bolton against publishing the book.

Mr. Bolton “had negotiated a book deal allegedly worth about $2 million and had drafted a 500-plus-page manuscript rife with classified information, which he proposed to release to the world,” the Justice Department said in a lawsuit against Mr. Bolton filed in federal court in Washington.

Mr. Bolton’s lawyer, Charles Cooper, has said that his client acted in good faith and that the Trump administration is abusing a standard review process to prevent Mr. Bolton from revealing information that is merely embarrassing to President Trump, but not a threat to national security.

On Monday, Mr. Trump accused Mr. Bolton of violating policies related to classified information by moving ahead with the book.

But the book has already been printed and bound and has shipped to warehouses, which could make it more difficult for the administration to stop Mr. Bolton’s account from becoming public.

Mr. Bolton submitted the manuscript to the administration for review in January. At the time, the impeachment inquiry was underway into whether Mr. Trump’s dealings with Ukraine constituted an abuse of power.

Democrats asked Mr. Bolton to testify voluntarily in the House impeachment inquiry, but he declined, and they never sought a subpoena, fearing a protracted court fight. Mr. Bolton offered to testify in the impeachment trial in the Senate, where Republicans control the majority. They declined to call him.

One critical account from the book emerged during the trial, when The New York Times reported that Mr. Bolton, in his manuscript, said that Mr. Trump directly tied military aid to Ukraine to his desire for investigations he sought to undermine a political rival, former Vice President Joseph R. Biden Jr. Mr. Bolton made clear, in a statement released this week, that the book contained other explosive details.

The government’s system for reviewing books and other material by former officials was created to ensure that classified and other sensitive information remained secret. Officials must agree to submit any works to the review process in order to obtain a security clearance.

A group of former national security officials said last year in a lawsuit that the pre-publication review process for books and articles unjustifiably restricted their rights to free speech and due process.

They claimed that the review system, which is governed by several ambiguous policies, gives reviewing officials too much discretionary power over what is published and allows them to quickly clear reviews for former officials who write positively about the government.