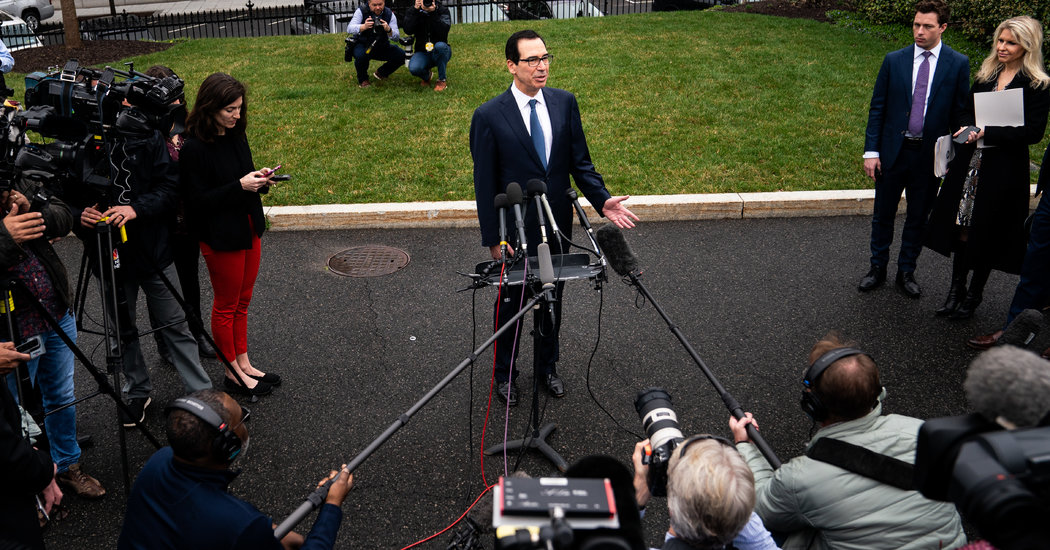 WASHINGTON — The Trump administration is preparing to ask Congress to infuse about $850 billion in additional stimulus to prop up the economy, which is facing a deep downturn as businesses shutter amid the coronavirus pandemic.

Treasury Secretary Steven Mnuchin is expected to pitch Republican senators on the administration’s request for additional fiscal firepower, the centerpiece of which is the payroll tax cut that President Trump has been calling for, according to people familiar with the plans. At a luncheon in the Capitol, Mr. Mnuchin is also expected to face questions from Republicans who are reluctant to embrace a narrower relief package the House passed last week that includes paid leave, unemployment insurance, free coronavirus testing and additional food and health care aid.

Some Republican senators now want to wrap both emergency economic measures into one enormous package, which would give them more negotiating leverage on a final product, according to people involved in the discussions who insisted on anonymity to describe them.

The Trump administration is also supporting a request for $50 billion in economic relief for the airline industry as part of the broader package. The industry’s lobbying group publicly made the request on Monday, asking for grants, loan guarantees and tax relief. The administration is also considering ways to support the cruise ship industry.

Widespread travel restrictions are throttling both industries and are expected to be a major drag on global economic growth. Economists at Capital Economics predicted that tourism worldwide could be cut by 50 percent over the next six weeks, sapping in 0.7 percentage points from the world’s annual gross domestic product.

The proposal is emerging amid a growing sense of urgency among lawmakers to step in with aggressive measures to stanch the economic pain wrought by the pandemic, and mounting anxiety that Congress is running out of time to do so. With public health officials counseling significant measures to slow the spread of coronavirus, and states and cities ordering businesses to close, limitations on travel and other restrictions on movement, it is not clear how long lawmakers will be able to continue gathering in Washington.

Senator Mitch McConnell, Republican of Kentucky and the majority leader, said on Tuesday that senators would not leave the capital before passing “significant and bold new steps, above and beyond what the House has passed, to help our strong nation and our strong underlying economy weather this storm.”

Mr. Trump’s payroll tax cut has drawn opposition from members of both parties, and a growing chorus of Republicans and Democrats are calling instead for cash payments to Americans. Senator Mitt Romney, a Utah Republican, said this week that every adult American should receive a $1,000 check from the government to help boost spending in the economy. A group of Democratic senators, led by Michael Bennet of Colorado, Cory Booker of New Jersey and Sherrod Brown of Ohio, is pushing Congress to send as much as $4,500 to nearly every adult and child in the United States this year, as part of a sustained government income-support program to counter the economic slowdown.

Larry Kudlow, the director of the National Economic Council, laid out the administration’s fiscal stimulus approach on Monday and said that it would amount to about $800 billion, a figure that did not include relief for the airline industry.

Mr. Kudlow and Mr. Mnuchin are also considering an array of other proposals to help individuals and small and midsize businesses, which are facing cash flow problems. One of those ideas, according to people familiar with the discussions, would make it easier for businesses to restructure debt. Other ideas under consideration include providing more funding to hospitals and measures such as loan workouts to help homeowners avoid foreclosure.

The Treasury Department is also expected to outline plans for delaying tax payments without penalties beyond April 15.