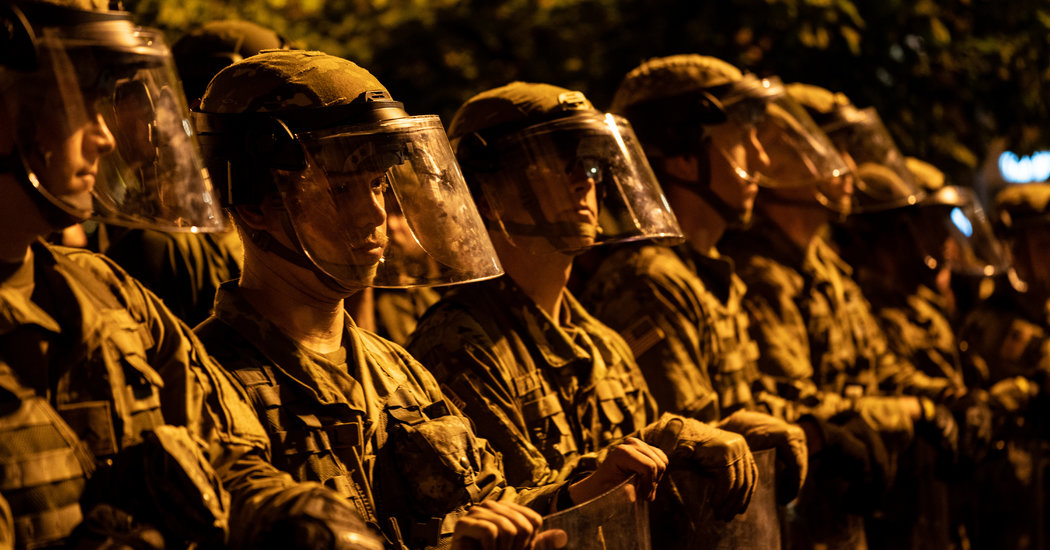 WASHINGTON — For the first three years of President Trump’s time in office, his blunt-force view of the military was confined to threatening American adversaries: “fire and fury” if North Korea challenged American troops. A warning that he would “shoot down and destroy” Iranian forces in the Persian Gulf. Billions spent to rejuvenate a nuclear arsenal he viewed as the ultimate source of American power.

His generals and admirals accepted a commander in chief with what they diplomatically dismissed as a “unique style” — and they welcomed the increase in military spending. His chief diplomats, while embarrassed, saw some utility in trying to force adversaries to the table.

Now, that tolerance has frayed. Mr. Trump’s threat to use the 1807 Insurrection Act to send active-duty troops on American soil against protesters has laid bare the chasm in the national security community that was forming even when he ran for office in 2016.

Back then it was only a limited group of “Never Trumpers” — establishment Republican national security professionals repelled by Mr. Trump’s description of how American power should be wielded around the world — who wrote and spoke of the dangers. He “lacks the character, values and experience” to be president, they wrote, and “would put at risk our country’s national security.”

This week, it was his former defense secretary, a former chairman of the Joint Chiefs of Staff and a range of other retired senior officers who were saying in public what they previously said only in private: that the risk lies in the fact that the president regards the military, which historically has prized its nonpartisan, apolitical role in society, as just another political force to be massed to his advantage.

“There is a thin line between the military’s tolerance for questionable partisan moves over the past three years and the point where these become intolerable for an apolitical military,” said Douglas E. Lute, a retired three-star Army general who coordinated Afghanistan and Pakistan operations on the National Security Council for Presidents George W. Bush and Barack Obama, and later became the American ambassador to NATO. “Relatively minor episodes have accumulated imperceptibly, but we are now at a point of where real damage is being done.”

Mr. Trump’s walk to a church near the White House on Monday, with Defense Secretary Mark T. Esper and the chairman of the Joint Chiefs of Staff, Gen. Mark A. Milley, in tow, may have been the moment everything shifted, Mr. Lute said.

“As that team walked across Lafayette Park with the president,” after the heavy-handed clearing of a peaceful demonstration, he said, “they crossed that line.”

By Thursday afternoon, there was only an uneasy truce, as Mr. Trump agreed to begin sending home from the Washington region some of the 1,600 active-duty troops — ordered from Fort Bragg, N.C., and Fort Drum, N.Y., to quell protests — that defense officials never wanted here in the first place.

But both sides expected the turmoil that began with nationwide demonstrations against the killing of an unarmed black man, George Floyd, in police custody to continue.

One general officer, speaking on the condition of anonymity to avoid punishment from his superiors, said on Thursday that he was hoping to make it through another day without having to cite his constitutional obligations to decline an illegal order. He said he would not be surprised if he faced such a dilemma in the coming weeks.

“Right now, the last thing the country needs — and, frankly, the U.S. military needs — is the appearance of U.S. soldiers carrying out the president’s intent by descending on American citizens,” John R. Allen, a retired four-star Marine general, wrote in Foreign Policy. “This could wreck the high regard Americans have for their military, and much more.” Last year, 73 percent of the public in an annual Gallup poll reported either “a great deal” or “quite a lot” of confidence in the military, making it the highest of the institutions polled.

Military officials’ fears seemed to be borne out during the protests this week in Washington, where by Wednesday night those in uniform facing the peaceful crowd were no longer police officers or Secret Service but National Guard soldiers in camouflage. They stood on 16th Street near the White House in front of two Army transport trucks. Although they were not active-duty military troops, to the protesters they looked like them.

The crowd hurled obscenities and invective. “Fascists!” one person screamed. “Brainwashed!” another yelled.

“We don’t need military artillery to control a city,” Arianna Evans, 23, of Bowie, Md., said in a later interview. “We just don’t, not unless it’s goddamn Yemen.”

Senior Pentagon leaders worry that a militarized and heavy-handed response to the protests, Mr. Trump’s stated wish, will turn the American public against the troops, like what happened in the waning years of the Vietnam War, when National Guard troops in combat fatigues battled antiwar protesters at Kent State. The retired Sgt. Alan Kraus, a combat infantryman in Vietnam in 1970 and 1971, said in a telephone interview that when he returned home from Vietnam, he hung up his uniform and never put it back on, lest he become the target of protesters in the street.

“The purpose of the military is to train soldiers to treat the enemy as inferior human beings or not human beings at all because that makes them easier to kill,” Sergeant Kraus said, adding that it was very hard to “unlearn” all of that training when the military is dealing with civilians.

Both Mr. Esper and General Milley have faced a hail of criticism since their walk across the park with Mr. Trump, and their ties to the president seem to be shifting back to the troops and the Constitution. Mr. Esper, a former Army officer and Persian Gulf war veteran turned Beltway lobbyist for the defense contractor Raytheon, seemed particularly stunned at what he had stumbled into.

When he told NBC News that “I didn’t know where I was going,” he was speaking narrowly about being unaware that he was headed to the church. But his comment seemed to apply more broadly: that he did not understand that he was symbolically embracing the use of American military forces — the National Guard, and not yet active-duty troops — to suppress peaceful protest. He did not help himself by declaring that same day, to governors, that the mission was to “dominate the battle space” in American cities, as if he were discussing an operation in Anbar Province.

For Mr. Trump, who avoided the risk of being drafted into the Vietnam War with a diagnosis of bone spurs, acceptance by the Pentagon has been key — to him and to his base. He celebrated the hiring of Gen. Jim Mattis as his first defense secretary, and then he went looking for other generals: Lt. Gen. Michael T. Flynn, his first national security adviser; Lt. Gen. H.R. McMaster, his second national security adviser; and Gen. John F. Kelly, his second chief of staff.

None of those relationships ended well. But it was Mr. Mattis’s decision to break his long silence, and to declare that Mr. Trump was “the first president in my lifetime who does not try to unite the American people — does not even pretend to try,” that broke the dam.

Mr. Mattis, as a student of the rise and fall of civilizations, added: “We must reject any thinking of our cities as a ‘battle space’ that our uniformed military is called upon to ‘dominate.’” His critique, Senator Lisa Murkowski, Republican of Alaska, said on Thursday, was “true and honest and necessary and overdue,” a rare Republican break with Mr. Trump.

It was not until this week that the consequences of those differing views about the purposes of the military became evident to many Americans. Adm. Mike Mullen, a former chairman of the Joint Chiefs of Staff, denounced the use of the military to support the political acts of a president who had “laid bare his disdain for the rights of peaceful protest in this country.”

“The United States has a long and, to be fair, sometimes troubled history of using the armed forces to enforce domestic laws,” Admiral Mullen wrote in The Atlantic. “The issue for us today is not whether this authority exists, but whether it will be wisely administered.”

For many of these officers, the question was whether Mr. Trump was aware of that history. The Declaration of Independence, several noted, dwelled on the complaints that the King of England “kept among us, in times of peace, standing armies without the consent of our legislatures,” and tried to “render the military independent of and superior to the civil power.”

That is pretty close to what Mr. Trump did on Monday night when he declared that General Milley was “in charge” of what was happening in the streets.

It is not a role, it turns out, that most in his military want.