Trump campaign lawyer Joseph diGenova said Monday that Christopher Krebs — a former federal cybersecurity official fired for doubting President Trump’s voter fraud myths — should be “taken out at dawn and shot,” a shocking insinuation by a member of the president’s legal team. 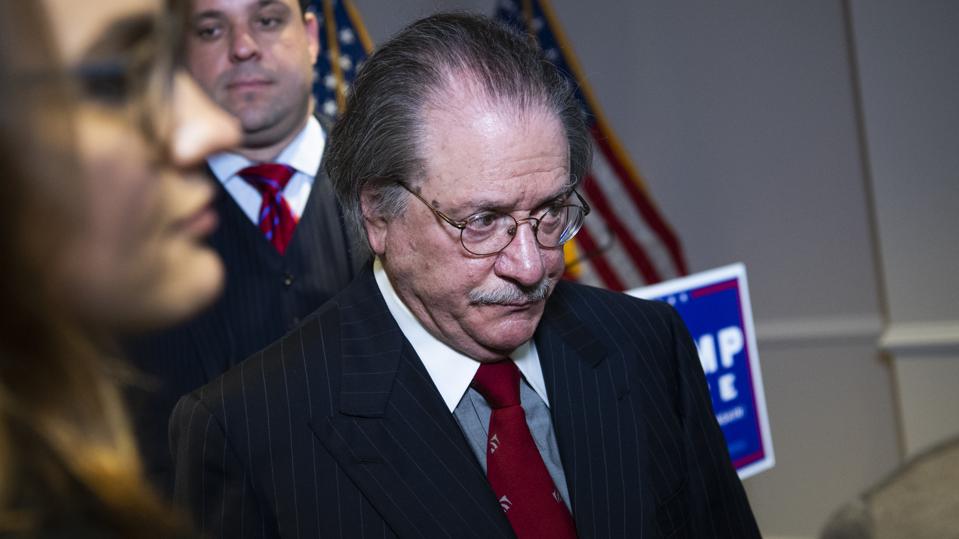 Joseph diGenova, attorney for President Donald Trump, concludes a news conference at the Republican … [+] National Committee on lawsuits regarding the outcome of the 2020 presidential election on Thursday, November 19, 2020.

During a Monday afternoon interview with Howie Carr, a host on far-right cable network Newsmax, diGenova called Krebs a “moron” and suggested he should be killed for saying the 2020 election was secure, conservative website The Bulwark first reported.

Carr chuckled at diGenova’s call for violence and quickly changed the subject, but the talk radio host and enthusiastic Trump booster did not offer any serious pushback.

diGenova spent the rest of the interview offering up fact-free and thoroughly debunked theories about ballot “dumps” and vote-rigging, and he said Republican-controlled state legislatures should overturn President-elect Joe Biden’s wins.

diGenova’s role on the campaign is unclear, but Trump said he was part of a “truly great team” helmed by Rudy Giuliani earlier this month, and diGenova appeared at a wild press conference with Giuliani and other campaign lawyers two weeks ago.

The Trump campaign, diGenova, Carr and Newsmax did not immediately respond to requests for comment.

“That guy is a class-A moron,” diGenova said. “He should be drawn and quartered. Taken out at dawn and shot.”

Krebs, the Trump-appointed ex-head of the Cybersecurity and Infrastructure Security Agency, drew the president’s ire a week after Election Day, when he contradicted Trump and said there was no evidence of widespread electronic vote-rigging. Trump fired Krebs via tweet several days later, falsely claiming the election was riddled with fraud. Krebs reiterated his position on election security and criticized Trump’s attacks on the electoral system during an interview with “60 Minutes” Sunday night, drawing more complaints from the president.

As Trump and his allies promote baseless voter fraud claims and work to reverse the president’s electoral loss, they have lashed out against public officials who publicly disagree with them. In some cases, this heated rhetoric has led to dangerous threats. Georgia Secretary of State Brad Raffensperger said he and his wife received death threats after he refused to portray his state’s election as fraudulent. Plus, employees of Dominion Voting Systems — a voting machine manufacturer falsely accused of election rigging — have been subjected to harassment, the company’s CEO said in a Wall Street Journal op-ed Monday.

Trump Lawyer: DHS Whistleblower Should Be Executed (The Bulwark)

Is a beer shortage on tap? Inflation and supply chain pressures on brewers are intensifying

At anti-war protests in Russia, fears for the drafted as ‘cannon fodder’ and a brutal response by police

Rep. Cori Bush claims the Democratic Party is ‘pro-human rights’ as she promotes the ‘Roe The Vote: Reproductive Freedom Tour’

Majority of likely general election voters do not feel as safe now as they did two years ago: Poll

How protests in Iran over Mahsa Amini’s death ‘forever moved the debate’ over women’s...

News DSMW - September 24, 2022
0
Mahsa Amini's death in police custody sparked a remarkable moment of defiance by Iranian women and men. What does it mean for women's rights in Iran?       ...

Is a beer shortage on tap? Inflation and supply chain pressures on brewers are...

News DSMW - September 24, 2022
0
Beer makers face a combination of issues such as inflation and supply chain shortages, which could lead to some beer shortages and brewery closures.      ...

At anti-war protests in Russia, fears for the drafted as ‘cannon fodder’ and a...

How protests in Iran over Mahsa Amini’s death ‘forever moved the...

Is a beer shortage on tap? Inflation and supply chain pressures...

At anti-war protests in Russia, fears for the drafted as ‘cannon...