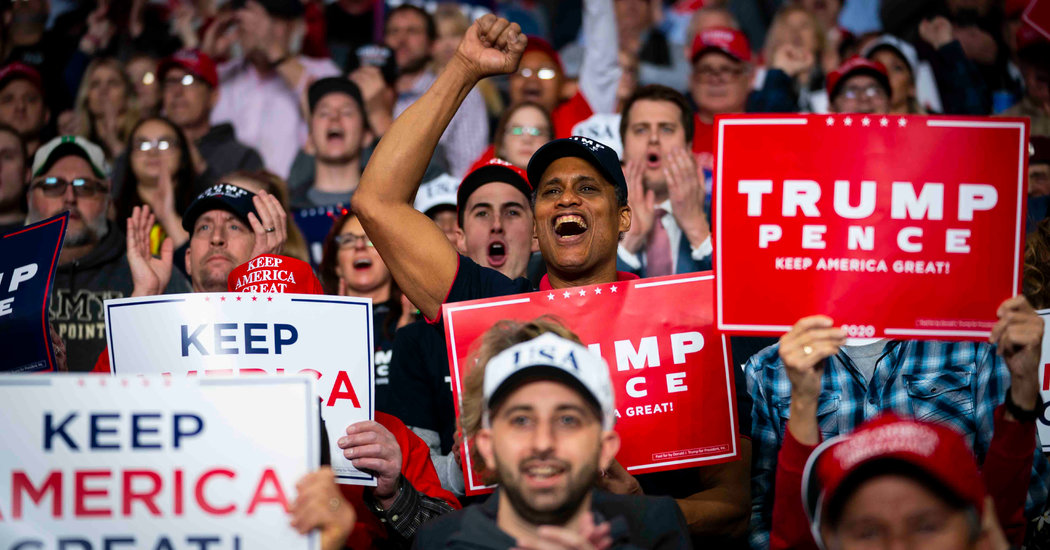 President Trump’s re-election campaign plans to step up its efforts to capitalize on so-called bundlers, supporters who can raise money from friends and business associates in increments up to $2,800, the legal limit for a level of giving that has lagged in the campaign despite a far more sophisticated fund-raising operation than existed in 2016.

The campaign has excelled at small-dollar fund-raising online and at raising six-figure donations from wealthy individuals and corporations for a joint-effort fund-raising arrangement between the Trump campaign and the Republican National Committee.

But there has been little effort to cultivate bundlers who can gather donations from a network of friends and associates that can go directly to a candidate’s campaign.

Mitt Romney and George W. Bush, who ran for president before legal changes allowed joint committees to accept six-figure checks, were prodigious fund-raisers who tended to their bundling networks, ranking them based on the amount they had raised and rewarding the bundlers with names like “Pioneers” and “Ramblers” and giving them special access at retreats and other events.

“In this environment, you should have a program for every segment of the giving community,” said Scott Reed, the campaign manager for Senator Bob Dole’s presidential race in 1996.

Mr. Trump has never appreciated the need for that kind of fund-raising, in part because of his disdain for the type of attention that donors expect in return, advisers have said.

The president’s fund-raising has also benefited from the legal changes in 2014 that allow his political operation to collect six-figure checks by joint committees with the Republican Party — options not available to Republican candidates before Mr. Trump.

But the move to focus more on bundlers comes as Mr. Trump has been increasingly concerned by how much his potential Democratic opponents are spending, particularly Michael R. Bloomberg, the billionaire former New York City mayor who estimates he has spent several hundred million dollars so far on his campaign and is prepared to spend as much as a billion dollars in all.

Mr. Trump’s team has named Kimberly Guilfoyle, the former Fox News personality and girlfriend of the president’s oldest son who has also become a top campaign surrogate, as the national chairwoman for the Trump Victory Finance Committee.

Among her roles will be overseeing the bundler program, which started in May and is set to get more structure, as the campaign heads toward the general election in the fall.

Ms. Guilfoyle said in an interview that there were already new donors who have approached her at events she has done around the country for Mr. Trump who were looking for a point of contact for their giving.

“I want to give them the confidence that their money is going to be put to excellent use,” she said, noting that for many people, “this is the first time that they’ve written a check to a politician.”

Ms. Guilfoyle, the former wife of Gov. Gavin Newsom of California, has an extensive Rolodex in that state and in New York, where donors to previous Republican candidates have been generally cool to Mr. Trump, particularly donors who supported Mr. Romney, the party’s presidential nominee in 2012.

But she said she was also looking to develop new bundlers who could keep building on the campaign’s network.

“Kimberly uniquely unites all elements of the Trump coalition, and it is a reflection of the importance the Trump family places on the fund-raising program,” said Jack Oliver, a bundler for Mr. Bush.

For the past year, the question of how much the president might need such “hard dollar” checks has been a source of debate and, at times, contention among his aides. But there has been little effort to cultivate people who can gather checks in increments of $2,800 at a rapid clip, according to multiple campaign advisers.

Last spring, allies of the president urged Jared Kushner, the president’s son-in-law and senior adviser who is directing Mr. Trump’s campaign from the White House, to do more to cultivate bundlers.

But it became an issue in the rivalry between Mr. Kushner and Ronna McDaniel, the chairwoman of the Republican National Committee.

More recently, the two have reached a détente, according to people close to the campaign. Still, the fund-raising concerns remain, and Mr. Kushner has said he wished some of the top fund-raisers who were rewarded by the president with ambassadorships were still able to raise money, according to two people familiar with his statements.

Mr. Trump’s campaign has repeatedly highlighted its fund-raising numbers, referring to them as “staggering” in a recent news release. The president began the year with close to $200 million in cash on hand between his campaign, the Republican National Committee and other affiliated entities. The groups raised just over a collective $460 million in 2019.

This past week, thanks to joint fund-raising agreements between the campaign, the national committee and 22 state parties, the Trump political operation increased the maximum contribution it could accept to $580,600 per person, giving wealthy donors the ability to park more of their money with the Trump re-election effort.

But some of the money that goes to the committee is restricted to specific uses, while the hard-dollar money can be used for broader purposes, like staff, advertising and field operations.