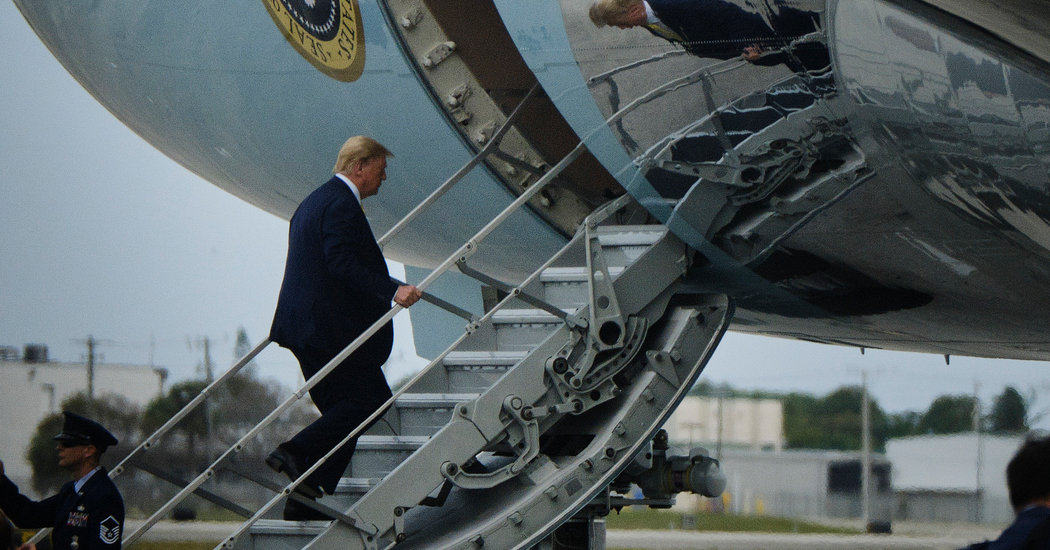 LONGWOOD, Fla. — President Trump’s campaign on Monday called off a “Women for Trump” bus tour featuring his daughter-in-law and other top election surrogates amid ongoing concerns about the coronavirus, two people close to the campaign said, even as the president sought to play down the threat of the outbreak.

The three-day bus tour through the key battleground states of Michigan, Ohio and Pennsylvania was supposed to begin on Monday, featuring Lara Trump, the wife of the president’s son Eric Trump; Kayleigh McEnany, a campaign spokeswoman; and Mercedes Schlapp, a former White House adviser whose husband oversees the Conservative Political Action Conference where an attendee has tested positive for the virus.

But after an advisory was sent out broadly last week, the bus tour was quietly postponed, with notices going out to reporters and attendees who were planning to participate. A campaign spokeswoman cited “scheduling conflicts.” But the two people familiar with the events said the decision came after Ms. Schlapp moved to postpone the tour after the diagnosis of the person who attended the CPAC event.

The delay came as Mr. Trump tried to reassure the public by once again emphasizing that coronavirus remained a relatively low risk for most Americans.

“So last year 37,000 Americans died from the common Flu,” he wrote on Twitter as he arrived in Orlando for a campaign fund-raiser. “It averages between 27,000 and 70,000 per year. Nothing is shut down, life & the economy go on. At this moment there are 546 confirmed cases of CoronaVirus, with 22 deaths. Think about that!”

He appeared to dismiss the impact of the outbreak in fueling Monday’s market meltdown. “Saudi Arabia and Russia are arguing over the price and flow of oil,” he wrote. “That, and the Fake News, is the reason for the market drop!”

He even sought to cast the decline in oil prices in positive terms. “Good for the consumer, gasoline prices coming down!” he wrote.

His advisers expressed more concern. “This is a very serious public health issue,” Alex M. Azar II, the health and human services secretary, told reporters on a conference call on Monday morning. “It’s a serious issue globally. The risk to any individual American generally remains low, but we’ve been very candid that for individuals, in particular the older individuals and in particular those with various elements of medical fragility, to take a special precautions.”

The delayed bus tour was the most visible sign of disruption for the president’s world after days of health experts offering increasingly urgent public commentary about the spread of the coronavirus. The president has said he will continue with the large-scale rallies he relishes, but for the first time in months, none are currently scheduled.

Mr. Trump has asked advisers whether he needs to reduce how many hands he shakes, but he has shown reluctance to change his actual habits — long before the current outbreak, he made a habit of slathering his hands with sanitizer once he finishes with crowds. At a closed-door fund-raiser at Mar-a-Lago on Sunday, he appeared to avoid shaking hands in video posted on social media, elbow bumping one guest instead.

The president’s mood appeared grim Monday morning as the markets plummeted while he left Palm Beach, where he spent the weekend golfing, hosting a birthday party and having dinner with Brazil’s visiting president. He swiftly boarded Air Force One without waiting for news photographers to arrive on the tarmac below the stairs, to take his picture, as he typically does. After landing in Orlando, though, he made a point of shaking hands with Gov. Ron DeSantis and then briefly shaking hands with a crowd of supporters who had gathered to watch his arrival.

Mr. Trump has been accused of underplaying the danger of the virus even as his administration has imposed travel restrictions and struggled to expand the distribution of testing kits. In private, the president has complained that his own health secretary was being “alarmist,” but fear over the virus has begun to ripple through the economy and society in remarkable ways, as organizations cancel conventions and travel, schools and universities begin to cancel in-person classes and airlines and hotels weigh significant layoffs.

The impact on American life was evident even in Mr. Trump’s own schedule. Aside from the fund-raiser, he had been scheduled to address a global health care conference in Orlando, but it was canceled because of fear of coronavirus.

Mr. Trump is scheduled to attend a conference of the Republican Jewish Coalition in Las Vegas this weekend and has made no changes to his plans so far.

Former Senator Norm Coleman, Republican of Minnesota and chairman of the group, sent out a message to people planning to attend intended to reassure them about the low risk of coronavirus by citing the president’s participation.

“It’s important to note that we have the most protected and high-profile speaker in the country attending, President Donald J. Trump,” he wrote. “Our regular communications with both the White House Coronavirus Task Force and Secret Service indicate that the president would not be at risk at our conference and as such have every intention of joining us this coming weekend. Should that change, we will of course let you know.”

Matthew Brooks, the coalition’s executive director, denied that organizers were considering canceling the event. “It is absolutely categorically untrue,” he said in an interview. “We’ve had no conversations about canceling, no pressure. These are decisions we have made internally.”

“Ultimately people have to make their own decisions,” he added. “The amount of cancellations and attrition has been less than 10 percent. Part of our decision is letting the marketplace decide.”