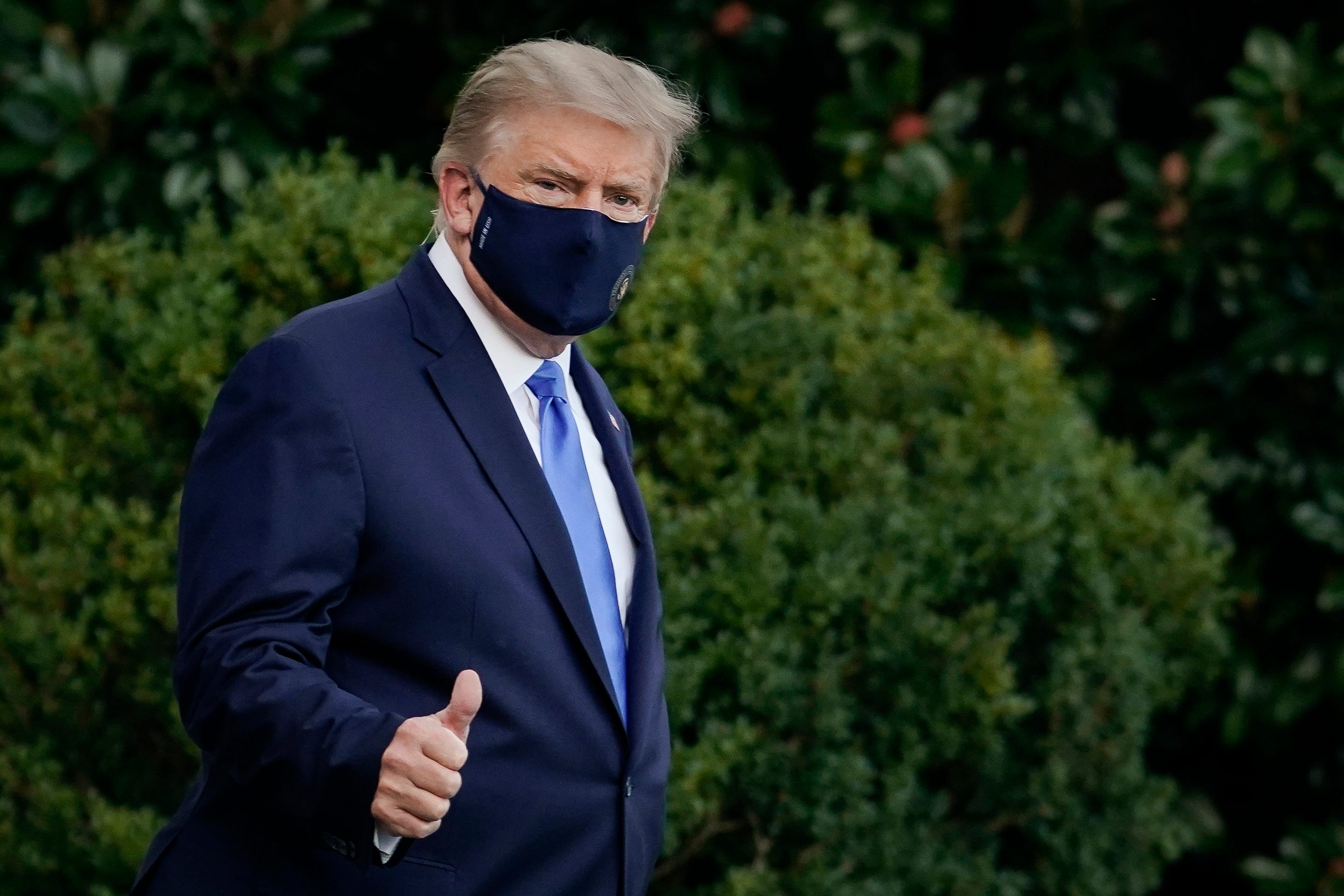 WASHINGTON – President Donald Trump claimed Sunday he no longer has COVID-19 even though the White House refuses to say whether he has tested negative for the disease.

Just hours after his physician issued a memo saying he is no longer “a transmission risk” to others, Trump said in an interview on Fox News that he no longer has the disease and suggested he is now immune to the coronavirus.

Trump did not say in the interview whether he has tested negative for COVID-19. The memo issued late Saturday by his physician, Dr. Sean Conley, didn’t address that issue either.

Trump, who was hospitalized for three days last week at Walter Reed Military Medical Center for treatment for COVID, said during a telephone interview with Fox News’ Sunday Morning Futures that he feels great and that he is not taking any medications for the disease.

“The president is in very good shape,” he said.

Trump suggested he is now immune from the coronavirus and that he has “a protective glow” from the virus that has killed nearly 215,000 Americans.

Medical experts say people who get COVID generally develop antibodies that might protect them from a second infection, although there’s no guarantee how long that protection might last or whether it’s completely effective.

“It looks like I’m immune for, I don’t know, maybe a long time and maybe a short time,” Trump said.

Trump announced Oct. 2 that he and first lady Melania Trump tested positive for COVID-19. Since then, an array of White House officials and top Republicans have also tested positive, several who were in attendance at a Sept. 26 Rose Garden announcement of Trump’s Supreme Court pick. That gathering has since been deemed a “superspreader” event.

“Moving forward, I will continue to monitor him clinically as he returns to an active schedule,” Conley wrote.

The White House has refused to reveal the last time Trump tested negative for coronavirus.Trump spokesman Brian Morgenstern dodged the question six times during an appearance Friday on MSNBC.

Super spreader events: How do they cause COVID-19 outbreaks and is the White House now a hot spot?

Conley released his memo just hours after Trump held a campaign-style rally at the White House. Hundreds of people attended the event in which Trump, speaking from a White House balcony overlooking the South Lawn, sought to fire up Black and Latino supporters.

In his interview with Fox News, Trump defended his decision to hold the event and speak to the crowd.

“I was on a balcony,” he said. “The closest person was probably a couple of hundred feet away. And they were down on the grass. There was nobody even close to me.”

Trump returns to the campaign trail this week, with rallies in Florida on Monday, Pennsylvania on Tuesday and Iowa on Wednesday.

Targeting women:Trump campaign’s pitch to women voters: Let’s get back to pre-pandemic ‘normal’