WASHINGTON — President Trump has privately expressed frustration to numerous officials about his administration’s efforts to stop a possible outbreak of the coronavirus and has discussed appointing a “czar” to manage the administration’s response, according to someone familiar with his comments.

But a mixed public message came out of the White House on Wednesday as a White House spokesman denied that Mr. Trump was looking to hire a White House coronavirus coordinator, saying the president was “pleased” with the work that Alex M. Azar II, the health and human services secretary, was doing as the head of a task force that is overseeing the response.

Still, the administration has been struggling with a sluggish reaction, even if Mr. Trump has been reluctant to give in to what he considers an “alarmist” view about the virus, an administration official said.

The president has called a news conference for 6 p.m. to discuss the virus and has publicly praised his administration’s response. On Wednesday morning, he condemned the media for making the coronavirus “look as bad as possible.” In the face of some government experts who see the coronavirus threat as only beginning, he is still convinced that, like the flu, the new coronavirus will dissipate with warmer, more human weather.

It has fallen to Mr. Azar to make the case that the government is up to the task of containing a virus that has infected more than 81,000 people globally, and killed nearly 2,800. For a second day, Mr. Azar was on Capitol Hill Wednesday defending his work, telling lawmakers that he was overseeing “the smoothest interagency process I’ve experienced in my 20 years of dealing with public health emergencies.”

“The president and I spoke this morning as he returned from India, and he said, ‘I want to continue being radically transparent. When you come over to brief me this evening, let’s sit and invite the press in,’” he told a House committee as he testified about his department’s budget.

Mr. Trump’s reassurances at least in part appear aimed at calming global markets. A day after its worst one-day slide in two years, the S&P 500 closed down 3 percent on Tuesday, a decline that put the index deeper in the red for 2020.

On Wednesday, Moody’s Analytics said it now sees a 40 percent chance that the virus will break containment in China and grow into a global pandemic that would push the United States and the world into a recession. Its chief economist, Mark Zandi, said in a research note that he expected the virus to reduce American economic growth by 0.2 percentage points this year — and that a “black swan” recession now looked uncomfortably possible.

“The economy was already fragile before the outbreak and vulnerable to anything that did not stick to script,” he wrote. “Covid-19 is way off script.”

With cabinet secretaries fanned out on Capitol Hill, Wednesday featured more sharp questioning about the administration’s preparedness for a virus that has now infected more than 81,000 people globally and killed more than 2,700.

“There is now community transmission in a number of countries outside Asia, which is deeply concerning,” Mr. Azar told House lawmakers on Wednesday. “We expect to see more cases here.”

Mr. Azar said that the C.D.C. has already exhausted the $105 million rapid response fund that the federal government had been using in its initial response efforts. He has proposed shifting $136 million from other health programs to the coronavirus to replenish the government’s efforts.

Mr. Azar faced bipartisan concern about the administration’s request for additional funding, as top lawmakers and staff began discussions on an emergency spending package to counter the outbreak — a package that is expected to be much larger than the $2.5 billion request the White House submitted Monday evening.

Lawmakers from both parties have said the White House request is far short of what is needed. It includes less than $2 billion in new funding and relies on the transfer of existing funds — including $535 million intended to counter the spread of the Ebola virus. In a briefing Tuesday morning with senators, administration officials said that they understood that the package would need to grow, according to a Senate aide familiar with the exchange but unauthorized to discuss publicly. 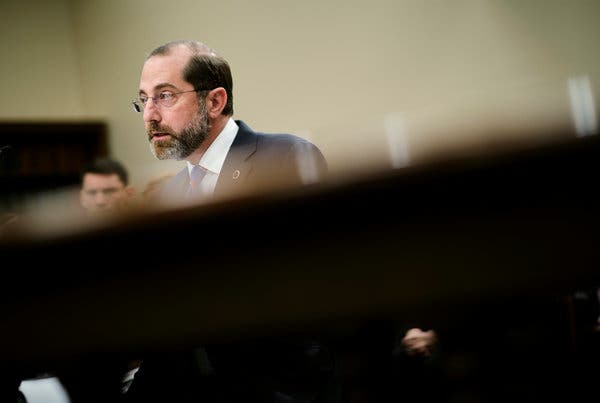 “There is now community transmission in a number of countries outside Asia, which is deeply concerning,” Alex M. Azar II, the health and human services secretary, told House lawmakers on Wednesday. Credit…T.J. Kirkpatrick for The New York Times

Representative Rosa DeLauro, Democrat of Connecticut and the chairwoman of the House Appropriations subcommittee that funds health programs, blasted the White House’s funding proposals as “unacceptable.”

“We want to be supportive,” she told Mr. Azar.

Representative Mark Pocan, Democrat of Wisconsin, asked Mr. Azar if he would accept some of the $3.8 billion in federal defense funds that had been redirected to the construction of a wall on the southern border.

“I don’t believe that the administration would be supportive of that,” Mr. Azar said with a chuckle. “But Congress will make the decisions.”

Senator Chuck Schumer of New York, the Democratic minority leader, proposed on Wednesday to increase that dramatically, to $8.5 billion in new emergency funds.

When he announced his coronavirus proposal Wednesday morning, Mr. Schumer pointed to the $6 billion Congress appropriated for a 2006 flu pandemic and the $7 billion it carved out for the H1N1 flu in 2009. His new plan includes $3 billion for a public health emergency fund, $1.5 billion for the C.D.C., $1 billion for vaccine development and $2 billion for reimbursing states and cities for efforts they have so far made to monitor and prepare for potential new cases of the virus.

She said that hospitals and schools should begin preparing for an outbreak, and that she had even spoken to her own family about “significant disruption of our lives.”

On Tuesday, Mr. Azar told a Senate panel that medical supplies were badly needed for the nation’s emergency stockpile, including 300 million masks for health care workers alone, he said.

Mr. Trump’s attempts to calm the American public have also occasionally been laced with a degree of alarm.

“There’s a very good chance you’re not going to die,” Mr. Trump said about the outbreak at a news conference in India on Tuesday.

Speaker Nancy Pelosi, asked about Mr. Trump’s claims that the coronavirus is under control, told reporters, “I don’t think the president knows what he’s talking about — once again.”

“Hopefully we can make up for the loss of time,” Ms. Pelosi said on Wednesday. “But it has to have the professionals in place, the resources that are adequate, and not using scare tactics about people coming back to our country.”

Lawmakers have expressed alarm that the Trump administration has yet to appoint a czar-like position at the White House, which President Barack Obama did in 2014 to handle the Ebola virus. That role, and a global health expert slot on the National Security Council, have been vacant for years.

“I’m not sure who’s on the task force,” Senator Mazie Hirono, a Hawaii Democrat, said on Tuesday as she left a briefing with federal health officials.

She added: “This is why we do need somebody that’s like a coronavirus czar as we had during the Ebola situation. And so far we don’t have such a person to work across the departments.”

As he defended his role on the task force Wednesday morning in front of the House panel, Mr. Azar said he was unsure why the Obama administration felt like the federal response to Ebola was not working. He said he was working every day with Mr. Trump and Mick Mulvaney, the acting White House chief of staff.

Ronald Klain, who held the Ebola position in the Obama White House, said, “One cabinet secretary cannot run an interagency response. Azar has the biggest civilian job in the American government. Is he doing this in his spare time?”

At the Wednesday hearing on the health department’s budget, lawmakers questioned Mr. Azar about public health-related cuts the Trump administration has proposed, in addition to his plans to fund the coronavirus response, for which the White House has sought billions of dollars from Congress.

A chart obtained by The New York Times on Tuesday shows that Mr. Azar is proposing shuffling money from key health programs to fund the administration’s response, including some that are central to Mr. Trump’s agenda, like H.I.V. and AIDS prevention, rural health and cancer research.

The 2021 health and human services budget calls for broader public health cuts separate from the White House’s plans to transfer money to handle coronavirus efforts. For the fiscal year that begins in October, the C.D.C.’s budget could be slashed by almost 16 percent, and the Health and Human Services Department’s by almost 10 percent. Tens of millions of dollars would come from the department’s Office of Public Health Preparedness and Response and its Hospital Preparedness Program, which helps hospitals handle surges of patients during disease outbreaks.