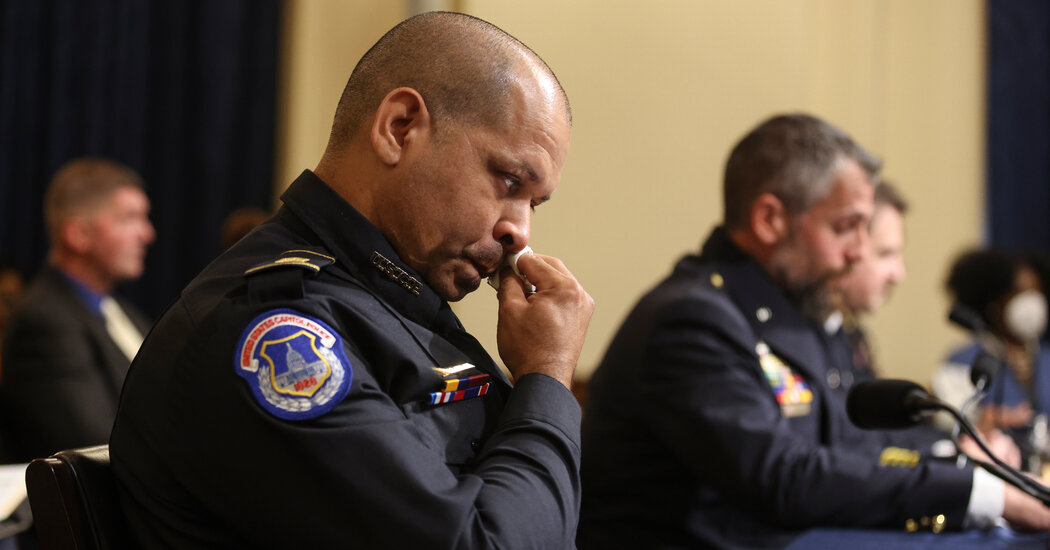 Inside a room at the Cannon House Office Building on Tuesday, witnesses testified to their experience on Jan. 6, when an armed mob egged on by President Donald J. Trump breached the Capitol. It eventually reached the Senate chamber, where senators had been certifying Joseph R. Biden Jr.’s victory under the gavel of Vice President Mike Pence, whom some of the rioters chanted that they wanted to hang.

But outside the room, prominent Republicans have painted a very different, significantly misleading picture of that day.

On Tuesday morning, Representative Elise Stefanik of New York falsely blamed Nancy Pelosi, the House speaker, for the breach, saying she had ignored evidence that the Capitol’s security might be compromised in favor of her own “partisan political optics.”

Last month, Senator Ron Johnson of Wisconsin, a leading G.O.P. purveyor of misinformation, downplayed the attack with the false claim that the rioters had stayed “within the rope lines” inside the Capitol.

And this month, Mr. Trump falsely suggested that law enforcement officers had been the only ones with firearms and said that “the doors were open.”

In American life, truth is now contested. And while this has profoundly affected the country’s politics, and so much else, it has raised unique challenges for one group in particular: journalists.

After all, the high-profile Republicans who are obfuscating the events of Jan. 6 are undeniably newsworthy. Ms. Stefanik is the third-ranking House Republican; Mr. Johnson may seek re-election in a pivotal Senate race; polls indicate that Mr. Trump would be the commanding front-runner if he seeks the Republican presidential nomination in three years.

Their political influence would normally demand coverage. Yet journalists will never feel comfortable publishing anything they know to be false. Social media has also raised the stakes of airing misleading statements, even in the service of conveying the news. If a lie can make it halfway around the world before the truth can get its pants on, then maybe the act of printing a falsehood and debunking it in the next sentence is just giving the falsehood a head start.

Mainstream outlets have tried to square this circle by contextualizing problematic quotes and allegations. But this is difficult to do well, and it may be impossible to strike the exactly correct balance.

“I don’t think the answer is to ignore them,” Bill Grueskin, a professor at Columbia Journalism School and a former senior editor at The Wall Street Journal, said of top Republicans who say misleading things, “because they don’t represent a fringe part of the Republican Party — a sizable number of Republican voters believe the Democrats were responsible for the insurrection and have somehow convinced themselves that Trump was not culpable.”

Over the course of Mr. Trump’s presidency, the news media became more comfortable with straightforwardly identifying falsehoods, said Dafna Linzer, who was until recently the managing editor of politics for NBC News and MSNBC.

“Our society spent the last four years being challenged in a way we had not been for a long time when it comes to truth and fact,” she said. “It’s been a long road to get to a place where some news organizations felt comfortable calling a lie a lie.”

In Cleveland, The Plain Dealer and its website have for the past few months tried an alternative tactic. When its reporters and editors determine that a notable politician — be it Josh Mandel, a Republican Senate candidate in Ohio; Dennis Kucinich, a Democratic candidate for Cleveland mayor; or Mr. Trump — has said something false and designed primarily as propaganda, they do not publish it, even in a way that debunks it.

For instance, a dispatch from a Trump rally last month outside Cleveland contained no references to the former president’s spurious claims about the 2020 election, while other outlets did mention them (while clarifying that they were false or baseless).

Chris Quinn, the editor of The Plain Dealer, explained the new policy in March: “We do not knowingly publish ridiculous and idiotic claims.”

Mr. Quinn came to this decision after realizing that Mr. Trump, though not the first politician to spin or mislead, had altered an incentive structure for politicians interacting with the news media that had previously discouraged dishonesty.

“What Donald Trump did, it created a whole bunch of pretenders, where the truth is not important and they don’t care,” he said in an interview today.

“We all have best practices,” he added of news outlets, “and he used it to spread falsehoods left and right.”

Now, Mr. Quinn urges his reporters to seek context. He offered an example from this month, in which a reporter covered a forum in which the Republican Senate candidate J.D. Vance repeatedly referred to illegal immigration as “dirty.” The reporter produced an analysis of how Mr. Vance had transformed in a few years from being someone who would have condemned such language.

“Four years ago,” Mr. Quinn said, describing his newspaper’s own evolution, “we would have had a story: ‘J.D. Vance came to Cleveland, called immigrants “dirty.”’”

This approach has its own drawbacks, including opening up the newspaper to allegations of partisan bias. But to many industry leaders, the days of “he said, she said” without the weight of the journalist’s judgment are long gone.

Joan Donovan, the research director of the Shorenstein Center at Harvard, has advocated a strategy called “strategic silence,” urging news organizations not to give platforms to certain ideas. But while that might be sensible with a fringe white supremacist group, she said in an interview, a different stance is necessary with prominent politicians. She suggested unearthing the motives behind politicians’ false narratives.

“Some journalists don’t like to tilt into what might be called conjecture,” she said, “but you do have to help the audience understand and locate those lies in the context of the moment we’re in, which is a struggle over the definition of what happened on Jan. 6 and what’s to blame.”

On Friday’s episode of his podcast, Ezra Klein spoke with the policy reporter Jerusalem Demsas about why America struggles to build and update its infrastructure, why liberal cities struggle with affordable housing and the rationale and hypocrisy of NIMBYism.

You can listen here and read a transcript here.

Why Scores of Female Athletes Are Speaking Out on Abortion Rights