In political speeches for 40 years, Joseph R. Biden Jr. has evoked his scrappy childhood in Scranton, Pa. He kicked off his presidential run last year in Pittsburgh, and as he takes tentative steps out of home confinement in Wilmington, Del., the campaign trail has often led to the state next door.

Yet surprisingly, Mr. Biden is enjoying no special boost in his native Pennsylvania.

President Trump, mired in the lowest point of his presidency, was viewed favorably by just 43 percent of voters in the six battlegrounds. It helped explain why he trailed Mr. Biden in all six states and by 10 percentage points in Pennsylvania, a dire picture of the president’s chances of re-election.

Still, with four months to go until Election Day, Mr. Trump could well become competitive again. Leaders of his campaign in Pennsylvania, seizing on Mr. Biden’s failure to shine as a favorite son, have sketched out a comeback path for Mr. Trump. Its steps include the Republican Party’s advantage in new voter registrations; a return to in-person organizing while Mr. Biden’s ground game remains virtual; and a range of issues — including energy policy, reopening the economy and defunding the police — that Republicans believe will peel away swing voters in a state Mr. Trump narrowly won in 2016.

“The 10 points doesn’t bother me,” said Lawrence Tabas, the chairman of the Republican Party of Pennsylvania, referring to Mr. Trump’s deficit in the Times poll. “He’s an incumbent president, there’s a crisis and people get angry. It’s a snapshot. He’s been way behind before.”

A spokeswoman for the Biden campaign, Emma Riley, said the former vice president considered Pennsylvania crucial to his 2020 chances.

Pennsylvania Democrats cautioned that the president’s base of rural and exurban voters, who delivered him the state in 2016 in a startling upset, were still largely supportive.

Mr. Trump’s victory in Pennsylvania by a mere 44,000 votes, out of more than six million cast, was a result of sweeping defections by white residents who once voted Democratic, largely in western and northeastern Pennsylvania.

In the 2018 midterm elections and in 2019 local races, Democrats came roaring back as a blue wave swept the Philadelphia suburbs. At the same time, Republicans seized control in blue-collar union counties outside Pittsburgh.

With both parties predicting higher turnout this year than in 2016, winning statewide depends on some delicate dial-twisting: Will the Republican surge in rural counties outweigh the rejection of Mr. Trump by suburban voters, especially independents and women?

And will turnout by Black voters in Philadelphia return to near 2012 levels and offset the inroads Mr. Trump made in the city in 2016?

“The Republican base is very strong outside southeast Pennsylvania,” said Rob Gleason, a former chairman of the state G.O.P., who lives in Johnstown, a city in central Pennsylvania. “It’s immovable. Whenever there’s any type of controversy about his administration, more Trump signs go up and flags get raised.” 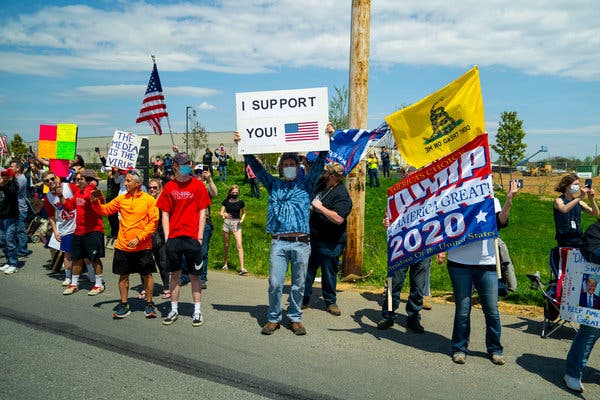 In Cambria County, which includes Johnstown, Democrats have lost 7,000 registered voters since 2016, while Republicans have gained 3,700. Statewide, Democrats retain a historical registration advantage, but the last four years have brought bad news for the party: Republicans have closed the gap on Democrats by 121,000 since November 2016, a measure of enthusiasm that favors the G.O.P.

Mr. Trump, unlike previous incumbents, has done little to reach beyond his core supporters. Since the killing of George Floyd by the police in Minneapolis, the president has played to white voters with racist and inflammatory messages about protesters, Civil War monuments and crime.

Bernadette Comfort, the chair of Mr. Trump’s campaign in Pennsylvania, disputed that he was running a base-only strategy.

Nonetheless, the Times poll showed erosion in the president’s base. Mr. Trump was favored by 86 percent of Pennsylvanians who said they voted for him in 2016, down from 92 percent in a Times poll in October.

In contrast to western Pennsylvania, the growing and racially diversifying counties outside Philadelphia have moved in the opposite direction. Four years ago, registered Republicans outnumbered Democrats by more than 18,000 in Chester County; today, Democrats have an edge of about 1,000.

Shivani Jain, a bank analyst in Chester County, is among the 47 percent of Pennsylvanians with a “very unfavorable” view of Mr. Trump, leaving him a very narrow path to win the state. Ms. Jain, 25, has participated in recent protests.

“As a person of color myself, I find the last few years has been heartbreaking,” she said. “I’m hoping with what I’m seeing with the Black Lives Matter movement and how many of my generation have come out, people take that energy to the voting booth.”

An issue Republican officials believe will help the president is the cautious reopening of the state by Gov. Tom Wolf, a Democrat, which has met furious opposition in some regions with fewer coronavirus cases.

Cynthia Sabat, 52, a Trump supporter who lives east of Pittsburgh, called the governor’s support for the city’s ban on consuming alcohol in bars, after a spike in cases over the weekend, “moronic.”

“Wolf is horrible,” she said. “I don’t subscribe to conspiracy theories — I believe the virus is real — but you can’t just keep people from their livelihoods. They have a right to make a living.”

It is unclear, however, whether this will be a winning issue for the president. In the Times poll, only 27 percent of Pennsylvanians said stay-home orders had gone too far.

Since mid-June, the Trump campaign has returned to in-person door knocking and has held training sessions for volunteers without masks or social distancing. The campaign, which says it has 106 organizers in the state to identify and motivate supporters, appears to be ahead of Mr. Biden’s ground game.

“They haven’t hired a state director,” Michael Joyce, a spokesman for the Republican National Committee, said of the Biden team. “They simply don’t have the ground game, the data operation, the infrastructure every campaign needs to get their candidate across the finish line. It’s too late to catch up.”

The Biden campaign did not dispute its lack of a state director, but said it was working with the Democratic National Committee and state parties to place hundreds of organizers in battleground states including Pennsylvania. Rebounding from 2016, when Hillary Clinton could not find enough local field staff members, Democrats have trained more than 100 organizers in communities of color in the state.

A potentially potent issue for Republicans is Mr. Biden’s energy policy, as progressives like Representative Alexandria Ocasio-Cortez of New York push him to endorse the Green New Deal.

“Joe likes to claim he’s for Pennsylvania and understands Pennsylvania — on that point alone, he will lose western Pennsylvania with this energy policy,” Ms. Comfort said.

A pro-Trump super PAC, America First Action, spent nearly $800,000 on attack ads in the state in June, claiming that Mr. Biden would ban fracking for natural gas, an industry that has brought thousands of jobs to southwestern Pennsylvania.

The ads misleadingly edit a statement of Mr. Biden’s from a debate to suggest he would “eliminate” coal and fracking. In the full quotation, he said he would eliminate “subsidies” for fossil fuels.

The Biden campaign said in a statement that Mr. Biden did not endorse the Green New Deal. His climate plan calls for a ban on new oil and gas drilling on public lands, though not on private property.

“There’s clearly an effort by the Trump campaign to mischaracterize his position,” said Representative Conor Lamb, a pro-fracking Democrat who won his seat in 2018 by carrying some of Pittsburgh’s red-hued suburbs.

Mr. Lamb said that four years after Mr. Trump campaigned by promising to restore blue-collar jobs, there was little to show for it. “We’ve seen steel-related jobs and coal-related jobs go away,” Mr. Lamb said. “The president has four years of a record and he hasn’t delivered.”

A third issue that Republicans said they would lean into in the state is the movement to defund police departments. That has become a focal point of some protesters, including those in South Philadelphia who have faced off against armed counterprotesters at a statue of Christopher Columbus.

“How many white women suburban voters will support that?” asked Mr. Joyce of the R.N.C., referring to calls to defund the police. The issue will “hand the suburbs right to us,” he added.

Tami Drumheller, a Republican in Berks County, in the exurbs of Philadelphia, might seem to be one such voter. She voted for Mr. Trump in 2016 but remains undecided this year. “He’s all for defunding the police and taking away our rights to defend ourselves,” she said of Mr. Biden. (While many Democratic officials support reallocating money from police departments to social services, Mr. Biden does not.)

Ms. Drumheller, an office administrator, might come home to the Republican Party in November. But to listen to her now, it is far from certain.

“He needs to be more understanding about where these people are coming from,” she said of the president and the protesters. “I am a middle-class white female. I do have African-American nephews.” It is not her own voice that society needs to hear, she said. “It’s my nephews’ voices.”

“How the president comes off,” she said, “he comes off very ignorant about everything.”