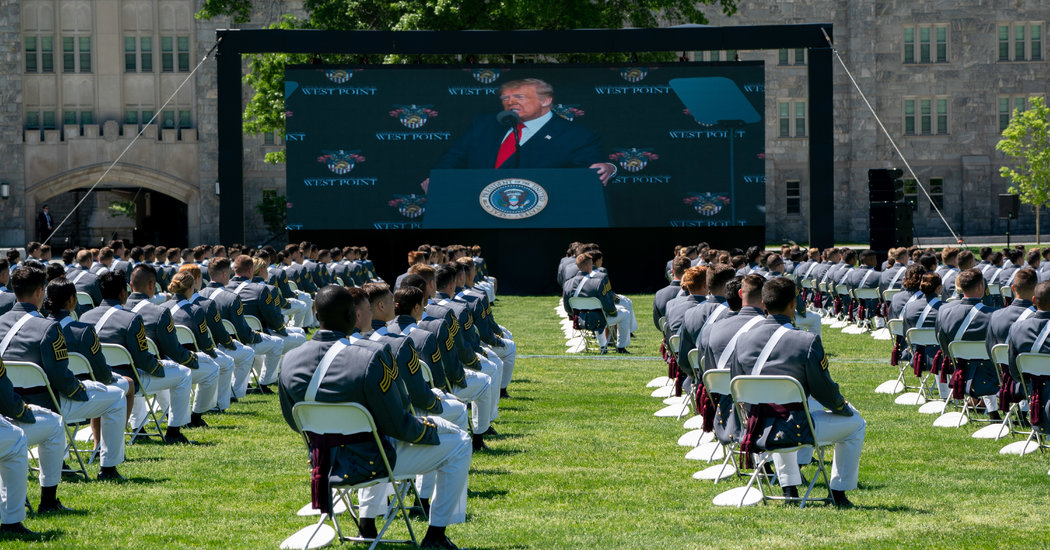 President Trump oversold his administration’s military record in a commencement speech at the United States Military Academy at West Point on Saturday. Here’s a fact-check of his claims.

“To ensure you have the very best equipment and technology available, my administration has embarked on a colossal rebuilding of the American armed forces, a record like no other. After years of devastating budget cuts and a military that was totally depleted from these endless wars, we have invested over $2 trillion — trillion, that’s with a ‘T’ — in the most powerful fighting force by far on the planet Earth.”

This is misleading. The $2 trillion figure refers to the defense budgets for the past three fiscal years: $671 billion in 2018, $685 billion in 2019 and $713 billion in 2020. But Mr. Trump’s suggestion that the military was “depleted” when he entered office and had seldom received such a large amount of money is wrong.

Adjusted for inflation, the Pentagon operated with larger budgets every year from the 2007 fiscal year to 2012 fiscal year, peaking at $848 billion in 2008.

Though the Trump administration has invested in operational readiness, there are signs that the military continues to face substantial challenges in addressing an array of threats from around the world.

For example, the military earned a middling grade of “marginal” last year in the conservative Heritage Foundation’s annual index of military strength, based on factors like shortages in personnel and aging equipment. The think tank noted that American forces are probably capable of meeting the demands of a single major regional conflict but “would be very hard-pressed to do more and certainly would be ill-equipped to handle two nearly simultaneous major regional contingencies.”

While the military has received some new equipment, it still continues to use aging supplies, including decades-old planes, ships and submarines.

Obtaining new equipment can also be a long process. In May 2018, for example, Mr. Trump told Naval Academy graduates that the Navy’s fleet would grow to 355 ships “very soon” — a number officials estimated would not be reached until the 2050s. More than two years after Mr. Trump made that claim, Navy records show it has a fleet of 299 “deployable battle force ships,” an increase of 16 ships.

“The savage ISIS caliphate has been 100 percent destroyed under the Trump administration.”

This is exaggerated. While the Islamic State has been pushed out of its so-called caliphate, the extremist group continues to carry out attacks. And some of the territorial gains made by American troops and their allies predate the Trump administration.

The research firm IHS Markit estimated that the Islamic State lost about a third of its territory from January 2015 to January 2017, while Brett McGurk, the former special presidential envoy to the coalition fighting the group, has said 50 percent of those losses occurred before 2017.

Officials and experts had always anticipated that the campaign, which started in 2014 during the Obama administration, would result in pushing the extremist group out of its self-declared caliphate.

In October, Mr. Trump tweeted a claim similar to what he said in his West Point speech. “When I arrived in Washington, ISIS was running rampant in the area,” Trump said. “We quickly defeated 100% of the ISIS Caliphate.” Mr. McGurk responded to the president on Twitter that “none of this is true.”

“We are ending the era of endless wars. In its place is a renewed cleareyed focus on defending America’s vital interests.”

This is exaggerated. Mr. Trump campaigned on a promise to end wars in the Middle East but has yet to fulfill this promise.

In February, the United States signed a deal with the Taliban laying out a timetable for the final withdrawal of U.S. troops from Afghanistan within 12 to 14 months if the insurgent group met certain conditions. In recent months, Mr. Trump has repeatedly voiced a desire to leave Afghanistan sooner than that.

The New York Times reported in May that there were fewer than 12,000 troops in Afghanistan, a higher number than the 9,200 who were there at the end of 2016.

In December 2018, Mr. Trump ordered the withdrawal of 2,000 American troops from Syria. Roughly 1,000 remained by October 2019, when Mr. Trump ordered withdrawal again. A February report from the Defense Department’s inspector general estimated that 500 troops remained in northeastern Syria and an additional 100 were stationed at a desert outpost in the southeast. (In comparison, the Obama administration announced in December 2016 that it was increasing its forces deployed to Syria to 500.)

There are currently about 5,200 American troops in Iraq — about level with the 5,262 reported at the end of 2016. Though there are plans to reduce the number to as few as 2,500, there are no fixed timetables or numbers.

Curious about the accuracy of a claim? Email factcheck@nytimes.com.