President Trump on Monday flatly denied that systemic problems existed in American police departments, declaring that as many as 99.9 percent of the nation’s officers are “great, great people” as he rebuffed mass street protests denouncing racist behavior in law enforcement.

Mr. Trump, who has adopted an uncompromising law-and-order posture and scorned demonstrations that have broken out in cities nationwide, surrounded himself with law enforcement officials at the White House and tried to link liberals’ calls to defund the police to his Democratic opponent, former Vice President Joseph R. Biden Jr. — even though Mr. Biden came out earlier against defunding the police.

While Trump advisers had hoped to tie Mr. Biden together with the protesters to try to hurt him with moderate and independent voters, Mr. Biden’s campaign undercut that tactic by announcing that he “does not believe that police should be defunded,” while noting that he “supports the urgent need for reform.”

The back-and-forth highlighted how drastically the campaign has changed in the two weeks since George Floyd died after a white police officer kneeled on his neck in Minneapolis. Mr. Biden has spent much of that time expressing solidarity with protesters against racial injustice, and on Monday traveled to Houston to meet with Mr. Floyd’s family in advance of Tuesday’s funeral. Mr. Trump has sought to appeal to his hard-core base with threats to use force in the streets and other harsh language to try to show he has no tolerance for disorder.

Mr. Trump called the family of Mr. Floyd last month, but he has not met with protest leaders or major African-American political figures since the demonstrations erupted. White House officials have explored the possibility of a trip by Mr. Trump or Vice President Mike Pence to Minnesota but so far have backed off the idea, recognizing that neither would be welcome by many there.

While aides said on Monday that Mr. Trump was studying possible proposals for changes to law enforcement, the president himself made little effort to suggest as much during his appearance with law enforcement officials.

“Our police have been letting us live in peace,” he said, “and we want to make sure we don’t have any bad actors in there and sometimes we’ll see some horrible things like we witnessed recently, but I say 99.9 — let’s go with 99 percent of them — great, great people and they’ve done jobs that are record setting.” Mr. Trump took no questions from reporters invited to record the event.

Recent polls indicate that Mr. Trump is out of step with many Americans on the protests, some of which have unfolded in Republican-leaning states that voted for him in 2016. A Monmouth University poll released last week found that 76 percent of Americans — including 71 percent of white people — called racism and discrimination “a big problem” in the United States, a 26-percentage-point spike since 2015. In that poll and others, majorities of Americans said that demonstrators’ anger was fully justified and that police officers were generally more likely to treat black people unfairly than to mistreat white people.

Mr. Trump’s own numbers have been sliding in battleground states like Michigan and Wisconsin, and states that supported him four years ago like Florida, Arizona, North Carolina and even Texas appear increasingly in play. The president was so agitated over a new CNN national poll showing him 14 percentage points behind Mr. Biden on Monday that he posted online a memo from his own pollster calling surveys by major networks biased against Mr. Trump.

Officials at the White House said that Mr. Trump wants to focus on a law-and-order message both because he thinks it is his best political option and because it is his instinctive default setting on matters involving the police. Mr. Trump has long sought to divide people by race going back to the days when he took out full-page ads calling for the death penalty for the Central Park Five, a group of Latino and African-American teenagers later exonerated in a sensational rape case.

Even as the president has described some protesters as “thugs” and threatened to unleash “vicious dogs” on any who tried to enter White House grounds, advisers have suggested that Mr. Trump should give a speech going beyond previous statements or find another way to show that he hears the anger from protesters about police misconduct. Two officials said that there is still a push for Mr. Trump to hold “listening” sessions, an idea they have floated since shortly after Mr. Floyd was killed. 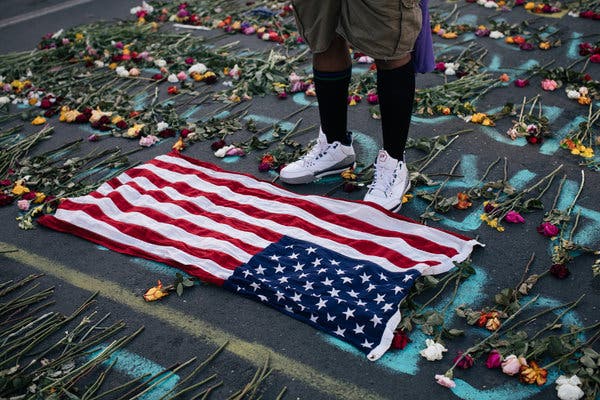 A memorial for George Floyd in Minneapolis.Credit…Alyssa Schukar for The New York Times

In private, Mr. Trump has been musing about race in America since Mr. Floyd’s death and his own response. In a meeting last week with roughly two dozen White House aides, campaign officials and surrogates, Mr. Trump expressed unhappiness about Mr. Floyd’s killing but immediately said the country needed law and order, according to people who spoke on condition of anonymity to describe his private comments. He said nothing more broadly about police treatment of black people in the United States.

Instead, he meandered as he talked, saying that he had signed legislation overhauling criminal justice in 2018 not because it was an issue that he was passionate about, but because Jared Kushner, his son-in-law and senior adviser, had wanted him to, according to one of the people familiar with what was said.

He also mused about how he has asked people whether they prefer being called “black” or “African-American,” an issue he had his campaign research.

At another point, Mr. Trump talked about the protesters, questioning whether they were peaceful and citing the fire last week at St. John’s Church, a block from the White House. The fire caused relatively minor damage in a basement but has been seized on repeatedly by Mr. Trump and his advisers as a justification for forcibly pushing demonstrators out of the area a day later.

Republicans privately said they saw the cry for defunding as a political gift, one that will alienate middle-of-the-road voters and energize the president’s base. Mr. Trump’s advisers on Monday held a media call with Ken Blackwell, the former mayor of Cincinnati, and Carolyn Welsh, a former sheriff in Pennsylvania, to try to link Mr. Biden to the issue.

After Mr. Biden’s campaign declared that he did not support defunding police, Mr. Trump’s aides pressed the matter, calling it a “weak statement” by a staff member. “As the protesters like to say, silence is agreement,” said Tim Murtaugh, the Trump campaign’s communications director. “By his silence, Joe Biden is endorsing defunding the police.”

Joseph R. Biden Jr.’s campaign has said that he does not support defunding the police.Credit…Hannah Yoon for The New York Times

Since Mr. Floyd’s death, Mr. Biden has urged Congress to pass several measures on policing, such as banning chokeholds and stopping the transfer of military weaponry to police departments. Last year, Mr. Biden called for spending hundreds of millions of dollars on community policing programs, including hiring more officers.

Even some of the law enforcement officials invited to meet with Mr. Trump urged him to support change. Sheriff Tony Childress of Livingston County in Illinois endorsed mandatory de-escalation training for officers; a ban on all physical restraint on or above the neck and any acts that restrict the flow of blood or oxygen to the brain; and requirements that officers render medical aid and intervene when physical force is being inappropriately applied.

“We look forward to working with you to hopefully getting legislation involved in making these things true and making them law,” Sheriff Childress told Mr. Trump.

Mr. Trump, who brought no advisers of color with him for his Bible-holding photo op at St. John’s last week, included Ja’Ron Smith, the deputy director of the White House Office of American Innovation, in Monday’s event.

“As an individual, I’ve also had the fear of living in a certain neighborhood or driving certain types of cars as an African-American just because of my relationship with the police,” Mr. Smith said. “There are a lot of African-American males across the country that have stories that they can share.”

But he added that police officers should not be demonized. “We can’t let a few bad apples represent something that is the core of everything we do,” he said.

Attorney General William P. Barr, in an interview with Fox News on Monday, said that the demonstrations were so bad at the end of May that the Secret Service recommended that President Trump go to his bunker for safety, contradicting the president’s claim that he went there to check it out.

‘Things were so bad that the Secret Service recommended the President go down to the bunker,” Mr. Barr said. “We can’t have that in our country.”