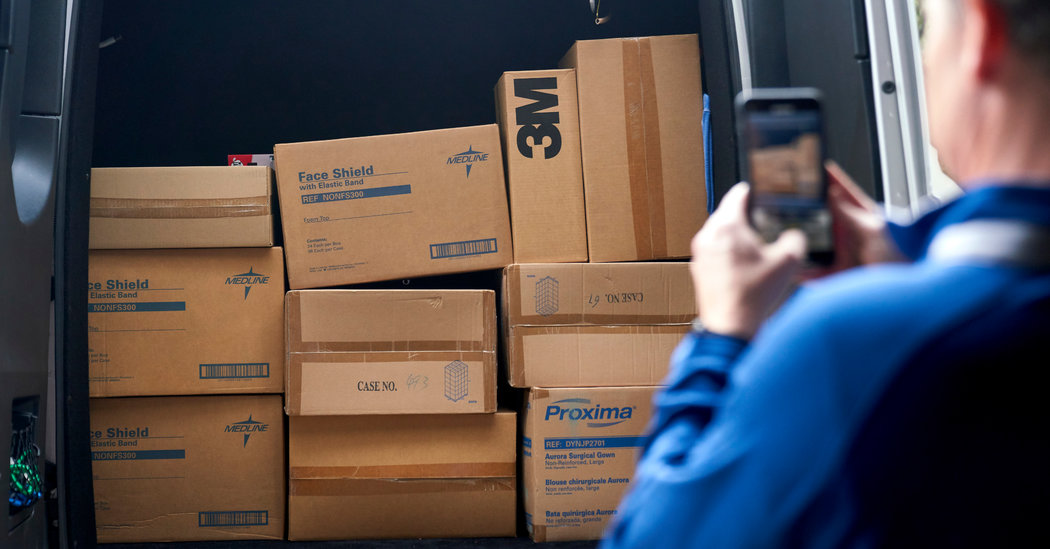 WASHINGTON — President Trump and his advisers have resisted calls from congressional Democrats and a growing number of governors to use a federal law that would mobilize industry and provide badly needed resources against the coronavirus spread, days after the president said he would consider using that authority.

Mr. Trump has given conflicting signals about the Defense Production Act since he first said on Wednesday that he was prepared to invoke the law, which was passed by Congress at the outset of the Korean War and grants presidents extraordinary powers to force American industries to ensure the availability of critical equipment.

The next day, he suggested that obtaining medical equipment should be up to individual governors because “we’re not a shipping clerk.” But on Friday, he reversed himself, asserting that he had used the law to spur the production of “millions of masks,” without offering evidence or specifics about who was manufacturing them or when they would reach health workers.

And Senator Chuck Schumer of New York, the Democratic leader, said that he was left with the impression after talking with Mr. Trump that he had decided to move to put the act into effect. He said “a commitment on the phone was a good start,” but that the president now needed to push the government “to move full steam ahead.”

But Mr. Trump’s confusing statements played out in the middle of a growing health crisis that within days has abruptly and indefinitely altered the course of American life.

With the number of coronavirus cases in the United States surging above 17,000 — over 40 percent of those concentrated in New York — front-line health care workers have reported a dire shortage of masks, surgical gowns and eye gear to protect them from the virus. State lawmakers have also implored the president to help them get the supplies they need.

Business leaders have said invoking the defense law is not necessary. During his appearance with the members of his coronavirus task force on Friday, Mr. Trump supported that idea and said that private companies, including General Motors, had volunteered to produce supplies without any prompting from the government.

“We are literally being besieged in a beautiful way by companies that want to do the work and help our country,” Mr. Trump said. “We have not had a problem with that at all.”

Some of the president’s advisers have privately said that they share the longstanding opposition of conservatives to government intervention and oppose using the law, and the president again signaled his own ambivalence about it.

Asked Friday night about specific ways the Defense Production Act has been used, the White House said in a statement that the president was “currently using it to drive the private sector’s response to this crisis,” and that he had invoked the act “to ensure that the necessary authorities will be available to prioritize production of items under government contracts and to allocate scarce items where they are needed most.”

In signing the executive order on Wednesday to put the act into effect, Mr. Trump said the purpose was to expedite distribution of “health and medical resources needed to respond to the spread of Covid-19, including personal protective equipment and ventilators,” and that Alex M. Azar II, the secretary of health and human services, could order production and distribution of supplies, if necessary.

But the president did not say if masks and ventilators in anything near the necessary quantity have actually been delivered to the workers who need them.

During Friday’s briefing, Mr. Trump grew increasingly confrontational with reporters as they pressed him on the details of the Defense Production Act, and he snapped at Peter Alexander, a reporter for NBC News, who asked him what he would say to Americans who were scared.

“It is a bad signal that you are putting out to the American people,” the president continued. “You want to get back to reporting instead of sensationalism. Let’s see if it works. I happen to feel good about it. Who knows. I have been right a lot. Let’s see what happens.”

As the coronavirus has spread, Mr. Trump has come under withering attack from Democrats for the speed at which he has mobilized the government to respond.

“We’re talking about a president who is basically doing what Herbert Hoover did at the beginning of the Depression and minimizing the danger and refusing to use available federal action,” Mayor Bill de Blasio of New York said Friday in an interview with the radio station WNYC. “And people are going to die, and they shouldn’t, they don’t have to, if we could get the support that we’re asking for.”

Republicans have not been openly critical, but some governors have been explicit in describing their difficulties in depending on the private sector for medical supplies.

In a call held on Thursday with Mr. Trump, a group of governors stressed to him that they were struggling to address the staggering demand for equipment.

At one point, Gov. Kristi Noem, Republican of South Dakota, grew frustrated as she expressed to the president and members of the coronavirus task force that state officials had been working unsuccessfully with private suppliers.

“I need to understand how you’re triaging supplies,” Ms. Noem said. “We, for two weeks, were requesting reagents for our public health lab from C.D.C., who pushed us to private suppliers who kept canceling orders on us. And we kept making requests, placing orders.”

She added, “I don’t want to be less of a priority because we’re a smaller state or less populated.”

Mr. Trump promised her that would “never” happen before Ms. Noem’s telephone line was disconnected.

When it was originally passed, the Defense Production Act granted President Harry S. Truman the power to spur the production of aluminum, titanium and other needed materials during wartime. Since then, it has been used for both the prevention of terrorism and to prepare for natural disasters.

The act would give the Trump administration the authority to override companies’ existing contracts and to direct supplies to hot spots like New York City or Seattle. It could also help mobilize funds for retooling factories, refitting pharmacy drive-throughs into testing sites and ramping up production of an eventual vaccine.

But John Murphy, the senior vice president for international policy at the U.S. Chamber of Commerce, said that corporate executives were already working “hand in glove” with the government on production challenges.

“American companies will do whatever it takes to support our country’s response to the pandemic and shore up the economy,” he said. “The Defense Production Act was designed for defense industry products with a single supplier, often with purely domestic production chains, and invoking it may do more harm than good in sectors such as pharmaceuticals and medical equipment.”

Companies that manufacture face masks, medical wipes and other supplies say they are already operating around the clock to meet elevated demand. Some factories that make similar products — like surgical gowns, diapers and incontinence products — have already switched over to manufacture the face masks or other protective gear that health care workers need.

But people familiar with the administration’s actions say it is still trying to figure out how industry supply chains operate, which companies could produce additional products and what kinds of subsidies it may need to offer.

And without the Defense Production Act, the government will lack the ability to channel these supplies to areas that need it most — or to persuade companies to act quickly and without regard for their profits.

As reported cases of the virus in the United States have soared, Mr. Trump, who is known to recruit input from a variety of outside advisers, has been getting conflicting advice. The proliferating number of private sector voices with direct access to the president and his top advisers — notably his son-in-law and adviser, Jared Kushner — has resulted in a chaotic process.

The president’s advisers say they see the role of the federal government as a facilitator, as opposed to the chief producer or a national governor. They have tried to encourage states to get by with what they can, suggesting there will be support from the federal government but that this should not be the first option.

In practice, the administration has been trying to use the provision to jawbone companies into taking voluntary action while holding over them the possibility that the federal government would intervene, according to administration officials familiar with the state of play.

“We’re actually encouraged that the partnership with the private sector can meeting many of these needs,” said Marc Short, Vice President Mike Pence’s chief of staff, on Friday morning in a discussion with reporters.