President Trump ordered the federal government late Friday to design and construct a statuary park honoring “American heroes,” his latest embrace of American heritage in opposition to what he has described as a revolutionary leftist movement that would “erase our values.”

The White House issued the executive order shortly after Mr. Trump delivered a combatively political speech at Mount Rushmore denouncing recent acts by anti-racism protesters who destroyed or defaced national monuments. The order declares that he will “not abide an assault on our collective national memory.”

Mr. Trump directed the creation of a task force, chaired by the secretary of the interior, to “expeditiously” open a “National Garden of American Heroes” at a site to be determined. His order specifies 31 Americans whom the garden must memorialize, a group of mostly white men that includes former presidents, pioneers and explorers, abolitionists and civil rights heroes.

Mr. Trump’s order, which does not put a price tag on the project, says only that it should be located near a population center “on a site of natural beauty that enables visitors to enjoy nature, walk among the statues, and be inspired to learn about great figures of America’s history.” It also notes that all statues in the garden “be lifelike or realistic representations of the persons they depict, not abstract or modernist representations,” echoing prior efforts within the Trump administration to reject modernist designs for federal projects.

“Presidents certainly have a role in shaping national conversations about the meaning of our history. But this comes off as a desperate act of political grandstanding to his base,” said Kevin K. Gaines, a professor of social justice and civil rights at the University of Virginia. “Washington D.C. is already full of national monuments to some of the revered figures on Trump’s roll call of heroes.”

The order says the task force will consist of several federal officials, including the administrator of the General Services Administration and the chairpersons of the National Endowment for the Arts and the National Endowment for the Humanities. It directs the task force to submit a report within 60 days with proposed locations and other options for creating the site.

The order indicates that the future garden would feature more Americans than the ones Mr. Trump specifically named, offering mostly conventional categories for inclusion such as military heroes, entrepreneurs, astronauts, recipients of the Medal of Honor or Presidential Medal of Freedom, religious and labor leaders, “advocates for the poor and disadvantaged,” and “authors, intellectuals, artists, and teachers.”

The order also identifies as “historically significant” Americans “opponents of national socialism or international socialism” as well as “police officers and firefighters killed or injured in the line of duty.” “

“None will have lived perfect lives, but all will be worth honoring, remembering, and studying,” Mr. Trump’s order says.

Mr. Trump issued his order after speaking at the Mount Rushmore National Memorial, where he warned that he would be “deploying federal law enforcement” to protect national monuments and prosecute protesters who seek to deface or topple them.

Since the start of mass protests over the killing of George Floyd by a police officer in Minneapolis, protesters have toppled several statues to confederate generals and leaders, but in some instances have also spray painted or otherwise vandalized monuments to national icons like George Washington and Abraham Lincoln. 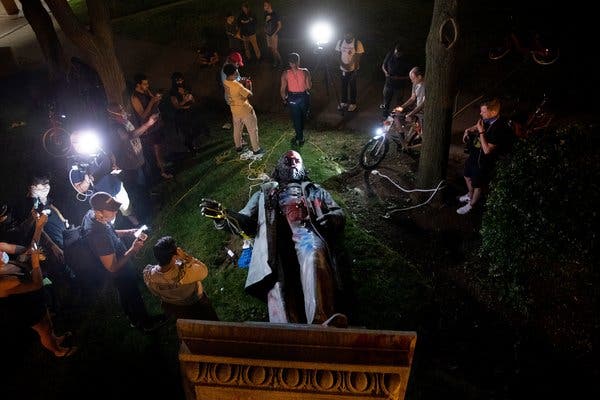 Mr. Trump angrily denounced such actions on Friday night, issuing a broader defense of American heritage against what he called “angry mobs” directed by radical leftists “trying to tear down statues of our Founders, deface our most sacred memorials, and unleash a wave of violent crime in our cities.”

His executive order added that “America owes its present greatness to its past sacrifices. Because the past is always at risk of being forgotten, monuments will always be needed to honor those who came before.”

Mr. Gaines said the order “proposes a redundant trial balloon with just enough examples of notable African-Americans and women to promote a mythic, racist authoritarian view of the past that glorifies white settler violence.

“What most people of conscience would acknowledge as tragic aspects of the past — the stolen lands of Indian nations and the stolen lives and labor of enslaved Africans — Trump evidently wants us to celebrate,” he added.