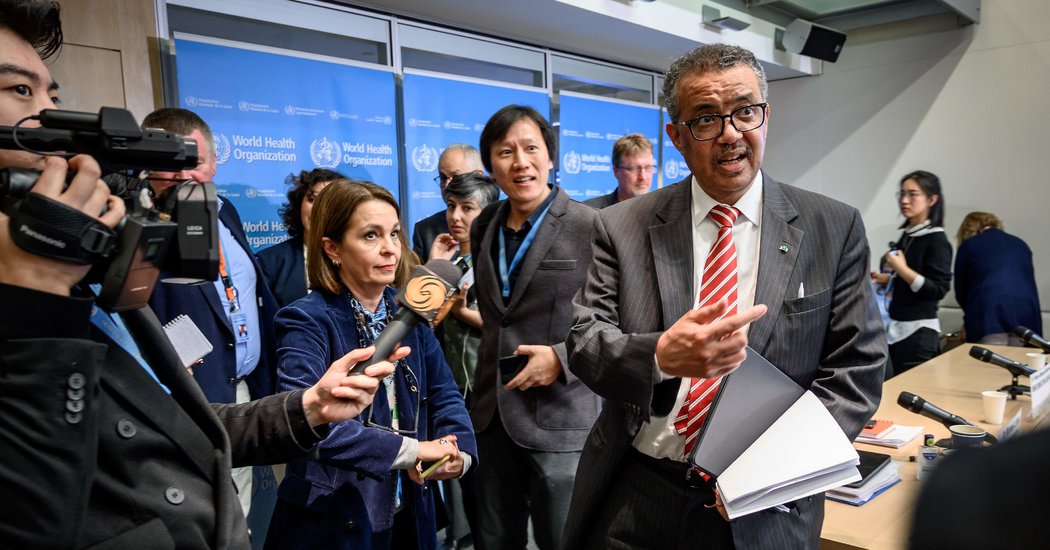 President Trump unleashed a tirade against the World Health Organization on Tuesday, accusing it of acting too slowly to sound the alarm about the coronavirus. It was not the first time in this pandemic that the global health body has faced such criticism.

Government officials, health experts and analysts have in recent weeks raised concerns about how the organization has responded to the outbreak.

In Japan, Taro Aso, the deputy prime minister and finance minister, recently noted that some people have started referring to the World Health Organization as the “Chinese Health Organization” because of what he described as its close ties to Beijing. Taiwanese officials say the W.H.O. ignored its early warnings about the virus because China refuses to allow Taiwan, a self-governing island it claims as its territory, to become a member.

Critics say the W.H.O. has been too trusting of the Chinese government, which initially tried to conceal the outbreak in Wuhan. Others have faulted the organization and its leader, Dr. Tedros Adhanom Ghebreyesus, for moving too slowly in declaring a global health emergency.

The W.H.O., a United Nations agency, has defended its response, saying on Wednesday it alerted the world to the threat posed by the virus in a timely manner and that it was “committed to ensuring all member states are able to respond effectively to this pandemic.”

The agency’s defenders say its powers over any individual government are limited, and that it has done the best it can in dealing with a public health threat with few precedents in history.

Here’s why the W.H.O. is coming under attack.

The W.H.O. has not pushed China on early missteps.

When cases of a mysterious viral pneumonia first appeared in Wuhan in December, Chinese health officials silenced whistle-blowers and repeatedly played down the severity of the outbreak.

Even as late as mid-January, as the virus spread beyond China’s borders, Chinese officials described it as “preventable and controllable” and said there was no evidence it could be transmitted between humans on a broad scale.

The W.H.O. endorsed the government’s claims, saying in mid-January, for example, that human-to-human transmission had not been proven.

Critics say the organization’s repeated deference to Beijing exacerbated the spread of the disease. A group of international experts was not allowed to visit Wuhan until mid-February.

“They could have been more forceful, especially in the initial stages in the crisis when there was a cover-up and there was inaction,” said Yanzhong Huang, a global health expert specializing in China at Seton Hall University.

Mr. Huang noted that during the SARS epidemic in 2002 and 2003, which killed more than 700 people worldwide, the W.H.O. pushed the Chinese government to be more transparent by publicly criticizing it for trying to conceal the outbreak.

At one point during the SARS epidemic, officials at hospitals in Beijing forced SARS patients into ambulances and drove them around to avoid their being seen by a visiting delegation of W.H.O. experts, according to reports at the time.

Even as the virus spread to more than half a dozen countries and forced China to place parts of Hubei Province under lockdown in late January, the W.H.O. was reluctant to declare it a global health emergency.

W.H.O. officials said at the time that a committee that discussed the epidemic was divided on the question of whether to call it an emergency, but concluded that it was too early. One official added that they weighed the impact such a declaration might have on the people of China.

After the United States announced a ban on most foreign nationals who had recently visited China, the W.H.O. again seemed to show deference to Chinese officials, saying that travel restrictions were unnecessary. The group officially called the spread of the coronavirus a pandemic on March 11.

Some experts argue that the institution’s delay in making such declarations deprived other countries of valuable time to prepare hospitals for an influx of patients.

“It reinforced the reluctance to take early strong measures before the catastrophe had actually landed on other shores,” said François Godement, senior adviser for Asia at Institut Montaigne, a nonprofit group in Paris. “The W.H.O.’s tardiness or reluctance to call out the problem in full helped those who wanted to delay difficult decisions.”

The W.H.O. defended its actions, saying on Wednesday that it had “alerted member states to the significant risks and consequences of Covid-19 and provided them with a continuous flow of information” ever since Chinese officials first reported the outbreak on Dec. 31.

China’s influence at the W.H.O. is growing.

China’s leader, Xi Jinping, has made it a priority to strengthen Beijing’s clout at international institutions, including the W.H.O., seeing the American-dominated global order as an impediment to his country’s rise as a superpower.

China contributes only a small fraction of the W.H.O.’s $6 billion budget, while the United States is one of its main benefactors. But in recent years, Beijing has worked in other ways to expand its influence at the organization.

The government has lobbied the W.H.O. to promote traditional Chinese medicine, which Mr. Xi has worked to harness as a source of national pride and deployed as a soft-power tool in developing countries, despite skepticism from some scientists about its effectiveness.

Last year, the W.H.O. offered an endorsement of traditional Chinese medicine, including it in its influential medical compendium. The move was roundly criticized by animal rights activists, who argued that it could contribute to a surge in illegal trafficking of wildlife whose parts are used in Chinese remedies.

China has sought to promote traditional Chinese medicine in the treatment of symptoms of the coronavirus both at home and abroad. Last month, the W.H.O. was criticized after it removed a warning against taking traditional herbal remedies to treat the coronavirus from its websites in mainland China.

China’s role at the W.H.O. will probably continue to grow in the coming years, especially if Western governments retreat from the organization, as Mr. Trump has threatened.

“This is part of China’s efforts to more actively engage in international institutions,” said Mr. Huang, the global health expert. “It will not please every country or every actor, but it’s going to affect the agenda of the W.H.O.”