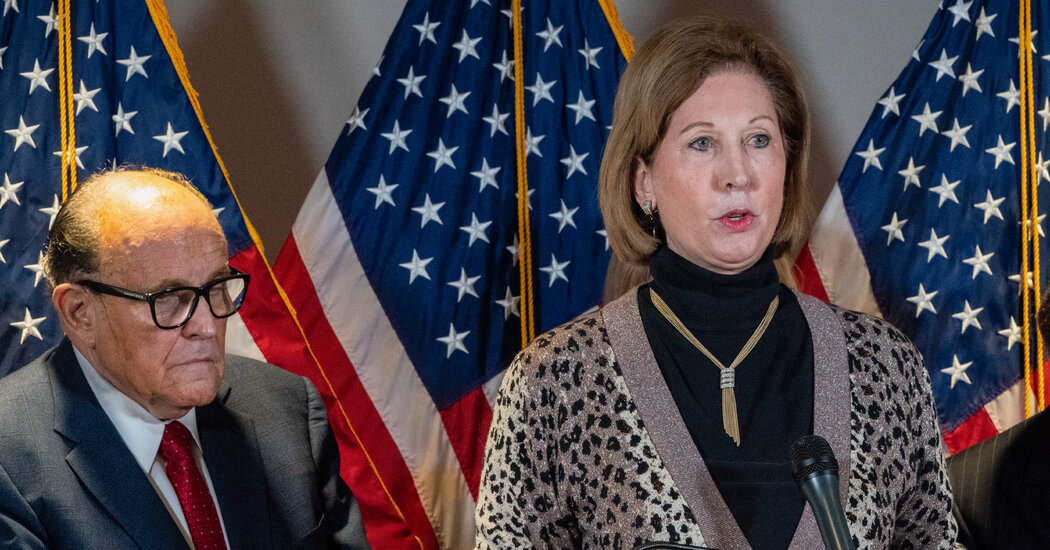 President Trump’s campaign on Sunday disavowed Sidney Powell, one of his lawyers who has pushed false claims of voter fraud, after she made wild accusations that Republican officials had been involved in a payoff scheme to manipulate voting machines.

The repudiation of Ms. Powell, which came at the hands of former allies like Rudolph W. Giuliani, added unwanted drama for the president’s legal team at a moment when it is losing case after case, offering a public window into the chaotic nature and amateurish tactics of most of its attempts so far to fight the election outcome.

Even as many campaign aides, White House advisers and professional lawyers want nothing to do with the claims, a small group of lawyers for Mr. Trump’s campaign has presided over a widely mocked, circuslike legal effort to try to invalidate votes and prevent states from certifying their results.

People like Ms. Powell and Mr. Giuliani have been frequent guests on conservative news programs, where they have made spurious claims that have been rejected by judges or that the Trump campaign has refrained from echoing in court because they lack evidence.

Ms. Powell, who was not directly involved in cases the Trump campaign filed in court, appeared with its legal team at a news conference just last week, and had been embraced by the president and many of his allies because of her emphatic and unconditional defense of an array of baseless claims.

On Sunday, though, the Trump campaign reversed course.

“Sidney Powell is practicing law on her own,” it said in a statement. “She is not a member of the Trump legal team. She is also not a lawyer for the president in his personal capacity.”

In a statement issued to CBS News, Ms. Powell said that she understood the statement from Mr. Giuliani and Jenna Ellis, another Trump lawyer, and that she would still be filing a lawsuit related to her unsubstantiated allegations of voter fraud.

The disavowal came a day after a Pennsylvania judge eviscerated arguments that other members of Mr. Trump’s legal team had made in court that millions of votes in the state should be invalidated.

Ms. Powell was described as a member of the legal team’s “elite strike force” at the news conference on Thursday as she laid out an elaborate conspiracy theory about efforts by the former Venezuelan president Hugo Chávez, who died in 2013, to essentially rig elections in the United States by using voting machines made by Dominion Voting Systems. While Mr. Trump has become obsessed with the idea of a global conspiracy, cybersecurity officials from his own government have said there is no evidence that machines were compromised.

Appearing on the conservative network Newsmax on Saturday night, Ms. Powell further pushed the conspiracy theory, saying that two top Republicans in Georgia — Gov. Brian Kemp and Secretary of State Brad Raffensperger — were taking payoffs as part of the scheme, and that Representative Doug Collins of Georgia had in fact won his race for Senate against Senator Kelly Loeffler. (He did not; Ms. Loeffler’s race is heading to a runoff without Mr. Collins.) Ms. Powell said she planned to file a “biblical” suit in the state.

Two runoff elections in Georgia on Jan. 5 are set to determine which party controls the Senate, and Republicans have grown anxious that the Trump campaign’s legal efforts there could affect those races, which are likely to have lower turnout than this month’s general election.

Ms. Powell’s claims were widely derided, including by some Trump allies. Chris Christie, the Republican former governor of New Jersey, said on ABC’s “This Week” that the legal team had become a “national embarrassment.” Most of the president’s other lawyers have declined to become involved in his efforts to delay certifying the vote in states.

Mr. Trump has been agitated about Mr. Giuliani and Ms. Powell for a few days, advisers said, complaining about how Ms. Powell had sounded at the Thursday news conference, how black rivulets of liquid had dripped down Mr. Giuliani’s face, and about how long the appearance had stretched on.

On Saturday and Sunday, several of the president’s advisers urged Mr. Trump to part ways with Ms. Powell, people briefed on the discussions said. One of those people said that even Mr. Giuliani had recognized that she had gone too far.

But Ms. Powell also made an easy target for deflection by Mr. Giuliani and others, as Mr. Trump vented his frustrations about the Pennsylvania judge’s scathing ruling.

Other lawyers for Mr. Trump who have largely stayed out of the fray believe Mr. Giuliani and Ms. Powell have merely been telling the president what he wants to hear. The president latched onto Ms. Powell’s claims about votes being switched on Dominion machines in the last two weeks.

The thrust of Ms. Powell’s conspiracy theory — that a powerful and vast network of Mr. Trump’s enemies cheated him out of victory — has been largely constant, though the cast of perpetrators and accomplices has varied from setting to setting.

In an interview last week on Rush Limbaugh’s radio show, where she spoke with few interruptions for nearly 20 minutes, Ms. Powell claimed that the voting machines in question had been designed to rig elections.

The day before, on Fox Business, Ms. Powell said the conspiracy involved “dead people” who had voted “in massive numbers” — again offering no evidence — and claimed that fraudulent paper ballots were also part of the scheme.

In September, Ms. Powell acknowledged during a hearing in Federal District Court in Washington that she had taken the highly unusual step of briefing Mr. Trump on the case of one of her most prominent clients, Michael T. Flynn, Mr. Trump’s former national security adviser.

The cold shoulder extended to Ms. Powell was only the latest embarrassment for Mr. Trump’s legal team, for which more than 30 lawsuits challenging the integrity of the election have either been dismissed or voluntarily withdrawn in a half-dozen battleground states.

A major loss came in Pennsylvania on Saturday night, when the federal judge, Matthew W. Brann, threw out a lawsuit seeking to stop the certification of the state’s election results and criticized it in blistering language, likening its argument to “Frankenstein’s monster” and saying it was “unsupported by the evidence.”