A day after claiming he didn’t mean to suggest that law enforcement officials should shoot people who were part of the unrest in Minnesota, President Trump said on Saturday that the Secret Service had been prepared to sic the “most vicious dogs” on protesters outside the White House gates on Friday night.

“Great job last night at the White House by the U.S. @SecretService,” Mr. Trump tweeted in a string of four posts on Saturday. “They were not only totally professional, but very cool. I was inside, watched every move, and couldn’t have felt more safe.”

He continued that the Secret Service allowed the protesters to “scream & rant as much as they wanted” and only acted when “someone got too frisky or out of line.”

“The front line was replaced with fresh agents, like magic,” he added. “Big crowd, professionally organized, but nobody came close to breaching the fence. If they had they would have been greeted with the most vicious dogs, and most ominous weapons, I have ever seen. That’s when people would have been really badly hurt, at least.”

Mr. Trump claimed that Secret Service agents told him they were clamoring for engagement with the protesters. “We put the young ones on the front line, sir, they love it, and good practice,” he claimed he had been told.

He also appeared to invite his own supporters to amass outside the White House on Saturday to counter the protesters, despite a ban against gatherings of more than 10 people in effect in Washington amid the coronavirus pandemic.

“Tonight, I understand, is MAGA NIGHT AT THE WHITE HOUSE???” he tweeted.

Mr. Trump’s renewed threat of violence against the protesters came as protests erupted in cities across the country.

And it came a day after he tweeted — and then tried to walk back — that “when the looting starts, the shooting starts” in response to protests in Minneapolis against the killing of George Floyd, an unarmed black man, at the hands of a white police officer.

That phrase was used in 1967 by a Miami police chief in reference to crackdowns on young black men. The chief, Walter Headley, accused the men of operating under the cover of the civil rights movement and said his police force didn’t mind being accused of police brutality.

Mr. Trump waited nearly 14 hours to try to walk that statement back, claiming he had meant that when people loot, they then sometimes fire guns as well. And in remarks at a late afternoon event at the White House, Mr. Trump conceded that some of the protesters had legitimate grievances.

Mr. Trump traveled to Florida on Saturday for the second time this week to watch SpaceX try to launch a rocket to the International Space Station. The initial launch was scrubbed shortly before it was set to take place on Wednesday.

Talking to reporters as he left the White House, Mr. Trump was asked about his tweet that seemed to invite his own supporters to rally outside the White House. As he often does, Mr. Trump distanced himself from his own statements, saying he was merely asking a question and that he didn’t know if people were coming. He claimed not to be trying to stoke racial strife. 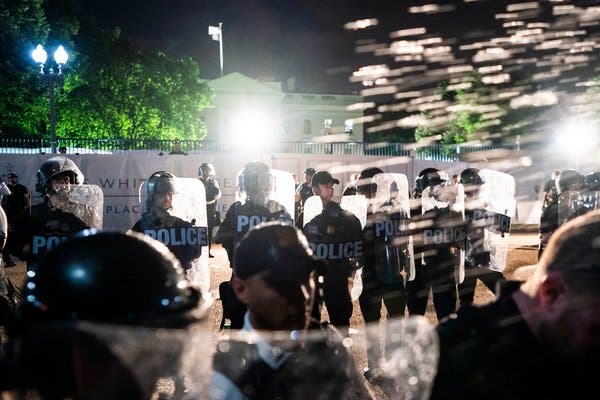 “By the way, they love African-American people, they love black people,” Mr. Trump volunteered, unprompted, describing his own supporters, who are overwhelmingly white.

He reiterated his condemnation of Minnesota’s governor and the mayor of Minneapolis, both Democrats, painting the matter in starkly political terms as his opposition to “liberal” activists.

He again raised the prospect of sending in the military to quell the unrest.

“We could have troops on the ground very quickly if they ever want our military,” Mr. Trump said.

At Mr. Trump’s behest, the Defense Department ordered the Army to prepare active-duty military police units to deploy from several army bases to Minneapolis. The move does not mean that the units will be activated, but it is a first step toward doing so, officials said.