Donald Trump has thrown an extraordinary temper tantrum on live television, lambasting a reporter who challenged him for raising hopes about a coronavirus treatment.

Peter Alexander, White House correspondent at NBC News, asked the US president: “What do you say to Americans, who are watching you right now, who are scared?”

The outburst came at Friday’s White House coronavirus taskforce briefing, at which Trump announced a restriction on non-essential travel across the US-Mexico border as well as stricter controls on undocumented migrants.

The president – who repeatedly downplayed the threat early in the global outbreak – has this week been hyping an anti-malarial drug, chloroquine, as a possible therapeutic treatment.

“It may work, it may not work,” he said on Friday. “I feel good about it. It’s just a feeling. I’m a smart guy … We have nothing to lose. You know the expression, ‘What the hell do you have to lose?’”

This was originally his campaign pitch to African Americans.

Yet Trump’s “feeling”, on which he so often relies, was confronted by science when Dr Anthony Fauci, director of the National Institute of Allergy and Infectious Diseases, cautioned that evidence of chloroquine’s benefits against coronavirus is “anecdotal” and it should not be viewed as a miracle cure.

“Fundamentally, I think it probably is going to be safe, but I like to prove things first,” Fauci said.

Alexander asked the president: “Is it possible that your impulse to put a positive spin on things may be giving Americans a false sense of hope?”

The president retorted: “No I don’t think so … It may work, it may not work. I feel good about it. That’s all it is, it’s a feeling.”

It was then Alexander asked for Trump’s message to people who are feeling scared and the president snapped: “I say that you’re a terrible reporter.”

He added: “You’re doing sensationalism … That’s really bad reporting. You ought to get back to reporting.”

Trump claimed, “I’ve been right a lot,” and barked at Alexander: “You ought to be ashamed of yourself.”

Other correspondents asked Trump why he was assailing a reporter during a national crisis.

Trump replied: “I think Peter is – you know, I’ve dealt with Peter for a long time. And I think Peter is not a good journalist when it comes to fairness. This is the time to come together. But coming together is much harder when we have dishonest journalists.”

Mike Pompeo, the secretary of state, was asked what message such criticism sends to the rest of the world. He merely echoed his boss’s dissatisfaction with the media. He also joined Trump in using the phrase “Chinese virus”.

Introducing Pompeo, Trump referred to “the deep state department”, referring to a favourite conspiracy theory which holds that a network of bureaucrats and intelligence officials exists to frustrate the president’s agenda, but which Steve Bannon, who has promoted the theory, has said is for “nut cases”. 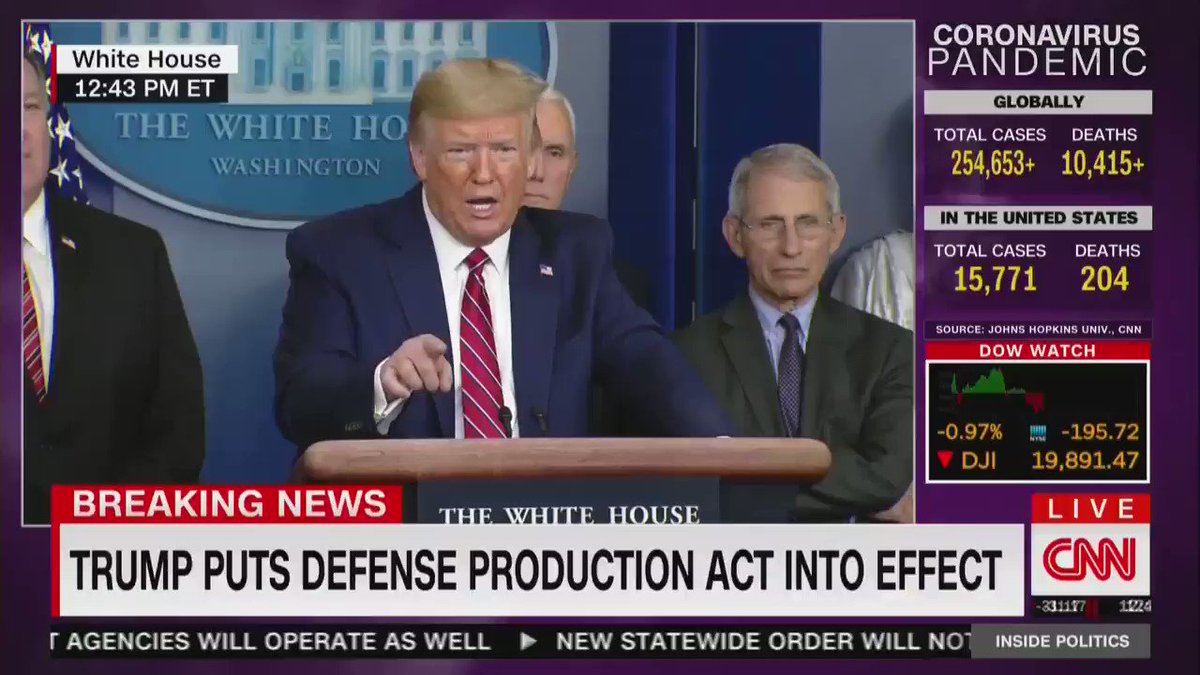 On the podium, Dr Fauci glanced at the president, smiled ruefully, brushed his brow and rubbed his jaw in thought.

Adding to the strange atmosphere, Sean Spicer, the former White House press secretary, was sitting in the briefing room in a seat normally occupied by the Guardian and asked a couple of questions. Trump’s daughter and senior adviser, Ivanka, was also looking on after testing negative for the virus.

Pompeo spoke about the new restrictions on the US-Mexico border, which follows a similar agreement with Canada. He said of Mexico: “Both our countries know the importance of working together to limit the spread of the virus and ensuring the commerce that supports our economy continues to keep flowing.”

The US, Mexico and Canada have agreed that anyone who tries to illegally cross a border will immediately be returned to their native country.

Officials said asylum seekers would not be held in a US facility nor be given due process, because of the health risk to other migrants and border patrol agents. They would instead be returned to Canada, Mexico or their country of origin.

Trump, who has long touted a border wall, said: “Every week our border agents encounter thousands of unscreened, unvetted and unauthorised entries from dozens of countries. We’ve had this problem for decades. You know the story. But now with the national emergencies and all of the other things that we’ve declared, we can actually do something about it.

“We’re taking a very strong hold of that. We have before but this is now at a level that nobody’s ever approached. In normal times these massive flows place a vast burden on our healthcare system but, during a global pandemic, they threaten to create a perfect storm that would spread the infection to our border agents, migrants and the public at large.”

Amid some confusion, the president confirmed that he had put the Defense Production Act “into gear”, to mandate the production of masks and ventilators.

“We have millions of masks which are coming and which will be distributed to the states,” he said. “… They will be here soon. We’re having them shipped directly to states.”

Trump also announced a waive on all interest on federal-held student loans – which he said would “make a lot of students very happy” – and noted that the US treasury had postponed the tax filing date to 15 July.