WASHINGTON — As President Trump’s motorcade pulled into his golf club in Virginia on an overcast Sunday, a small group of protesters waited outside the entrance. One held up a sign.

Mr. Trump and his advisers have said that he does, but he has made scant effort to demonstrate it this Memorial Day weekend. He finally ordered flags lowered to half-staff at the White House only after being badgered to do so by his critics and otherwise took no public notice as the American death toll from the coronavirus pandemic approached a staggering 100,000.

While the country neared six digits of death, the president who repeatedly criticized his predecessor for golfing during a crisis spent the weekend on the links for the first time since March. When he was not zipping around on a cart, he was on social media embracing fringe conspiracy theories, amplifying messages from a racist and sexist Twitter account and lobbing playground insults at perceived enemies, including his own former attorney general.

This was a death toll that Mr. Trump once predicted would never be reached. In late February, he said there were only 15 coronavirus cases in the United States, understating even then the actual number, and declared that “the 15 within a couple of days is going to be down to close to zero.” In the annals of the American presidency, it would be hard to recall a more catastrophically wrong prediction. Even after he later acknowledged that it would not be zero, he insisted the death toll would fall “substantially below the 100,000” mark.

As it stands now, the coronavirus has infected 1.6 million and taken so many lives it is as if an entire midsize American city — say Boca Raton, Fla., just to pick an example — simply disappeared. The toll is about to match the 100,000 killed in the United States by the pandemic of 1968 and is closing in on the outbreak of 1957-58, which killed 116,000. At this pace, it will stand as the country’s deadliest public health disaster since the great influenza of 1918-20 — all at the same time the nation confronts the most severe economic collapse since the Great Depression.

Mr. Trump, who has been sharply criticized for a slow and initially ineffective response to the pandemic, focused on Sunday on the more recent progress, looking ahead, not behind. “Cases, numbers and deaths are going down all over the Country!” he exulted on Twitter.

Even that was not completely true. While total new cases nationally have begun declining, hospitalizations outside New York, New Jersey and Connecticut have increased slightly in recent days, as Mr. Trump’s own former Food and Drug Administration commissioner, Dr. Scott Gottlieb, pointed out.

Altogether, cases are falling in 14 states and Washington, D.C., but holding steady in 28 states and Guam while rising in eight states plus Puerto Rico, according to a New York Times database. The American Public Health Association said the 100,000 milestone was a time to reinforce efforts to curb the virus, not abandon them.

“This is both a tragedy and a call to action,” it said in a statement. “Infection rates are slowing overall in the U.S., but with 1.6 million cases across the nation in the past four months, the outbreak is far from over. New hot spots are showing up daily, and rates remain steady in at least 25 states.”

And even that grim total barely begins to scratch the surface of the pain and suffering endured by a country under siege by the worst public health crisis combined with the worst economic crisis in decades.

“It’s a milestone to reflect on the fact that even those who didn’t die got sick, to reflect on the sacrifices people made to stay home, the sacrifices of the health care workers who shouldn’t have had to sacrifice,” said Dr. Tom Frieden, a former director of the Centers for Disease Control and Prevention. “Most importantly, it should lead us to take this seriously. It’s 100,000, but it looks like we’re still at the beginning of this pandemic.”

The White House on Sunday expressed condolences on the president’s behalf. “President Trump’s prayers for comfort and strength are with all of those grieving the loss of a loved one or friend as a result of this unprecedented plague, and his message to this great nation remains one of resilience, hope and optimism,” said Judd Deere, a spokesman.

For the president, the emphasis now is on recovery, not tragedy, as he urges the country to reopen the shuttered economy and return to some form of public life. While he will travel to Baltimore on Monday to mark Memorial Day and pay tribute to fallen troops — and perhaps the virus victims — he was sending a different signal by golfing two days in a row, telling the nation that it was all right to leave home, head to the course, attend church, frolic on the beach and get back to work.

Golfing during a crisis has always proved problematic for presidents. Dwight D. Eisenhower was criticized for playing after the Soviet Union launched Sputnik. George W. Bush gave up golfing during the Iraq war to avoid looking insensitive to the troops and their families. Barack Obama was excoriated for golfing after an American was beheaded by terrorists in the Middle East.

Among those who regularly assailed Mr. Obama for golfing was Mr. Trump — by one count, 27 times. “Can you believe that, with all of the problems and difficulties facing the U.S., President Obama spent the day playing golf,” Mr. Trump wrote in 2014. He was criticizing Mr. Obama for golfing after just two cases of Ebola were confirmed in the United States. “When you’re president you sort of say, like, ‘I’m going to sort of give it up for a couple of years and I’m really going to focus on the job,’” he said on “Fox & Friends.”

Giving up, though, is not Mr. Trump’s style, nor is public mourning. Since the outbreak, he has hosted corporate executives, truck drivers and governors at the White House; toured factories producing medical equipment; and celebrated doctors, nurses and others responding to the virus. He welcomed to the White House several patients who recovered. But he has arranged no event for those who have lost loved ones, nor publicly dwelled on their grief.

He deals with the death count in clinical terms, making forecasts quickly overtaken by reality, then declaring that the new reality is better than it could have been. In effect, he is making a grim political argument, asserting success if the final toll turns out to be anything less than the most extreme 2.2 million fatalities predicted if the country had done nothing at all to respond. 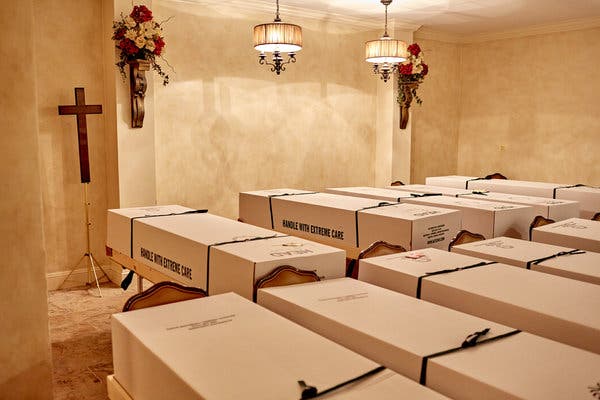 Coffins in a viewing room at a funeral home in Elmhurst, Queens, last month.Credit…Stephen Speranza for The New York Times

At the White House last week, Mr. Trump took credit again for limiting travel from China in early February. “We would have lost millions of lives if we didn’t,” he said. “Think of it: If we lost 100,000 lives, the minimum we would have lost is a million-two, a million-three, a million-five maybe. But take it to a million. So that would mean 10 times more than we lost already.”

Dr. Deborah L. Birx, the White House coronavirus response coordinator, amplified that idea on Sunday, pointing back to projections made at the end of March that the coronavirus would kill 100,000 to 240,000 Americans if lockdowns and social distancing measures were imposed, and that up to 2.2 million Americans would die if nothing was done.

“When we had that first briefing, we talked about 1.2 million to 2.4 million, and 100,000 to 240,000 people succumbing to this incredibly aggressive virus,” Dr. Birx said. “Those are the figures that we continue to stand by.”

Speaking on “Fox News Sunday,” Dr. Birx tried to square those numbers with rosier projections she later made on April 10, when aggressive social distancing measures appeared to be slowing the spread of the virus and she embraced a new projection of 60,000 dead. “There are different models we have been using all along,” she said.

The president’s critics said he would not be able to convince voters this fall that he should be celebrated for a death toll of 100,000 or more just because it could have been worse.

“It’s not the moving of the goal posts on loss of life that hurts Trump as much as the loss of life itself,” said Margie Omero, a Democratic pollster and principal at the firm GBAO. “The facts are what worry people — majorities hold Trump responsible for high death tolls, high unemployment and a lack of testing. And even more now than a month ago.”

Republicans, though, have argued that voters will blame China for not being more forthcoming about the virus and see the rest through the lens of their pre-existing views of Mr. Trump. “Mostly, I think this will wind up falling on our normal partisan lines,” said Scott Jennings, a Republican operative. “If you hate Trump, you won’t find anything he did to be right. If you love Trump, you will find the media and Democratic governors at fault for overhyping and overreacting.”

If the country’s losses were on his mind this weekend, Mr. Trump did a good job of hiding it. His Twitter feed was full of everything but that. He tweeted or retweeted messages falsely implying that “Psycho Joe Scarborough,” the MSNBC host, murdered an aide in 2001; suggesting that Speaker Nancy Pelosi has denture problems and likes to “drink booze on the job”; and declaring that former Attorney General Jeff Sessions “had no courage” and “ran for the hills” by recusing himself from the Russia investigation in 2017 as required by ethics rules.

Mr. Trump reposted eight tweets from John K. Stahl, a conservative who ran unsuccessfully for Congress in California in 2012. Mr. Stahl has a history of racist and sexist posts, especially against black women like Senator Kamala Harris of California (“Willie’s Ho”); Stacey Abrams, the former candidate for governor of Georgia (“Shamu”); and Joy Reid, the MSNBC host (“butt ugly” and a “skank”).

Imperial College London predicted last week that the relaxation of quarantine measures encouraged by Mr. Trump “will lead to resurgence of transmission” and that “deaths over the next two-month period could exceed current cumulative deaths by greater than twofold” — in other words, another 200,000 deaths by August.

As the nation reaches this macabre milestone, that is the grim worry: That it is not the last one. “To me,” Dr. Frieden said, “the most important question is are we going to do what we need to do to prevent the next 100,000?”