WASHINGTON — President Trump, under pressure to take more significant steps to slow the spreading coronavirus, recommended on Monday that Americans stop unnecessary travel and avoid bars, restaurants and groups of more than 10 people, as he warned that the outbreak could extend well into the summer.

The national guidelines, which also advise home-schooling and the curtailing of visits to nursing homes and long-term care facilities, are the most robust response so far from the Trump administration. But the guidelines, which officials described as a trial set, are not mandatory and fall short of a national quarantine and internal travel restrictions, which many health officials had urged.

And they do not reflect the urgency of actions taken around the world as governments in Italy, France, Spain and elsewhere began imposing stringent lockdowns on citizens. Even within the United States, local governments were imposing shelter-at-home orders and police-enforced quarantine zones.

“So it seems to me that if we do a really good job, we’ll not only hold the death down to a level that is much lower than the other way had we not done a good job,” Mr. Trump said, “but people are talking about July, August, something like that.”

Flanked by members of his task force, including Dr. Anthony S. Fauci, the director of the National Institute of Allergy and Infectious Diseases, the president assumed a more realistic tone than his weeks of casual optimism and hopes that the virus “will disappear.” He said discussions with governors and public health experts had prompted his administration to “further toughen” the guidelines to contain the virus.

“If everyone makes this change or these critical changes and sacrifices now,” Mr. Trump said, “we will rally together as one nation, and we will defeat the virus, and we’re going to have a big celebration all together.”

Mr. Trump made his announcement as much of the United States was disoriented by the abrupt closure of schools and businesses and the essential emptying of public life. The 2.1 million-strong work force of the federal government was struggling with a confusing patchwork of guidance on whether or not to work from home. Stock prices weathered another brutal day of trading, with the S&P 500 falling nearly 12 percent, and coronavirus infections in the country soared to well over 4,000 — and well over 181,000 globally.

In Chicago, an employee in the Federal Aviation Administration office responsible for airlines at O’Hare International Airport tested positive for the coronavirus, forcing the agency to close an office that performs safety and maintenance inspections at one of the nation’s busiest airports. 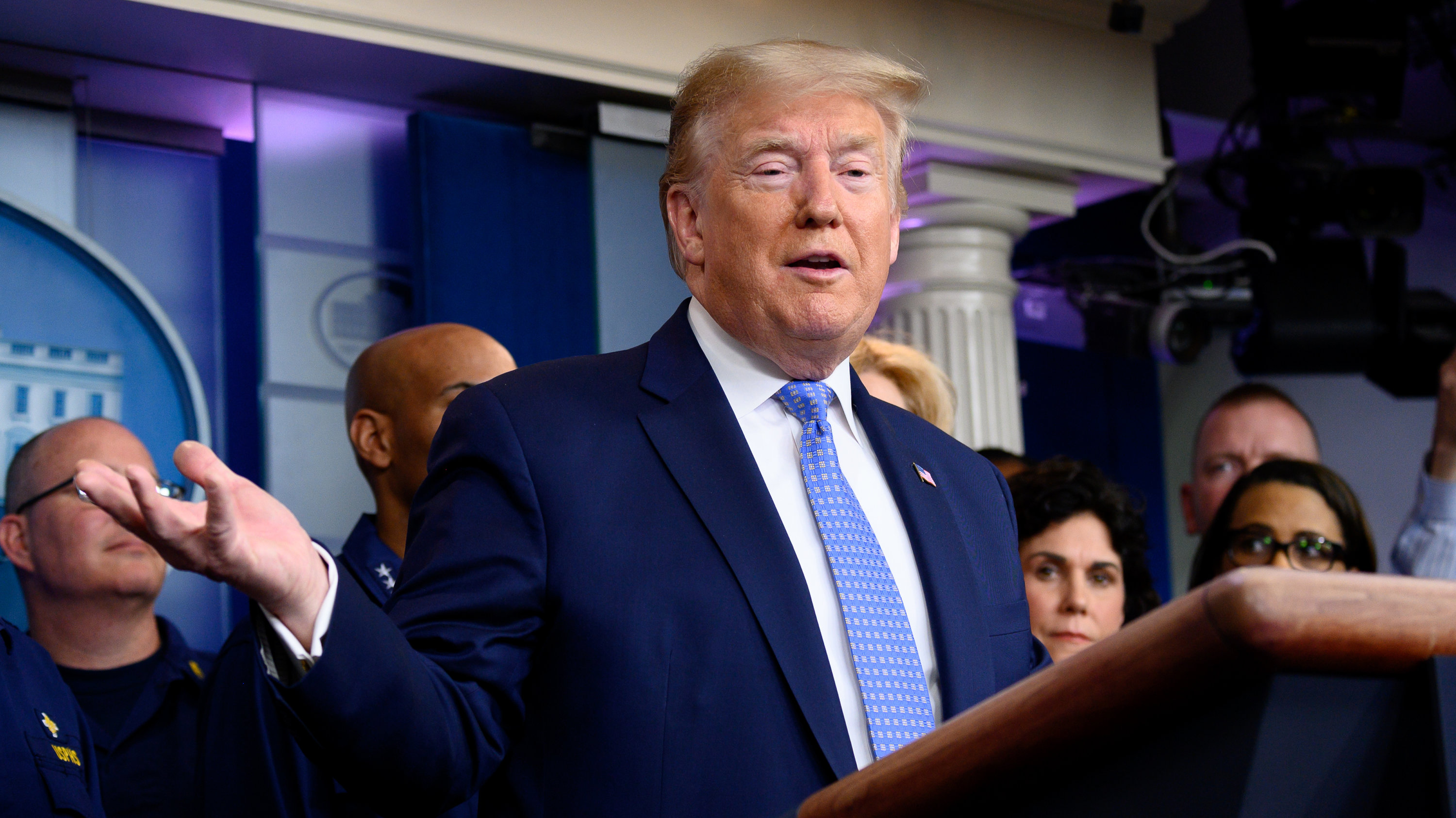 President Trump held a call with governors on Monday about the response to the coronavirus, discussing work on a vaccine, the impact on the economy and more.CreditCredit…Erin Scott for The New York Times

But such realism was the tone of the day. The president’s guidelines appeared to be driven by a new report from London that predicted that without action to stem the spread, the virus could cause more than two million deaths in the United States, and the most effective way to reduce that is to limit interactions among people.

“We are at a critical inflection point in this country, people,” Dr. Jerome Adams, the surgeon general, said on Fox News. “When you look at the projections, there’s every chance that we could be Italy,” where deaths have topped 2,100.

A congressional stimulus package that could cushion the effects of the pandemic hit a snag as lawmakers from both chambers haggled over who could provide a better one.

When asked by reporters if the country was headed for a recession, Mr. Trump remarked, “It may be.”

“We are going to be challenged, no question about it,” Larry Kudlow, the president’s chief economic adviser, told reporters gathered in the White House driveway earlier on Monday. “We have a big challenge.” 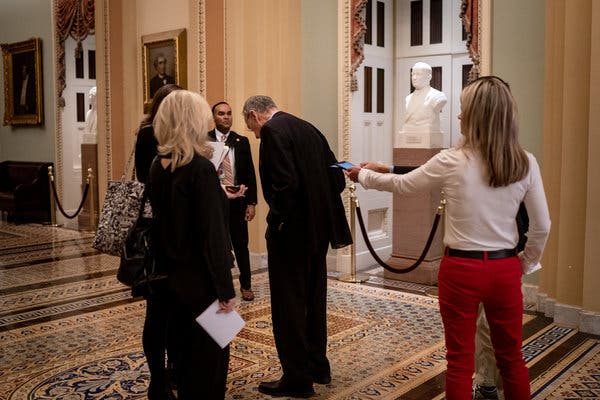 Senator Charles E. Grassley, Republican of Iowa, turning his back to reporters in an attempt at social-distancing on Monday at the Capitol.Credit…Erin Schaff/The New York Times

On Capitol Hill, the lawmakers charged with stanching the economic fallout signaled that a brokered stimulus deal might take longer than planned. The fate of a multibillion dollar emergency relief package that passed the House overwhelmingly early Saturday seemed uncertain as lawmakers and staff rushed to complete a package of technical changes to the legislation on Monday, even as more offices transitioned to working remotely and at least one lawmaker, Representative Ben Ray Luján, Democrat of New Mexico, announced he would self-quarantine.

Shortly after 8 p.m. Monday, the House approved the legislation with its technical changes, using a procedural maneuver that allowed — without the entire chamber present — for the legislation to head to the Senate. Earlier in the day, Representative Louie Gohmert, a Texas Republican with a knack for courting controversy, indicated that he might object to the effort on the grounds that the process was rushed, but ultimately agreed to allow the bill to pass.

It is unclear how quickly the legislation will move in the Senate.

Multiple Republican senators have voiced concerns with the package, particularly provisions that would establish paid sick leave and efforts to help businesses comply with that mandate. Senators and staff have discussed either amending or voting against the proposal, which was largely negotiated between Speaker Nancy Pelosi of California and Steven Mnuchin, the Treasury secretary.

Mr. Trump, who announced his approval for the measure on Twitter late Friday night, appeared to endorse possible Senate changes, telling reporters on Monday, “I think they may make it even better.”

And beyond that, lawmakers were floating ideas for another, even larger economic stimulus package that both parties agreed would most likely be necessary.

Senate Republicans have opened discussions on a follow-on bill to buffer the economy against the coronavirus. The bill could include direct aid like loans or grants for industries such as the airlines. The U.S. Chamber of Commerce called on Monday for Congress to approve loans and loan guarantees for large companies whose business has been disrupted by the virus.

Senator Mitch McConnell, Republican of Kentucky and the majority leader, said that any future legislation would help support families and bolster businesses and the health care system, indicating that he and his lieutenants would take a larger role in drafting another piece of legislation. Senator Chuck Schumer of New York, the Democratic leader, proposed allocating at least $750 billion to provide, among other things, immediate loan payment forbearance, affordable testing and emergency child care funding.

As lawmakers haggled, Mr. Trump was creating problems of his own in his conversation with the governors.

The suggestion that they find their own respirators and ventilators surprised some of them, including those who have been scrambling to contain the outbreak and are increasingly looking to the federal government for help with equipment, personnel and financial aid. Govs. Jay Inslee of Washington, whose state is at the center of the domestic outbreak, and Michelle Lujan Grisham of New Mexico both reacted angrily to the administration’s slow response to the crisis.

“If one state doesn’t get the resources and materials they need, the entire nation continues to be at risk,” Ms. Lujan Grisham said.

A sense of internal frustration from that call seeped into public view as Mr. Trump singled out Gov. Andrew Cuomo, Democrat of New York, in a Twitter post, urging him to “do more.” Mr. Cuomo quickly shot back: “No — YOU have to do something! You’re supposed to be the President.”

Mr. Cuomo is among the governors who have placed sweeping restrictions on public life to slow the spread of the coronavirus. On Monday, he announced that New York would engage the National Guard to find spaces that could quickly be converted into medical facilities.

Also on Monday, Mr. Trump held a teleconference with members of the Group of 7 leading industrial economies. During the meeting, the officials pledged to work together to coordinate on public health measures and to work to restore consumer confidence.

“We, the leaders of the Group of 7, acknowledge that the Covid-19 pandemic is a human tragedy and a global health crisis, which also poses major risks for the world economy,” the group said in a joint statement issued after the meeting. “We are committed to doing whatever is necessary to ensure a strong global response through closer cooperation and enhanced coordination of our efforts.”

But public health officials who have been tracking the spread of the virus admonished countries that have not been doing enough to test citizens. Officials in the Trump administration have been criticized for promising to quickly bolster testing capacity only to walk back earlier assertions.

“For any country, one of the most important things is the political commitment at the highest level,” Dr. Tedros Adhanom Ghebreyesus, the director general of the World Health Organization, said Monday during a news conference. “All countries should be able to test all suspected cases. They cannot fight this pandemic blindfolded; they should know where the cases are.”

The social-distancing effects of the coronavirus could be seen throughout Washington, including at the White House, where for the first time all people entering had their temperatures taken before being allowed in. Employees reporting to work were advised to use one of three designated entrances before submitting to mandatory temperature checks, according to one official. And the first lady, Melania Trump, canceled the annual Easter egg roll.

In the briefing with reporters, Dr. Fauci stressed that some of the White House guidelines were inconvenient, but that they would stop the spread of the virus. He conceded that some would say the government was overreacting, but he was emphatic: this was not an overreaction.

“I’ll say it over and over again,” Dr. Fauci said. “When you’re dealing with an emerging infectious diseases outbreak, you are always behind where you think you are if you think that today reflects where you really are.”

Reporting was contributed by Jonathan Martin, Jim Tankersley and Michael D. Shear from Washington, and Sheri Fink from New York.