Donald Trump has warned that China should face consequences if it was “knowingly responsible” for the coronavirus pandemic, as deaths in Europe from Covid-19 approached 100,000.

“It could have been stopped in China before it started and it wasn’t, and the whole world is suffering because of it,” Trump said in his daily White House briefing, as US cases topped 730,000 and fatalities in the country approached 39,000.

“If it was a mistake, a mistake is a mistake. But if they were knowingly responsible, yeah, I mean, then sure there should be consequences,” Trump said. He did not elaborate on what form that might take.

He said the Chinese were “embarrassed” and the question now was whether what happened with the coronavirus was “a mistake that got out of control, or was it done deliberately?”

Briefing or rally? Trump shifts to campaign mode as he rails against the media

“There’s a big difference between those two,” he said.

On Sunday China reported just 16 new confirmed coronavirus cases, its lowest number since 17 March and down from 27 a day earlier. No new deaths were reported.

During the White House briefing, Trump interrupted his coronavirus response coordinator, Deborah Birx, who was showing a comparison of deaths per 100,000 people in a range of countries, to say he didn’t believe China and Iran’s stated fatalities.

“Does anybody really believe these figures?” he asked. 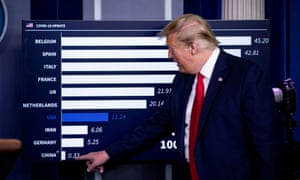 Birx, who has steered clear of political aspects of Trump’s contentious briefings, also questioned China’s data, including that the country’s death rate per 100,000 people was far below major European countries and the US. She called China’s numbers “unrealistic” and said it had a “moral obligation” to provide credible information.

Birx praised European countries, who she said alerted the US to the seriousness of the virus, including its significant impact on people with underlying health symptoms.

Deaths in Europe were expected to pass 100,000 on Sunday – more than 62% of global fatalities from the virus.

In Spain, which has more than 194,00 cases, deaths have passed 20,000 (the third highest after the US and Italy), and the prime minister, Pedro Sanchez, announced on Saturday that the nationwide coronavirus lockdown would be extended by two weeks to 9 May.

“We have done the hardest part through responsibility and social discipline … we are putting the most extreme moments behind us,” Sanchez said.

The restrictions currently in place would however be loosened slightly to allow children time outside from 27 April, said Sanchez. Some businesses were allowed to reopen this week.

But with more than 194,000 reported cases of the virus, Sanchez warned the country that an end to one of Europe’s toughest confinements would be “prudent and progressive”.

And he warned: “If necessary, we will reinforce protective measures again.”

In Italy, which has Europe’s highest death toll at more than 23,000 and infections at 175,000, a church in the northern city of Bergamo that served as a temporary morgue “is finally empty”, the mayor said on Saturday. The government last week extended the country’s lockdown until 3 May, while allowing some businesses to open.

France’s president Emmanuel Macron told the nation last week that the country would start returning to normal life on 11 May, if citizens were “civic, responsible and respected the rules” – and if the number of cases of coronavirus continued to drop. Schools are set to reopen on that date, but the government has yet to spell out when businesses like cafes and cinemas can restart and to to what extent people will be allowed to move around.

France has recorded nearly 153,000 infections and just under 20,000 deaths from the virus. Elsewhere, signs that the outbreak could be easing prompted Denmark and Finland to begin reopening shops and schools this week.

Germany has declared the virus “under control” after 3,400 deaths, and is beginning the delicate task of lifting some restrictions without triggering a secondary outbreak – with some shops allowed to reopen on Monday, and some children returning to school within weeks.