Erin Fangmann grew up in a military family, has been married to a captain in the Air Force for 18 years and has voted Republican all her life, including for Donald J. Trump. But as with a number of other veterans, troops and military family members who have watched the president with alarm, her support has evaporated.

“He has hurt the military,” said Ms. Fangmann, who lives in Arizona, one of several states in play this November with a high percentage of veterans and active-duty service members. “Bringing in active-duty members to the streets was a test to desensitize people to his future use of the military for his personal benefit. I think the silent majority among us is going to swing away.”

Since 2016, Mr. Trump has viewed veterans as a core slice of his base; in that year’s presidential election, about 60 percent voted for him, according to exit polls, and swing-state counties with especially high numbers of veterans helped him win. Many veterans and members of the military stuck with him even as he attacked the Vietnam War record of Senator John McCain, disparaged families of those killed in combat and denigrated generals whom he fired or drove from government service. Some conservative rank-and-file enlisted members silently agreed with Mr. Trump.

But the president’s threat last week to use active-duty troops on American streets against largely peaceful protesters, and his flirtation with invoking the 1807 Insurrection Act, have rattled the military world, from its top leaders to its youngest veterans. If they break in significant numbers, they could carry political weight in key battleground states like Arizona, North Carolina and Ohio.

“I have always been a swing voter,” said Amy Rutkowske, an Army veteran and spouse who lives in North Carolina and is volunteering on a House race, the first time she has ever volunteered in politics. “My fundamental understanding is that the president is the commander in chief and that the office demands respect. But I have never wanted a different commander in chief more.”

Some members of the military — who are not permitted to speak about politics publicly — and their families have been posting critically on social media about the president and policies of his that they once supported. Others, who have never been excited about Mr. Trump as their commander in chief, have begun to speak out, join protests and volunteer for progressive causes.

They say that Mr. Trump has politicized the armed forces — which pride themselves as being above politics and discourage partisan discourse in their ranks — and has threatened the Constitution, both of which they deem as last straws.

Of course, many veterans and military personnel still support Mr. Trump. Quality recent polling on their views is scant, but some have embraced his America-first campaign message, his focus on military spending and his creation of a new Space Force that has been unexpectedly well-received after initial scoffing.

In the 2018 congressional elections, when support for Democrats surged, 58 percent of military voters continued to vote for members of Mr. Trump’s party, according to exit polls. And those who do turn away from the president now will not automatically support his Democratic opponent, Joseph R. Biden Jr.

Martin Sepulveda, a former commander in the United States Navy Reserve who lives in Arizona, said of Mr. Trump, “I can’t support the man.” But he added: “Am I a Biden guy? No. I don’t know what I will do. I have been a registered Republican for years.”

But the recent condemnations of Mr. Trump from high-level military veterans like Jim Mattis, the former defense secretary and a retired four-star Marine Corps general, have in some cases fortified the shifting views among military members. “The Mattis statement has changed people in some amazing ways,” said Chelsea Mark, a Marine veteran in Florida who works for a veteran service organization. “I went on a veteran hike recently, and I saw someone wearing a Donald Trump T-shirt, and that same person this week was posting anti-police-brutality things on her Instagram.” 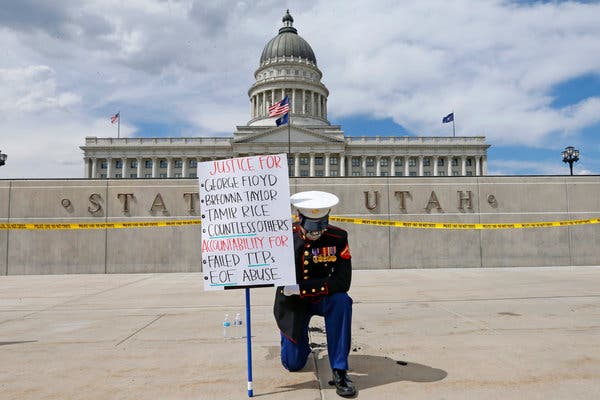 On June 5, the same day the Marines issued a ban on displays of the Confederate battle flag at its installations, a retired Marine in dress uniform stood solo in front of the Utah State Capitol in support of the Black Lives Matter movement, with black duct tape across his mouth that read, “I can’t breathe.”

Mr. Trump’s moves to use the military against American protesters and looters came after several months of other highly unorthodox moves by his administration involving the military, including the clearing of three members of the armed services accused of war crimes; the firing of Capt. Brett E. Crozier after he raised alarms about the coronavirus on the aircraft carrier he commanded; the calling back of West Point students during a pandemic so the president could address them for a graduation, which he is set to do on Saturday; and the diversion of funds from military projects to pay for a border wall, a move that followed the deployment of troops to the border just before the 2018 midterm elections.

“This is the culmination of all those metronomic choices that have intruded into the military chain of command and culture,” said Kori N. Schake, the director of foreign and defense policy studies at the American Enterprise Institute, who served as a foreign policy adviser on Mr. McCain’s 2008 presidential campaign. “I do think it is likely to chip away among veterans, just as I believe it will chip away at support with Republicans more broadly.”

Mr. Trump’s ordering of the killing of a top Iranian general, which briefly appeared to bring the United States to the edge of war with Iran early this year, was a disappointment to the many veterans and service members who had supported him in part for his promise to end American involvement in overseas conflicts.

“The news of wanting to deploy the military domestically has caused a huge sense of outrage among most families I know,” said Sarah Streyder, the director of the Secure Families Initiative, a group that calls for the withdrawal of troops from abroad. “A lot of military families live on Facebook. Social media is very important for this transient community.”

Numerous military spouses concurred. “From what I see from my friends communicating online, spouses have grown much more vocal in opposition to policies,” said Kate Marsh Lord, a Democrat who is married to a member of the Air Force and lives in Virginia but votes in Ohio. “I have seen more spouses speak out on issues of race and lack of leadership than in my entire 15 years as a military spouse.”

Kate Marsh Lord and her children have marched and joined peaceful demonstrations in their neighborhood in Northern Virginia.

Roughly 40 percent of active-duty service people and reserves are people of color, underlining how the current moment has affected military families.

“People took offense that they were using the military to calm peaceful protests by people of color who were out on the streets,” said Jerry Green, who served in the Army until 1998 and now lives in Tampa. “When I saw that whole thing unfold, for me, personally, it was awful. I was really distraught.” Mr. Green, who is black, will not be supporting Mr. Trump, whom he once found interesting, he said.

In North Carolina, Cal Cunningham, a Democrat and a lieutenant colonel in the United States Army Reserve who is challenging Senator Thom Tillis, a Republican, is working to capitalize on the military and veteran vote in his state, where Mr. Trump recently diverted millions of dollars for military installments to pay for a wall at the Mexican border after Congress blocked its funding.

“Cal’s profile as a military veteran is quite powerful in a state with so many veterans and military members,” said Rachel Petri, a spokeswoman for Mr. Cunningham. “Not only in communicating with them, but also with independent and swing voters who see the military and veterans as part of the state’s DNA.”

Other Democratic groups around the nation are also seeking leverage with the military vote. “We believe that Trump’s support within the military, with military families and with veterans, is soft and receding,” said Jon Soltz, a founder of VoteVets, which has been increasingly successful in electing Democratic veterans. “Our plan for the fall is simple: We’re putting together the most comprehensive data-driven veteran and military family get-out-the-vote operation the Democratic Party has ever seen, and we will deploy it to ensure Donald Trump is a one-term president.”