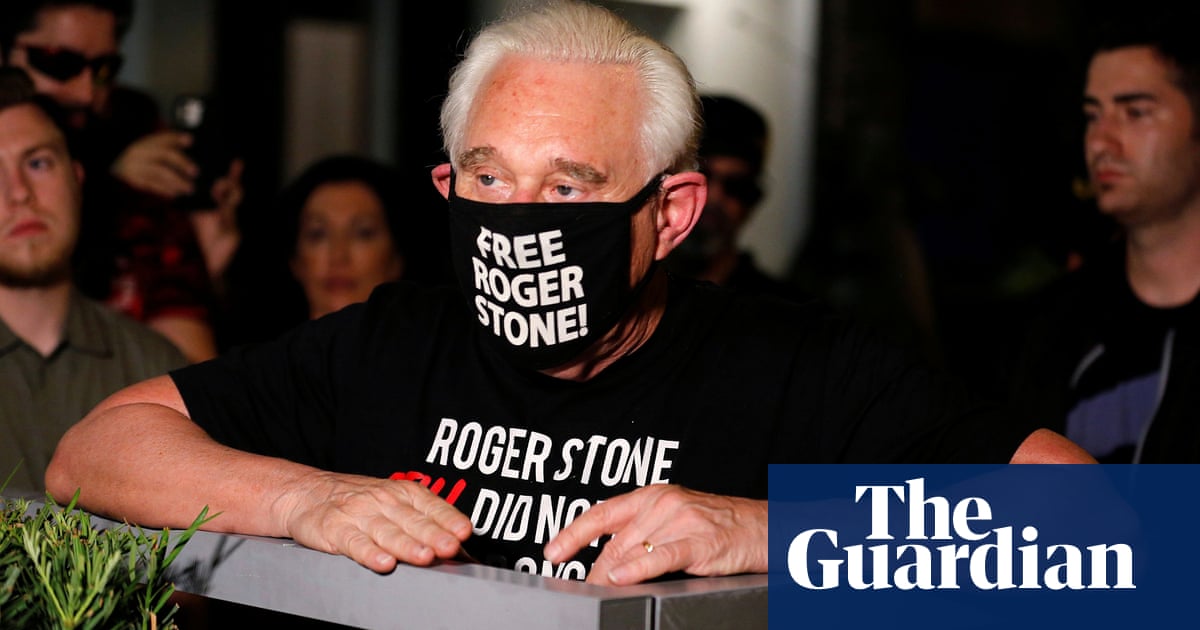 Outrage is growing among opponents of Donald Trump’s decision to commute the prison sentence of his longtime friend and notorious Republican fixer Roger Stone despite the US attorney general having declared Stone’s conviction “righteous”.

Criticism on Saturday came from both sides of the political aisle.

Adam Schiff, a California Democrat and chairmen of the House intelligence committee – the congressional panel Stone was convicted of lying to about aspects of the Trump-Russia investigation – called the decision “destructive of the criminal justice system and the rule of law” on Saturday morning.

Unprecedented, historic corruption: an American president commutes the sentence of a person convicted by a jury of lying to shield that very president.

Trump commuted the sentence of Stone on Friday night. He was a former campaign adviser to the president and was due on Tuesday to begin a sentence of three years and four months in jail.

Stone, 67, was convicted in November 2019 of obstructing a congressional investigation into whether the Trump campaign colluded with Russia to win the 2016 election.

Trump said that Stone was targeted in an “illegal witch-hunt”, prompting the global politics professor and political columnist Brian Klass to tweet on Saturday: “This is a complete lie. Roger Stone committed a series of well-documented crimes that are not seriously contested.”

He added: “This is what despots do: wield the law like a weapon to attack political opponents and protect loyal cronies. It’s a disgraceful, dark day for American democracy.”

Stone was convicted in November 2019 of seven crimes, including obstruction of justice, lying to Congress and witness tampering in the congressional investigation into Russian interference in the 2016 presidential election.

Stone had boasted during the 2016 campaign that he was in contact with the WikiLeaks founder, Julian Assange, through a trusted intermediary and hinted at inside knowledge of WikiLeaks’ plans to release more than 19,000 emails hacked from the servers of the Democratic National Committee.

Stone did not take the stand during his trial, did not speak at his sentencing, and his lawyers did not call any witnesses in his defense.

In a statement released on Friday evening, a White House statement said: “Roger Stone has already suffered greatly. He was treated very unfairly, as were many others in this case. Roger Stone is now a free man!”

The commutation does not erase Stone’s felony convictions the way a pardon would, but it allows Stone to avoid setting foot in prison for his crimes.

A presidential pardon would have acknowledged Stone’s guilt, while Trump has been encouraging Stone to fight his conviction.

Romney has not been joined by a rush of other Republicans criticizing Trump, however. The South Carolina Senator Lindsey Graham, a staunch Trump ally these days, has said the commutation was justified.

Romney is likely to be the only GOP lawmaker to express any version of this sentiment. Most have said nothing and Graham yesterday said commutation was totally justified because Stone was nonviolent and in his 70s (he’s 67). https://t.co/ZqqqHgozEb

Meanwhile, Schiff continued, in an interview on NBC on Saturday morning: “If you lie for the president, if you cover up for the president … you get a pass from Donald Trump. That’s the message.”

He continued that the decision showed there were two rules of law, “one for the cronies of Donald Trump, one for everyone else” and that the president’s signal was that ‘it’s OK to lie to Congress as long as it’s to protect me.’ That can never be OK.”

On Friday night, the speaker of the House, Nancy Pelosi, another California Democrat, told CNN that there should be legislation to make it illegal for a president to pardon someone if “the crime that they are in jail for was caused by protecting the president”.

That is unlikely to happen, and Trump hasn’t pardoned Stone. The constitution gives the president full pardon power over individuals.