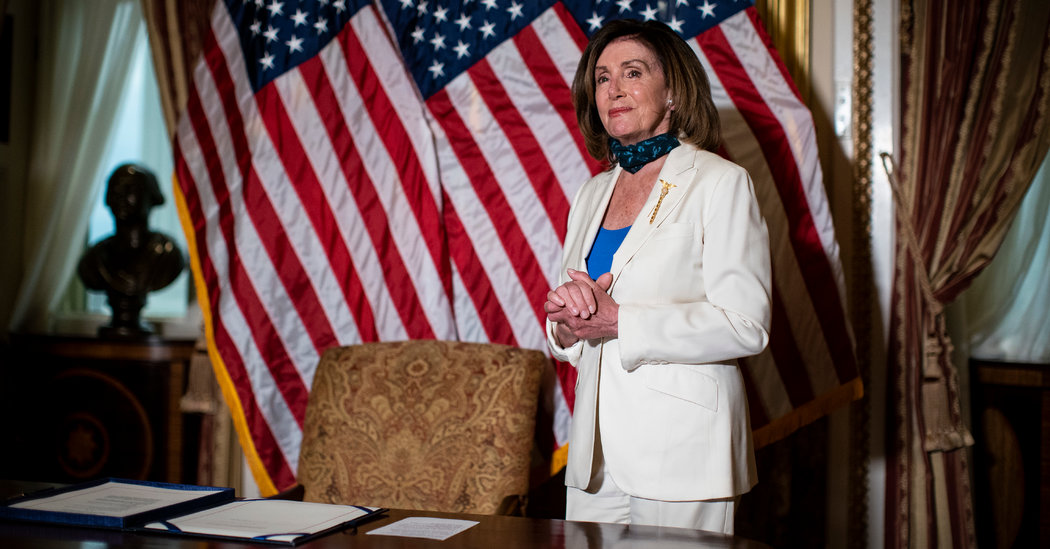 WASHINGTON — Democratic leaders in Congress and a pair of Republicans on Tuesday condemned President Trump for his response to protests around the country and in the capital, the day after peaceful demonstrators were gassed in front of the White House so he could pose for a photograph with a Bible.

The rare bipartisan rebukes reflected a broad sense of alarm at the president’s behavior as protests of police violence and racial discrimination reach a boiling point throughout the country. They followed a remarkable spectacle that unfolded Monday evening, when the police fired flash-bang explosions and tear gas and used officers on horseback to drive away peaceful protesters as Mr. Trump appeared in the Rose Garden and threatened to send the United States military into states where governors could not bring protests under control.

He then left the White House and, with Attorney General William P. Barr and other aides, crossed a park that had been cleared of demonstrators to have his picture taken holding the Bible outside a historic church that had been vandalized in the unrest.

“After the president’s reality show ended last night, while the nation nervously watched the chaos that engulfs us, President Trump probably laid in bed pleased with himself for descending another rung on the dictatorial ladder,” Senator Chuck Schumer of New York, the Democratic leader, said on the Senate floor on Tuesday morning. “He probably wore out his remote control watching the clips of General Barr’s victory over the unarmed in the battle of Lafayette Square.”

On the other side of the Capitol, wielding her own Bible and quoting from the Book of Ecclesiastes, Speaker Nancy Pelosi urged the president to focus on “a time to heal,” adding that the aggressive scene that played out in Washington on Monday had “no place” in the nation’s capital.

“We would hope that the president of the United States would follow the lead of so many other presidents and be a healer in chief,” Ms. Pelosi said, “and not a fanner of the flame.”

Their comments reflected a building sense of outrage at Mr. Trump among Democrats, who are pressing for quick action to address the excessive use of force and the killings of unarmed black Americans by the police.

But at least two Republicans joined in the criticism of the president’s actions as well.

“There is no right to riot, no right to destroy others’ property and no right to throw rocks at police,” Senator Ben Sasse, Republican of Nebraska, said in a statement. “But there is a fundamental — a constitutional — right to protest, and I’m against clearing out a peaceful protest for a photo op that treats the word of God as a political prop.”

His comments echoed those of Senator Tim Scott of South Carolina, the only black Republican in the Senate, who denounced the move in unequivocal terms during an event hosted by Politico.

“If your question is, ‘Should you use tear gas to clear a path so the president can go have a photo op?’ the answer is no,” Mr. Scott said.

But when Democrats moved to officially condemn Mr. Trump for the move, offering a symbolic resolution that also affirmed the rights of Americans to peacefully assemble and denounced rioters and looters, Republicans blocked the effort.

Senator Mitch McConnell, Republican of Kentucky and the majority leader, said he objected because the resolution addressed neither justice for black Americans or “peace for our country in the face of looting.”

“Instead, it just indulges in the myopic obsession with President Trump that has come to define the Democratic side,” Mr. McConnell said.

Mr. McConnell then tried to pass his own resolution to condemn a long pattern of unjust police violence against black Americans, praise peaceful protesters, and condemn rioting, but Mr. Schumer objected, calling it insufficient because it failed to denounce Mr. Trump’s actions.

Many other Republicans refrained entirely on Tuesday from addressing Mr. Trump’s words and actions, and some offered support for the president, noting that protests had grown violent and, in some cases, given way to looting.

“We have to restore order,” Senator Ron Johnson, Republican of Wisconsin, told reporters when asked about the president’s calls for military force. “This can’t go on. So hopefully, you know, the president talking that way will put a little spine in some of these governors that aren’t calling out the National Guard, to the extent that they need to to restore order.”

Mr. Johnson said he had not seen video of the police clearing protesters from outside the White House to make way for Mr. Trump.

Senator John Thune of South Dakota, the second-ranking Republican, said the episode was “in the eye of the beholder.”

He offered a vague critique of Mr. Trump’s idea of inserting the military to rout protesters, saying: “I would prefer that these things be handled by the state and local authorities. You want to de-escalate, rather than escalate.”

Minutes before the scene unfolded on Monday, Mr. Trump had threatened an “overwhelming law enforcement presence until the violence has been quelled.” In the nation’s capital later Monday night, that warning became a reality, as military helicopters flew low over protesters breaking curfew in “show of force displays” and federal law enforcement officials continued to deploy flash grenades.

Representative Adam Smith, Democrat of Washington and the chairman of the House Armed Services Committee, called on Tuesday for Secretary of Defense Mark T. Esper and the chairman of the Joint Chiefs of Staff, Gen. Mark A. Milley, to testify before lawmakers about the potential deployments of United States military personnel to states.

“What I want to hear from them is: What role do they envision the United States military playing in dealing with the violence and the protests we are seeing in the cities?” Mr. Smith said.

Mr. Smith referred to comments made by Mr. Esper on a call led by Mr. Trump with the nation’s governors on Monday, in which the defense secretary used military language to describe the response to protests, telling governors, “We need to dominate the battle space.”

“Language like that is deeply concerning in terms of how the military could be used for domestic law enforcement,” Mr. Smith said.

Even moderate Democrats in conservative-leaning districts emphatically denounced Mr. Trump’s response to the protests in Washington, in a sign that there may be little sympathy for the president’s actions among their constituents. Representative Abigail Spanberger, Democrat of Virginia, a former C.I.A. officer, called his response the type of action “undertaken by authoritarian regimes throughout the world.”

“I know this playbook,” Ms. Spanberger said, citing her national security background, “and I know the president’s actions are betraying the very foundation of the rule of law he purports to support — the U.S. Constitution.”

Representative Steny H. Hoyer, Democrat of Maryland and the majority leader, said on Tuesday that House leaders had asked the Congressional Black Caucus to take the lead on assembling a package of bills that would address police brutality, racial profiling and other misconduct in the coming days. He said the House would return to Washington to vote as soon as a package was ready for its consideration.

“This is a matter of great urgency, and we expect to act as soon as possible,” Mr. Hoyer said, adding that legislation would seek to “change policies so that these incidents that are happening on a regular basis stop occurring.”

“This can’t happen in America,” he said.

Mr. Hoyer said Mr. Trump’s actions Monday night might lead to a censure vote by the House, calling it “certainly an action worthy and appropriate to censure and to criticize,” though he cautioned that members had not yet discussed the idea.