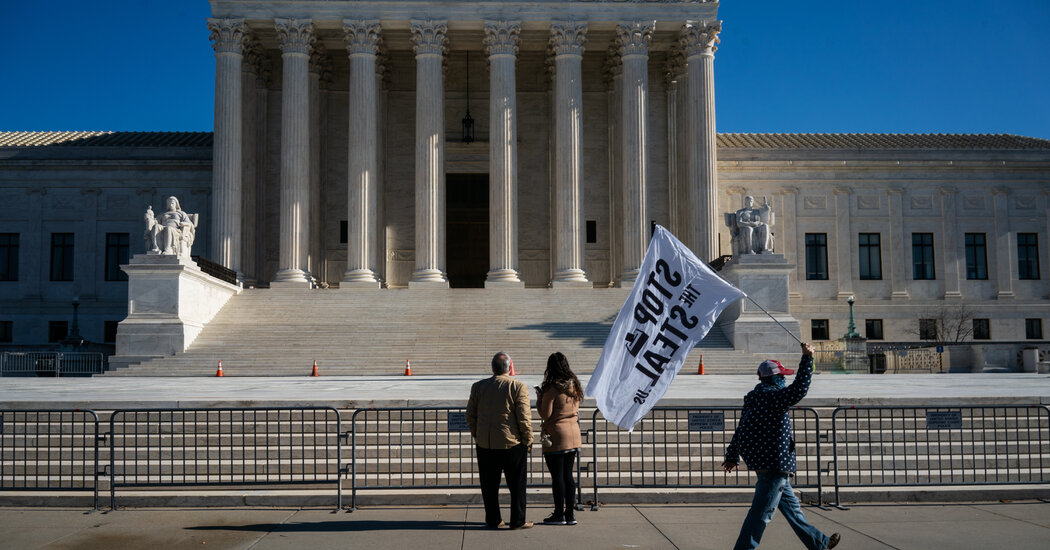 WASHINGTON — When Simon & Schuster canceled its plans this week to publish Senator Josh Hawley’s book, he called the action “a direct assault on the First Amendment.”

And when Twitter permanently banned President Trump’s account on Friday, his family and his supporters said similar things. “We are living Orwell’s 1984,” Donald Trump Jr. said — on Twitter. “Free-speech no longer exists in America.”

It is certainly possible to violate the values embodied in the First Amendment without violating the First Amendment itself. But the basic legal question could hardly be more straightforward, said RonNell Andersen Jones, a law professor at the University of Utah. And, she said, it should not have been lost on Mr. Hawley, who graduated from Yale Law School and served as a law clerk to Chief Justice John G. Roberts Jr.

“It’s become popular — even among those who plainly know better — to label all matters restricting anyone’s speech as a ‘First Amendment issue,’” she said. “But the First Amendment limits only government actors, and neither a social media company nor a book publisher is the government. Indeed, they enjoy their own First Amendment rights not to have the government require them to associate with speech when they prefer not to do so.”

But many in the legal community were nonetheless uneasy about the developments, which underscored the enormous power of a handful of social media companies that are largely insulated from accountability and may change positions on what speech is acceptable as executives come and go.

“I want a wide range of ideas, even those I loathe, to be heard, and I think Twitter especially holds a concerning degree of power over public discourse,” said Gregory P. Magarian, a law professor at Washington University in St. Louis.

But Professor Magarian said the president and Mr. Hawley were in particularly poor positions to complain.

“The First Amendment doesn’t require any private forum to publish anyone’s speech,” he said. “Neither Twitter nor Simon & Schuster has any obligations under the First Amendment.” He added: “Any suggestion that people like Trump and Hawley, and the viewpoints they espouse, will ever lack meaningful access to public attention is ludicrous. We should worry about private power over speech, but presidents and senators are the last speakers we need to worry about.”

“We understand the desire to permanently suspend him now, but it should concern everyone when companies like Facebook and Twitter wield the unchecked power to remove people from platforms that have become indispensable for the speech of billions,” said Kate Ruane, an A.C.L.U. lawyer. “President Trump can turn to his press team or Fox News to communicate with the public, but others — like the many Black, brown and L.G.B.T.Q. activists who have been censored by social media companies — will not have that luxury.”

Mr. Hawley’s book, titled “The Tyranny of Big Tech,” was to have been published in June. In canceling it, Simon & Schuster said that “it will always be our mission to amplify a variety of voices and viewpoints” but that Mr. Hawley had crossed a line in light of “the disturbing, deadly insurrection that took place on Wednesday in Washington.”

“We take seriously our larger public responsibility as citizens,” the company said, “and cannot support Senator Hawley after his role in what became a dangerous threat to our democracy and freedom.”

The publisher was free to make that decision, legal experts said, but that does not mean it was the right one.

As it happens, the Supreme Court may decide as soon as Monday whether to hear a case about Mr. Trump’s Twitter account, one that nicely illustrates some of the distinctions raised by the recent developments. Lower courts have ruled that Mr. Trump violated the First Amendment by blocking users from his account.

Since Mr. Trump is a government official who used the account to conduct official business, a unanimous three-judge panel of the United States Court of Appeals for the Second Circuit, in New York, ruled in 2019 that the account was a public forum from which he was powerless to exclude people based on their viewpoints.

“We conclude that the evidence of the official nature of the account is overwhelming,” Judge Barrington D. Parker wrote for the court. “We also conclude that once the president has chosen a platform and opened up its interactive space to millions of users and participants, he may not selectively exclude those whose views he disagrees with.”

Had the account been private, Judge Parker wrote, Mr. Trump could have blocked whomever he wanted. (For instance, the user who observed that “the same guy who doesn’t proofread his Twitter handles the nuclear button.”)

But since he used the account in his official role as a government official, he was subject to the First Amendment, which prohibits discrimination based on viewpoints.

Jameel Jaffer, the executive director at the Knight First Amendment Institute at Columbia University, which sued Mr. Trump over his handling of his account, explained the distinction.

“We sued the president, not Twitter, and this makes all the difference, legally,” he said. “Government actors have to comply with the First Amendment, but private corporations don’t.”

“As a result,” Mr. Jaffer said, “the president can’t block people from his social media accounts based on their political views, but Twitter can ban people from its platform for pretty much whatever reasons it wants to. Reasonable people can disagree about whether Twitter was right to ban Trump, but there’s no question it was legally entitled to do it.”

Internet platforms should voluntarily embrace First Amendment values, he said, and generally allow citizens to assess the statements of politicians for themselves. But there are limits, he said, and incitement to violence is among them.

“To take an account down in these circumstances is not an affront to free speech, as some have suggested,” Mr. Jaffer said. “To the contrary, it’s the responsible exercise of a First Amendment right.”

Twitter’s permanent suspension of Mr. Trump may make the pending case moot, leaving Supreme Court jurisprudence in this area a work in progress.

In 2017, for instance, the court considered the constitutionality of a North Carolina law that barred registered sex offenders from using Facebook, Twitter and similar services in Packingham v. North Carolina. When the case was argued, the justices discussed just how thoroughly social media had transformed American civic discourse.

Justice Elena Kagan said that Mr. Trump, every governor and every member of Congress had Twitter accounts.

“So this has become a crucially important channel of political communication,” she said. “And a person couldn’t go onto those sites and find out what these members of our government are thinking or saying or doing.”

Justice Samuel A. Alito Jr. said, a little incredulously, “I know there are people who think that life is not possible without Twitter and Facebook.”

In the end, the court unanimously struck down the law, though the justices could not agree on a rationale. Writing for the majority in his characteristically cryptic manner, Justice Anthony M. Kennedy, who retired in 2018, said the internet was poised to transform First Amendment jurisprudence.

“While we now may be coming to the realization that the cyberage is a revolution of historic proportions, we cannot appreciate yet its full dimensions and vast potential to alter how we think, express ourselves and define who we want to be,” he wrote. “The forces and directions of the internet are so new, so protean and so far-reaching that courts must be conscious that what they say today might be obsolete tomorrow.”