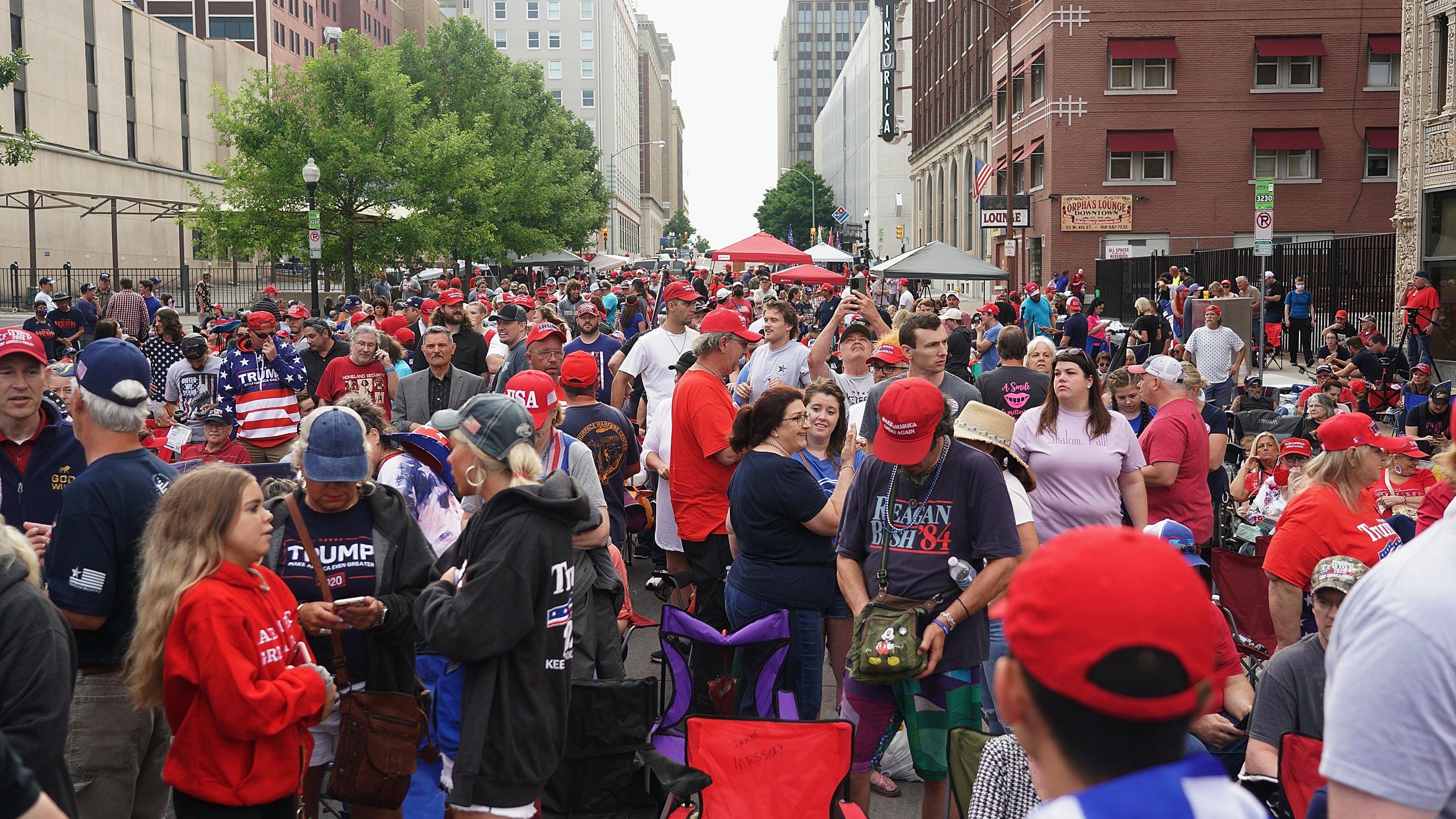 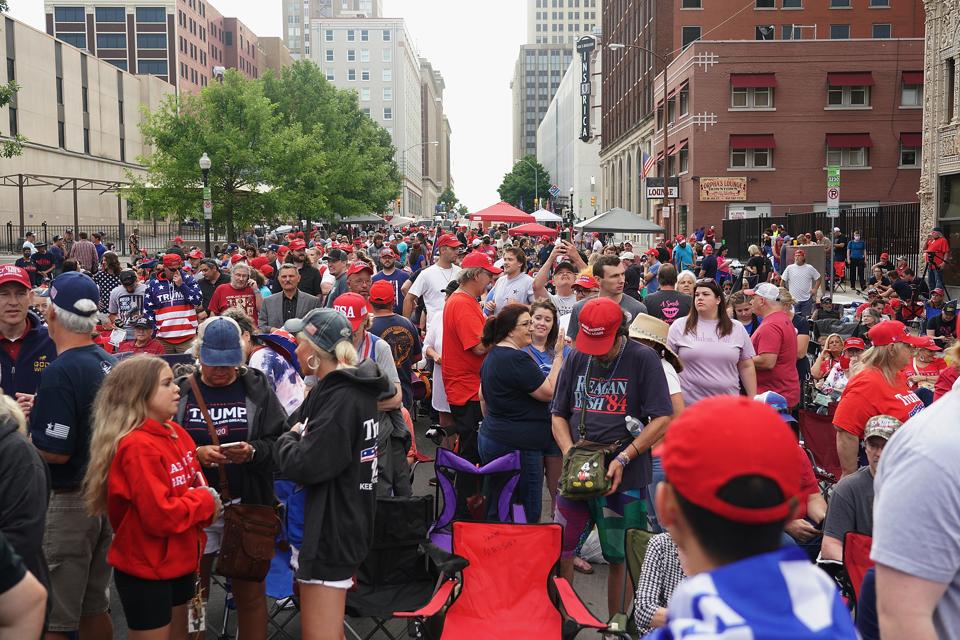 A crowd of Donald Trump supporters are seen as they wait prior to a campaign rally for President … [+] Donald Trump on June 20, 2020 in Tulsa, Oklahoma. Trump is scheduled to hold his first political rally since the start of the coronavirus pandemic at the BOK Center on Saturday while infection rates in the state of Oklahoma continue to rise. (Photo by Michael B. Thomas/Getty Images)

The hashtag #Coronapalooza was trending on Twitter Friday night and #TrumpsCoronavirusRally today. No, these aren’t the official names of President Donald Trump’s campaign rally that’s scheduled to take place today at 7 pm in Tulsa, Oklahoma. They were more of a reaction to the rally, as you can see here:

Such hashtags reflect concerns that one of the uninvited attendees at the rally will be the Covid-19 coronavirus. And being able to interact with lots of people in an enclosed space could end up being quite helpful for this virus’s campaign.

The booked venue for the rally is the BOK Center, which isn’t the place to get bok choy but an indoor arena with a capacity of around 19,000 people. The BOK Center was supposed to be the site of a July 8 Justin Bieber concert, which was postponed due to the pandemic. In fact, according to the BOK Center website, most of the originally scheduled upcoming events have been postponed, including the September 30 “Vampire Weekend.” While you won’t be hearing the Beibs sing “Yummy” on the BOK stage or seeing a bunch of vampires there anytime soon, you will be hearing Trump today. Except, he won’t be singing “Yummy,” but rather delivering a speech as part of his campaign to be re-elected as President of the U.S.

Public health officials are worried that such a mass indoor gathering may prove to be “yummy” for the virus. As Noah Weiland reported for the New York Times, Bruce Dart, Ph.D., Executive Director of the Tulsa Health Department, said of the campaign rally, “It’s the perfect storm of potential over-the-top disease transmission. It’s a perfect storm that we can’t afford to have.” A perfect phone call may be OK, assuming that it was really perfect. But a perfect storm? That doesn’t sound very good.

Dart wasn’t just throwing darts at the Trump campaign. What he said was in line with what scientific evidence would indicate. Just look at the Centers for Disease Control and Prevention (CDC) “Considerations for Events and Gatherings” website. The website divides mass gatherings and events into four risk levels:

Gee, where does Trump’s Tulsa rally fall? Well, it won’t just be on Zoom, Skype, Nickelodeon, or some other “virtual-only” platform so that rules out the “lowest risk” category.

Moving on to “more risk category,” unless you are in the habit of having 10,000 people over to your house for dinner, the size of the rally probably doesn’t qualify as a “smaller outdoor” or “in-person” gathering. Plus, it doesn’t seem like everyone in the pre-rally gathering here was staying at least six feet apart from others:

Since U.S. Vice President Mike Pence is listed as being five-foot-10, you would have to be able to fit more than Pence in between everyone for them to be at least six feet apart. Some of those folks don’t even look half-a-Pence from each other.

The “more risk” category also specifies a wearing face covering. There doesn’t seem a be too many face coverings in this crowd. Heck even White House Press Secretary Kayleigh McEnany said in this Bloomberg QuickTake video that she’s not planning on wearing a mask:

Correction, it’s a personal choice that then affects everyone with whom you come into close contact, making it a personal choice made for others. Note that getting tested regularly does not mean that you don’t need to wear a mask to protect others. Even if McEnany were to get tested every half hour today, which would be a lot of cotton swabs up the nose, she could still become infectious in between getting the test results.

Regardless, a peek inside the BOK Center before the rally doesn’t show too many masks being worn: 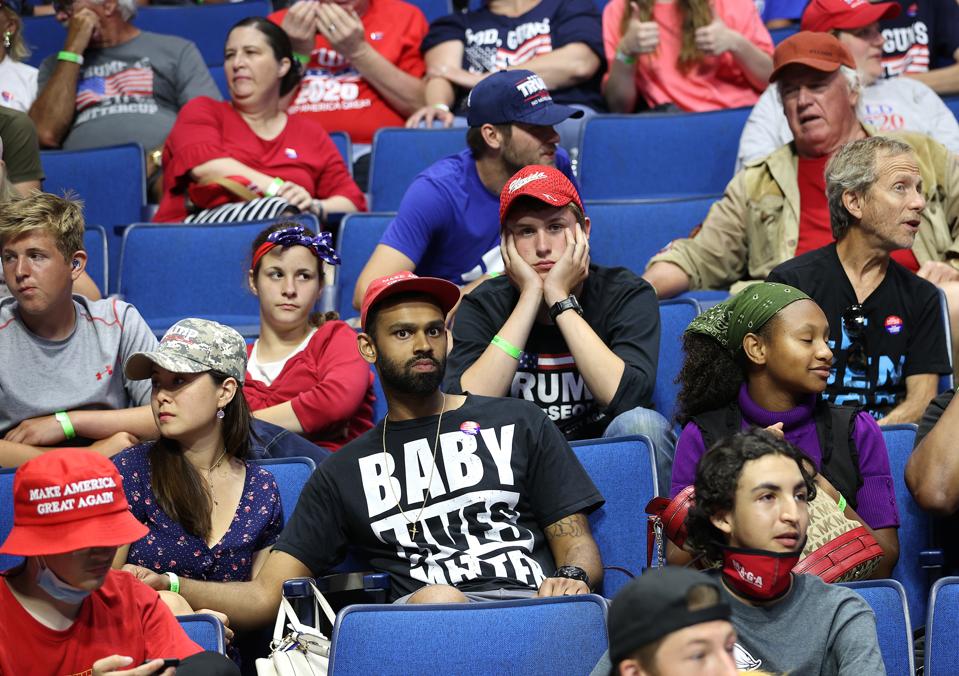 View from within the BOK Center. (Photo by Win McNamee/Getty Images)

And although this person selling Trump merchandise is wearing a mask and a face shield, leaving the nose exposed sort of defeats much of the purpose, as I described previously for Forbes: 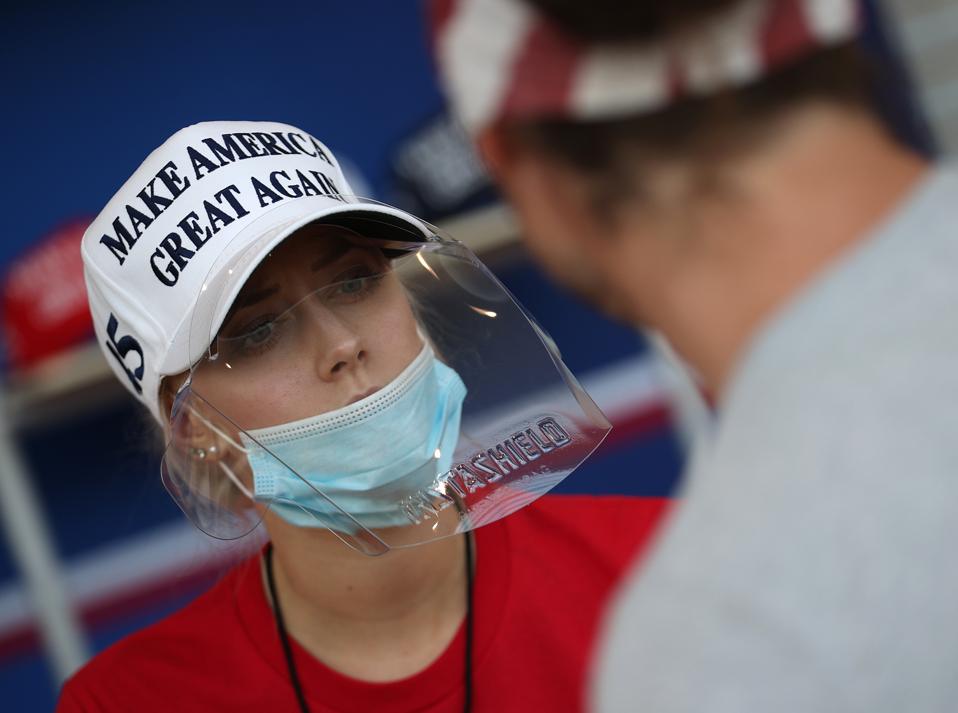 This is not how you are supposed to wear a face mask. (Photo by Win McNamee/Getty Images)

So that leaves “higher risk” and “highest risk.” Here’s one situation where size does matter. Length does too. More people means more interactions. As the CDC indicates, more and longer interactions mean greater risk for Covid-19 transmission and spread to occur.

So, will people at the rally be able to stay at least six feet apart from each other? Well, unless everyone in the following picture is giant-sized, many of them appear to be closer than six feet separated while waiting to enter the BOK Center: 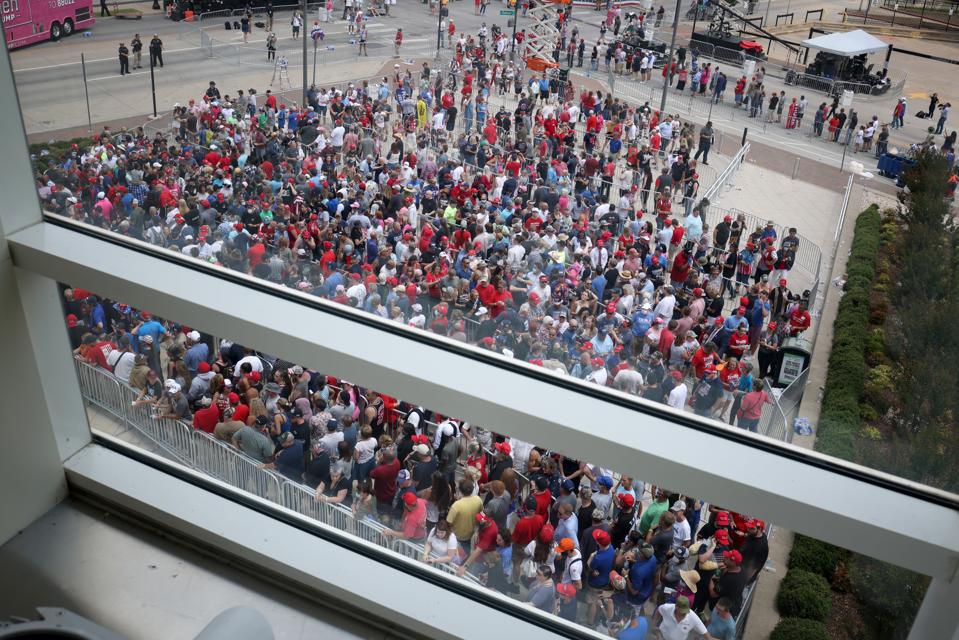 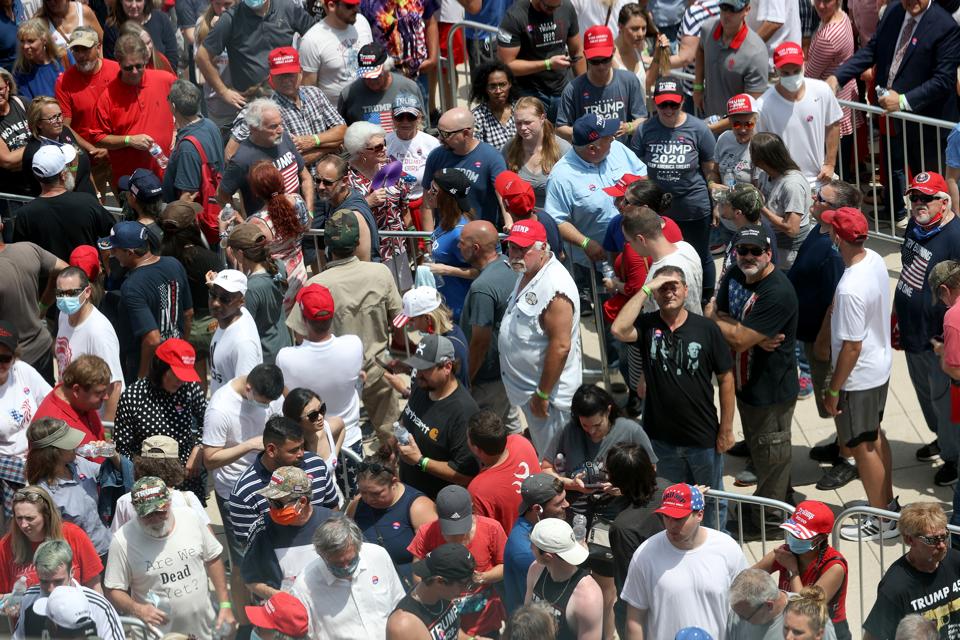 Here is a closer-up view of the line to the BOK Center. (Photo by Win McNamee/Getty Images)

Plus, this tweet by Trump suggests that he may not be a fan of the keep-everyone-six-feet-apart thing:

The CDC website also states that the “higher the level of community transmission in the area that the gathering is being held, the higher the risk of Covid-19 spreading during a gathering.” So is community transmission of the Covid-19 coronavirus very low in Tulsa? Not exactly. If you look at the Oklahoma (OK) State Department of Health website, you’ll find that not everything is OK in OK as far as the Covid-19 coronavirus is concerned. There were 367 new reported cases over the past 24 hours to bring the state total to 9,706 over the course of the pandemic.

All of this suggests that the Trump Tulsa rally falls into the “highest risk” category. Is the Trump campaign not worried about this then? Well, the registration page for the Trump rally does include the following:

“By clicking register below, you are acknowledging that an inherent risk of exposure to COVID-19 exists in any public place where people are present. By attending the Rally, you and any guests voluntarily assume all risks related to exposure to COVID-19 and agree not to hold Donald J. Trump for President, Inc.; BOK Center; ASM Global; or any of their affiliates, directors, officers, employees, agents, contractors, or volunteers liable for any illness or injury.”

Hmm, “don’t worry about this but sign this waiver” is not exactly the most re-assuring stance.

Although some may argue that assuming risk is a personal choice, when dealing with a highly contagious disease, putting yourself at risk in turn puts others at risk. Catching the coronavirus is not the same as bungee jumping or head-butting a rhino. If you were to get infected at the rally, you could subsequently pass the virus to your family members, friends, and anyone with whom you may come into contact. And most of these people probably didn’t go to the rally or sign the waiver.

The severe acute respiratory syndrome coronavirus 2 (SARS-CoV-2) continues to spread throughout the country. It hasn’t gone away. Any mass gathering that is not necessary could end up being a rally on the virus’s behalf.