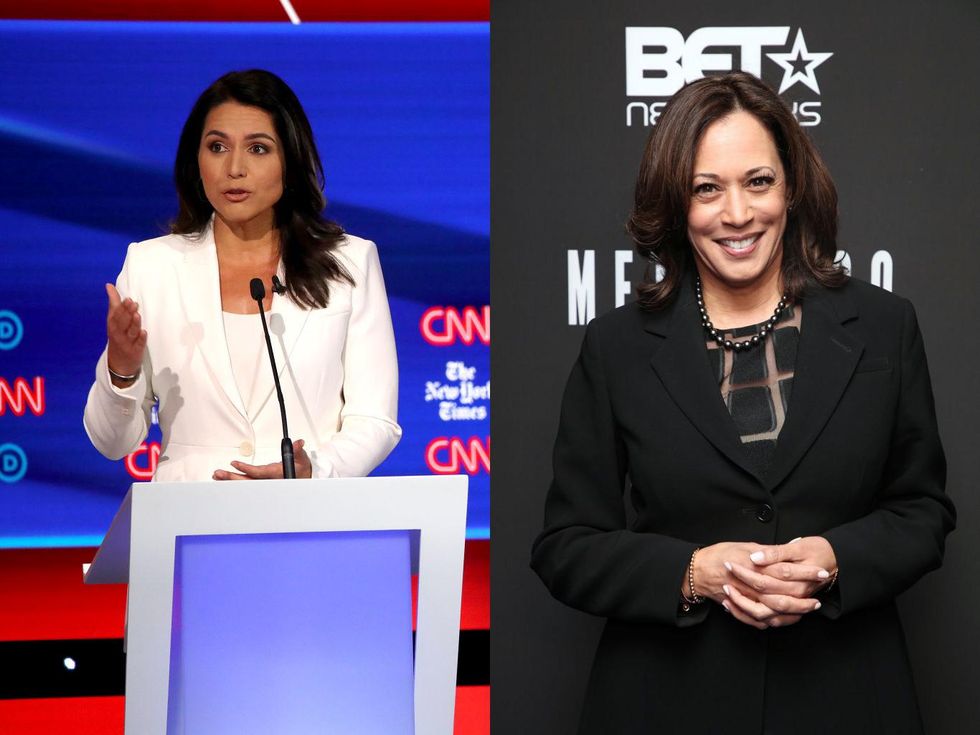 Former Democratic presidential candidate Tulsi Gabbard blasted Vice President Kamala Harris regarding her “hypocrisy” of vehemently defending Brittney Griner but not standing up for Americans locked up at home for marijuana violations – including those who were prosecuted by the former California attorney general.

On Thursday, Vice President Harris condemned Russia for sentencing Griner to nine years in prison for possessing a cannabis vape pen at an airport near Moscow earlier this year.

“With today’s sentencing, Russia continues its wrongful detention of Brittney Griner. She should be released immediately,” Harris wrote on Twitter. “@POTUS and I, and our entire Administration, are working every day to reunite Brittney, as well as Paul Whelan, with loved ones who miss each of them dearly.”

Gabbard told Fox News host Will Cain, “Another note of hypocrisy coming from Kamala Harris and this administration, as you mentioned during her illustrious record as attorney general in California…she kept prisoners in prison longer than their sentences to use them as free slave labor yet at the same time these very same people are condemning other countries for doing the exact same thing. It doesn’t make any sense.”

“My question for her and the Biden administration – where is your outrage for your fellow Americans who are sitting in prison today here in the United States of America because of minor marijuana violations,” Gabbard declared. “How come you are not fighting as hard for them to be returned home and reunited with their families as you are for Brittney Griner.”

“To me, the message to the American people through [the administration’s] actions is loud and clear, is that if you are rich and powerful or famous, then you will get special treatment from this administration,” Gabbard proclaimed. “If you are not. We don’t care about you, and we’re going to let you sit there and rot in jail.”

“Unfortunately, like too many politicians, it seems that she puts her finger to the wind and decides the things she’s supposed to be angry about on any given day and if it becomes politically inconvenient or damaging then she’ll switch the other way,” Gabbard said about Harris flip-flopping her opinion of drug enforcement.

Gabbard stressed that she didn’t think that any person should be imprisoned for marijuana offenses.

Harris oversaw thousands of arrests for marijuana as a district attorney and attorney general.

The San Jose Mercury News reported in 2019 that when Harris oversaw more than 1,900 marijuana convictions – including a few dozen who were put in prison – when she was San Francisco’s top prosecutor between 2004-2010.

In 2011, there were 1,970 Americans locked up for marijuana violations when Harris was California’s attorney general, according to the Washington Free Beacon.

Harris staunchly opposed the legalization of marijuana in California when she was a district attorney and when she was the state’s attorney general.

In a radio interview in February 2019, Harris said she smoked marijuana while listening to music by rappers Tupac and Snoop Dogg. However, Tupac didn’t release an album until 1991 and Snoop Dogg’s first album was released in 1993. However, Harris was a deputy district attorney in Alameda County, California, starting in 1990.

This is not the first time that Gabbard has criticized Harris.

Gabbard effectively destroyed Kamala’s 2020 presidential aspirations during a Democratic primary debate in August 2019. Gabbard bashed Kamala for her record as a prosecutor and attorney general in California.

Now, Senator Harris says she’s proud of her record as a prosecutor and she’ll be a prosecutor president, but I’m deeply concerned about this record. There are too many examples to cite, but she put over 1,500 people in jail for marijuana violations, and then laughed about it when she was asked if she ever smoked marijuana. She blocked evidence that would have freed an innocent man from death row until the courts forced her to do so. She kept people in prison beyond their sentences to use them as cheap labor for the state of California, and she fought to keep cash bail system in place that impacts poor people in the worst kind of way.

In February, Gabbard ridiculed Harris for an “embarrassing” performance on the world stage.

Is a beer shortage on tap? Inflation and supply chain pressures on brewers are intensifying

At anti-war protests in Russia, fears for the drafted as ‘cannon fodder’ and a brutal response by police

Rep. Cori Bush claims the Democratic Party is ‘pro-human rights’ as she promotes the ‘Roe The Vote: Reproductive Freedom Tour’

Majority of likely general election voters do not feel as safe now as they did two years ago: Poll

How protests in Iran over Mahsa Amini’s death ‘forever moved the debate’ over women’s...

News DSMW - September 24, 2022
0
Mahsa Amini's death in police custody sparked a remarkable moment of defiance by Iranian women and men. What does it mean for women's rights in Iran?       ...

Is a beer shortage on tap? Inflation and supply chain pressures on brewers are...

News DSMW - September 24, 2022
0
Beer makers face a combination of issues such as inflation and supply chain shortages, which could lead to some beer shortages and brewery closures.      ...

At anti-war protests in Russia, fears for the drafted as ‘cannon fodder’ and a...

How protests in Iran over Mahsa Amini’s death ‘forever moved the...

Is a beer shortage on tap? Inflation and supply chain pressures...

At anti-war protests in Russia, fears for the drafted as ‘cannon...