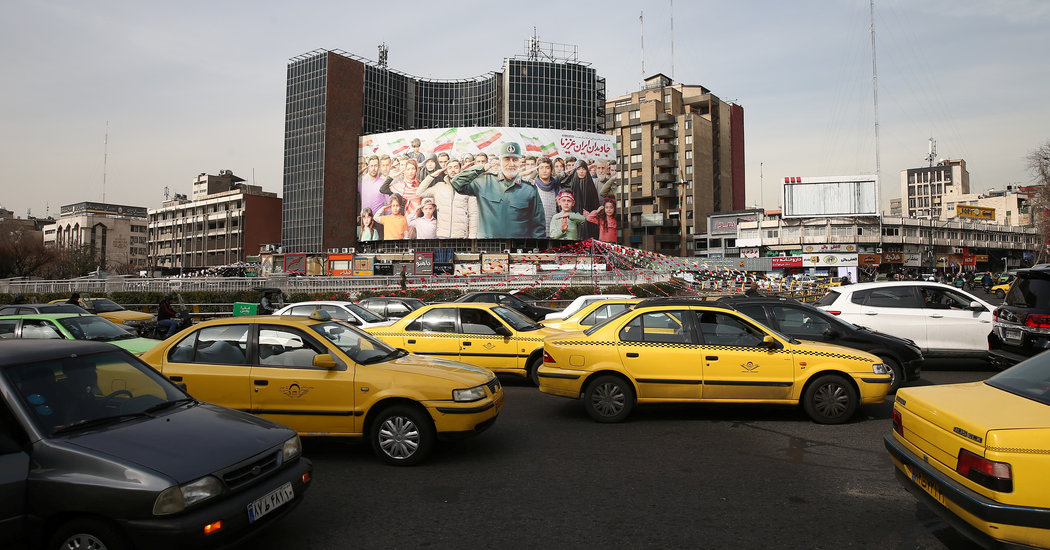 WASHINGTON — The United States and Iran may have pulled back from the brink of war, but they have refused to stand down since the American drone strike in January that killed Maj. Gen. Qassim Suleimani, commander of Tehran’s elite Quds Force.

Instead, the two adversaries have needled each other with increasing pressure. The Trump administration has imposed new sanctions against Iran, while Tehran has flouted Washington’s warnings by shipping weapons to Shiite allies in the Middle East. Iranian-backed militias continue to attack bases in Iraq where Americans are deployed.

The stalemate could last for another year at least, officials and experts say. As Iran grapples with a severe coronavirus outbreak and occasional protests, its leaders are signaling it will wait out the American presidential election in November to decide whether to open new nuclear negotiations with world powers. In the meantime, Congress wants to clip President Trump’s authority to strike Iran.

With Secretary of State Mike Pompeo scheduled to brief the House Foreign Affairs Committee on Friday about the administration’s next steps, here is a look at where things stand.

The administration is sticking with ‘maximum pressure.’

Mr. Pompeo will be asked about the decision to kill General Suleimani in a Jan. 3 strike in Baghdad after an Iranian-backed militia had protested at the American Embassy. But Congress appeared unconvinced of the urgency of the strike: Both the House and Senate have since voted to restrain Mr. Trump’s war powers against Iran.

Over the last two months, the Trump administration has imposed more sanctions against Iran’s oil exports, metals, manufacturing and textile industries, as well as against some of the country’s military commanders, senior officials in its government and officials involved in its elections and nuclear program. On Wednesday, the State Department added the leader of the Iranian-backed Kataib Hezbollah militia in Iraq and Syria to its list of foreign terrorists.

The sanctions are the main tool being wielded by the Trump administration in its push for new limits to Tehran’s nuclear and military programs.

But the American campaign could backfire if the sanctions so weaken Iran’s economy that its citizens become more dependent on the government for a lifeline, experts say.

“It’s been very effective in damaging Iran’s economy,” said Hussein Ibish, a scholar at the Arab Gulf States Institute in Washington. “But you have to ask, ‘To what end?’”

Mr. Pompeo insists it is, but continuing violence exposes the challenges to the policy.

The strike on General Suleimani “provided the Iranians with a deep knowledge that our notion of deterrence is real,” Mr. Pompeo said in Saudi Arabia last week.

General Suleimani’s death was the climax of tit-for-tat violence that began on Dec. 27, when an American interpreter was killed and others wounded in a rocket attack on an Iraqi base carried out by militias supported by Iran. The Pentagon responded by bombing militia members in Iraq and Syria. That led to the riot outside the American Embassy in Baghdad on Dec. 31.

Iran retaliated to General Suleimani’s death by firing missiles at American troops at two Iraqi military bases on Jan. 8. Nobody was killed, but more than 100 troops have reported brain injuries.

Iranian-backed militias have since resumed attacks on the American Embassy and Iraqi bases where U.S. troops are stationed. And Iran was caught this month shipping antiaircraft missiles to Houthi rebels in Yemen.

One senior Iraqi official said the rocket attacks on compounds hosting Americans have become increasingly worrisome. Some rockets are landing closer to frequently-populated facilities, and Iraqi security forces have found nearby staging platforms equipped to launch up to 36 rockets at a time.

In recent months, Mr. Trump has deployed thousands of additional troops to the region.

Are American allies on board?

European allies and other world powers have opposed the sanctions against Iran — particularly the oil embargo — while Arab Gulf States have supported them. But both sides are now united over worries that the American pressure campaign will end any hope of negotiating a new nuclear agreement.

In Europe, officials do not believe the maximum pressure campaign has curbed Iran’s pursuit of a nuclear weapon.

One European diplomat said many Europeans remain concerned that the Trump administration is pursuing regime change — even though American officials insist that is not the goal. That diplomat added that, while the government in Tehran seemed shaken by the recent events, including the accidental downing of a Ukrainian airliner and the protests that followed, it is not likely to fall.

Nor do diplomats expect Iran to step back from its support for proxy militias or halt covert attacks. Arab states have warned of widening violence in the region if Tehran feels pushed too hard by the United States.

Anti-American sentiments in Iraq are already are on the rise, an American official said. A Middle East diplomat also predicted that Iran will carry out more attacks — similar to those against key oil fields in Saudi Arabia or oil tankers around the Strait of Hormuz — to test the Trump administration.

Even Senator Lindsey Graham, Republican of South Carolina and an Iran hawk, has recognized that the Trump administration is offering nothing to entice Iran to come to the negotiating table. Mr. Graham has told people he is working on potential inducements for Washington to offer Tehran.

Two senior Middle Eastern officials who speak to the Trump administration regularly on Iran said they do not expect Ayatollah Ali Khamenei, the supreme leader of Iran, to agree to start new negotiations with the United States soon. Instead, they said, he will wait to see the outcome of the American presidential election in November before deciding on a new strategy.

Mr. Trump said he wants to strike a new deal with Iran that is more expansive than the 2015 nuclear treaty that the Obama administration brokered with world powers and Tehran — and from which Mr. Trump withdrew the United States in 2018. Trump administration officials say they are looking not only for tougher restrictions on Iran’s nuclear program, but also for limits on its ballistic missile efforts and its support for regional militias.

As a way around the American sanctions, European officials are creating a barter system to continue trade with Iran and, in turn, keep the 2015 nuclear deal alive, even though Iran has violated the boundaries of the agreement since Mr. Trump’s withdrawal from it. In January, Britain, France and Germany put Iran on notice that it would reimpose international sanctions if Tehran did not comply with the deal.

At a meeting on Wednesday of the deal’s remaining signers, Iranian diplomats said they were eager to salvage the agreement.

Is it regime change or regime ‘disruption’?

Senior State Department officials have told foreign diplomats that Iran’s leaders are “finished,” and that Tehran is running out of money, according to Western officials.

Last week, Mr. Hook seized on rigged parliamentary elections in Iran as the latest opportunity to encourage domestic opposition, which flared last fall against the government.

However, “I don’t think we’re under any delusions that the regime will collapse tomorrow,” said Mark Dubowitz, chief executive of Foundation for Defense of Democracies, a Washington think tank that consults closely with the Trump administration on Iran policy. “We think there will be continued instability inside Iran, because these protests will break out with greater potency and frequency.”

Last year, on “Intelligence Matters,” a podcast hosted by Michael J. Morrell, a former acting C.I.A. director, Mr. Pompeo defined the goal of the pressure campaign as creating conditions to turn the opinion of Iranians against their government.

American intelligence officials who brief Congress have said that the Iranian government remains stable, even if under pressure.

“I think the administration, in candor, does not even have a strategy for what would replace the regime,” said Rep. Ro Khanna, Democrat of California and a member of the House Armed Services Committee. He called the American pressure campaign “purely punitive.”

And even if the 80-year-old Ayatollah Khamenei left power, diplomats and experts said, his replacement might be even less inclined to pursue diplomacy with the United States.

“The people have no say in the matter,” said Haleh Esfandiari, founding director of the Middle East Program at the Woodrow Wilson Center. “Nor is the selection of a moderate cleric as successor likely.”