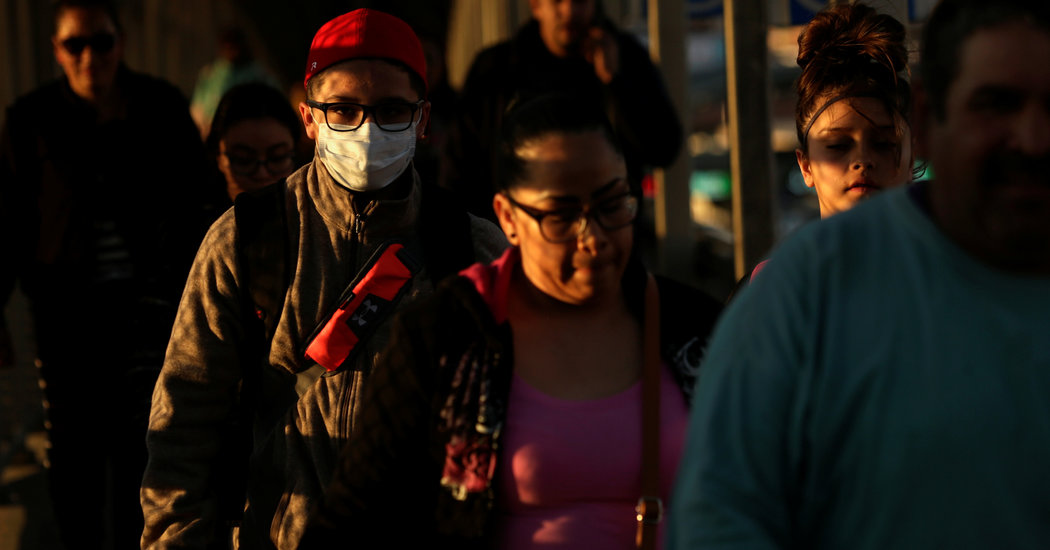 WASHINGTON — The White House, under the guise of its coronavirus response, is quietly advancing policies that President Trump has long advocated, from tougher border controls to an assault on organized labor to the stonewalling of congressional oversight.

And across the government, departments have been citing the “whole of government” response to the pandemic as they push through the same policies they sought before the crisis. Just this week during a coronavirus briefing, Mr. Trump said his administration would use authority granted to the surgeon general to immediately turn away those who crossed the border illegally.

At the Agriculture Department, officials said they were teaming up with companies like PepsiCo to quickly deliver food boxes to students in rural areas, although Congress has repeatedly rejected the Trump administration’s push for such meals, arguing that they contained low-quality food without healthy alternatives.

Administration officials insist that such long-sought policies are necessary to stem the outbreak. But opportunism is clearly in play.

“Under normal conditions there would be extended debate and back and forth, but under this emergency some of those things will get through with less scrutiny,” said David Lapan, a former spokesman for the Department of Homeland Security in the Trump administration. “It is a way to use this national emergency or pandemic to push through some of these quickly that might not get through in the normal course of business.”

Mr. Trump, for instance, has claimed the “country is full” and wanted to shut the southwestern border to border crossers seeking asylum, but the courts have repeatedly said he must extend due process rights. So this week, using legal authorities granted to the surgeon general to pursue public health, he said he would move forward with sending foreigners who illegally cross the border, including asylum seekers, immediately back to Mexico for fear of spreading the coronavirus to detention facilities and Border Patrol agents.

Days later, the Federal Labor Relations Authority published a little-noticed rule that would make it easier for federal workers to stop the withholding of their union dues, saying it would increase wages at a time of economic crisis. Everett Kelley, the national president of the American Federation of Government Employees, called the proposed rule “just another in a series of activist steps the F.L.R.A. has taken to advance this administration’s goal of busting unions.”

Mr. Kelley said it was “disgraceful” that the administration would push forward with the rule “in the midst of a pandemic” that depended on federal employees like caregivers at the Veterans Affairs Department, airport screeners and food inspectors, all of whom are performing their jobs under hazardous conditions.

In the midst of the outbreak, Mr. Trump pressured his top economic adviser to push Jerome H. Powell, the Federal Reserve chair, to rapidly and drastically cut interest rates as concern grew that the spreading disease could tip the United States into a recession. While Mr. Powell slashed rates by half a percentage point in one of the earliest global central bank responses to the virus, he was reluctant to cut them as aggressively as the president wanted him to before the outbreak.

At the State Department, Secretary of State Mike Pompeo has called for the release of political prisoners around the world, citing the virus instead of earlier arguments.

Meantime, the White House has informed the House Oversight and Reform Committee that members of its coronavirus task force will not be testifying before the panel. The Trump administration said the officials could not be available for three weeks because they were “directly focused on executing its day-to-day response to Covid-19.”

But the halt, Democrats said, appeared to be in line with the stonewalling the administration has engaged in since the Mueller investigation and the impeachment process, and came after testimony by health officials in the administration had raised serious questions about the White House response.

Some lawmakers said the crisis was presenting the administration with a mixed bag of policies that furthered its agenda, and ones that ran counter to it.

“They’re exploiting it for their ideological purposes, but they’re also having to simply acquiesce on traditional Democratic and progressive values as well,” said Representative Gerald E. Connolly, Democrat of Virginia. He noted that Republicans and Mr. Trump had been forced to support paid family leave, as well as the largest stimulus bill in history in a rush, “signing into law things they have historically opposed.”

Opponents of Mr. Trump’s policies have also cited the national emergency in urging the president to pull back on his tariffs and relax enforcement by the Department of Housing and Urban Development and Immigration and Customs Enforcement, the agency tasked with deporting immigrants in the United States illegally.

Representative Bennie Thompson of Mississippi, the chairman of the House Homeland Security Committee, said on Thursday that in order to ensure rapid testing of the coronavirus and provide care to the ill, “the Trump administration must state — publicly, formally and clearly — that all ICE raids will stop during this crisis except against felons or those who pose a risk to national security.”

The White House has belatedly provided support to state governments after weeks of criticism that the full capacity of the federal government had not been used to quell the pandemic. But one of Mr. Trump’s earliest steps to contain the spread of the virus was to revert to one of his favorite topics: border security.

When pressed about his administration’s response to the outbreak, Mr. Trump often refers to the early decision to enforce stringent travel restrictions that barred foreigners from coronavirus hot spots and funneled Americans abroad to designated airports.

He expanded that effort this week when he confirmed that he would move to seal the southwest border to those who lacked legal authorization. That could have been avoidable “if there had been more recognition that this could be a pandemic that it has become,” said Noah Kroloff, a former Homeland Security Department chief of staff.

“You might have been able to prevent some of the more onerous measures that have had to be taken now,” he added.

The White House said the only factor in its response was protecting the public health. Judd Deere, a White House spokesman, said that “whether it be providing food to children impacted by school closures, closing our border to certain countries and regions where the virus is spreading, or pausing all interest on student loans, this president wants us to put politics aside and come together.”

While there were 118 confirmed cases of the virus in Mexico as of Thursday evening compared with more than 13,000 in the United States and more than 800 in Canada, Mr. Trump said his administration was committed to using powers granted to top health officials to turn away those crossing the border illegally.

Under the new rule, the details of which continue to be developed, Border Patrol agents would immediately drive migrants who cross illegally to the nearest port of entry and return them to Mexico without detaining them or providing due process. It is unclear whether the tight restrictions would apply to certain migrants like unaccompanied children or people requesting protections at the ports of entry.

Even before the government of Mexico agreed to sign off on the rule, Mr. Trump said his administration would rapidly enact it. Previous proposals that would return Central American migrants from the United States to Mexico required the consent of Mexico.

The Mexican government, which was blindsided by the policy, said that Marcelo Ebrard, Mexico’s foreign minister, had spoken with Mr. Pompeo by phone on Tuesday “to share information and coordinate mechanisms to prevent the spread of Covid-19 between both countries.”

Mr. Ebrard “emphasized the willingness of the government of Mexico to collaborate with the various authorities of the United States government to face — jointly and in coordination — the pandemic at the regional level,” the Mexican government said.

Administration officials have argued that the move is not an attempt to fulfill Mr. Trump’s campaign promise of a border crackdown, but rather to prevent an outbreak in detention centers along the border.

“He’s keeping his campaign promise to protect Americans and protect this country,” said Thomas Homan, the former acting director of Immigration and Customs Enforcement. “That’s why the southern border is closing.”

Reporting was contributed by Lola Fadulu, Lara Jakes and Alan Rappeport from Washington, and Kirk Semple from Mexico City.