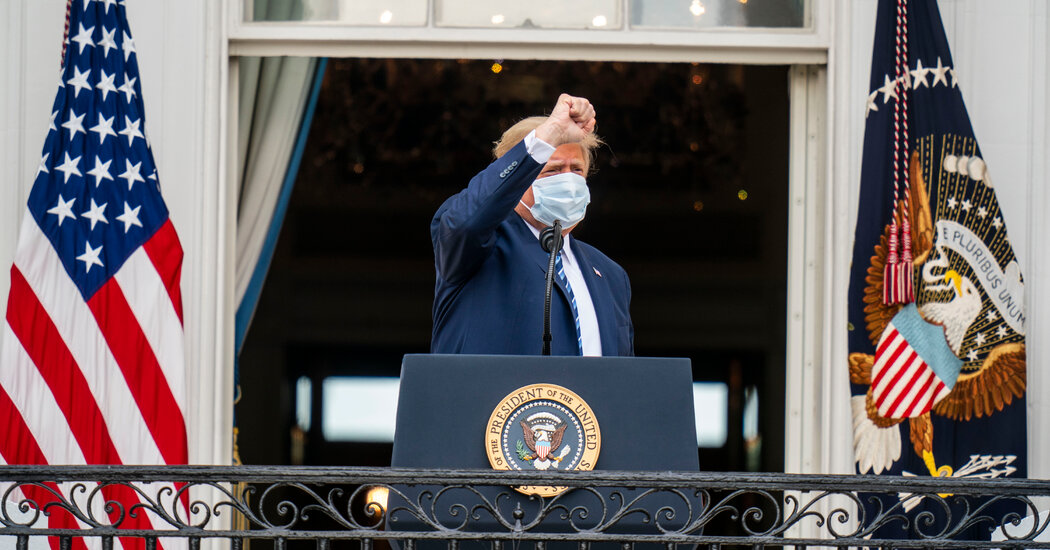 WASHINGTON — President Trump, eager to prove he is healthy and energetic despite his recent hospitalization for Covid-19, is set to return to the campaign trail on Monday night in Florida, a state his advisers think he must win in November, but where voters were overwhelmingly repelled by his performance at the first general election debate.

Supporters and critics of the president are likely to focus as much on how the president looks and sounds at the rally as on anything he says. The question of whether he is healthy enough to make it through a full Trumpian performance — usually at least 90 minutes — without flagging is one that will hover over him until the election on Nov. 3.

On Saturday at the White House, in his first public appearance since returning from Walter Reed National Military Medical Center, Mr. Trump spoke for only 18 minutes, uncharacteristically cutting an appearance short. His aides had said he would speak for 30 minutes. But top campaign officials said on Monday that they had no concerns about his energy or overall health, only enthusiasm that the candidate was ready to return to the campaign trail.

“This morning, in our morning conversation, he was getting on my case for not having enough rallies,” said Jason Miller, the Trump campaign’s senior strategist. He said the president’s schedule would include “two to three events a day, and that will grow as we get closer to Election Day.”

The frenetic pace serves as a reminder that with three weeks left in the race, Mr. Trump is running from behind. His polling numbers with seniors, a crucial constituency that has been disproportionately harmed by the coronavirus, have been flagging. His campaign has sought to stabilize its numbers with a new television advertisement aimed at changing the negative perception of Mr. Trump’s handling of the pandemic, quoting Dr. Anthony S. Fauci, the nation’s top infectious disease expert, seemingly praising the president.

“I can’t imagine that anybody could be doing more,” Dr. Fauci said in a clip that he has since said was taken out of context and used without his consent. The campaign said it intended to continue airing the commercial.

A strong showing of stamina less than two weeks after testing positive would help the president, who did not wear a mask as he boarded Air Force One to head to the rally on Monday, continue to play down the virus, just as he has done since March. And it is critical to the case that he has tried to mount against former Vice President Joseph R. Biden Jr., the Democratic nominee, whom Mr. Trump has tried to portray as mentally and physically frail, unable to leave his basement or draw big, enthusiastic crowds.

But over the past 10 days, it has been the president confined to the hospital and then the White House, while Mr. Biden has been out campaigning.

Mr. Trump and his advisers are making a robust effort to win Florida’s 29 electoral votes, as he did in 2016, making it clear he was on track for the presidency. In the state, where seniors are a crucial part of the president’s base, his advisers have tried to make up for any losses by adding to his margins of support among Latino and Black voters.

On a call with reporters on Monday before the rally, Bill Stepien, the president’s campaign manager, said that “every campaign changes from election to re-election” and that any losses with older voters would be “offset by gains in certain voting populations,” listing Black and Hispanic voters.

But the Trump campaign is still making a play for older voters. A recent advertisement juxtaposes Mr. Trump’s image against Mr. Biden’s and asks, “Who’s better for seniors?” And last week, the president posted a video on Twitter with a message in which he labeled seniors “MY FAVORITE PEOPLE IN THE WORLD!”

Mr. Trump’s advisers, who say the public polls are not accurate, hope that he can maintain a robust campaign trail presence between now and the next debate, scheduled for Oct. 22, to try to regain his standing.

Shoring up core constituencies is not where his advisers thought they would be at this point in the election cycle. The president began the year with advisers talking about expanding his political map into Democratic-leaning states like Nevada, Minnesota, New Hampshire and even New Mexico. But this week, Mr. Trump is so far scheduled to go to states he won in 2016 and where he is mostly playing defense right now — not just Florida, but also states like Pennsylvania and Iowa.

He seems determined to run the same playbook he ran in the final few weeks of the 2016 race, outworking his opponent on the campaign trail. However, back then, he paired a dizzying schedule of rallies with a trimming back of incendiary tweets. But as an unpopular incumbent through most of his time in office, it is not clear how seeing more of Mr. Trump now will necessarily win back support from voters who have tired of his behavior.

“At the end of the 2016 campaign, the president apparently cut back on his Twitter messages and became somewhat less visible at the time the Comey letter was becoming more and more prominent,” said Whit Ayres, a Republican pollster, referring to a letter that the director of the F.B.I. at the time, James B. Comey, sent to Congress after discovering a tranche of Hillary Clinton’s emails on a laptop used by Anthony D. Weiner, the estranged husband of one of her top aides.

That letter is widely seen as affecting voter sentiment about Mrs. Clinton, the Democratic nominee that year, late in the campaign, and no similar event has so far hurt Mr. Biden. Mr. Trump, meanwhile, has told aides he wants to be on the campaign trail every day and he has continued with his slashing, acerbic tweets.

“It’s not clear that seeing more of the president is necessarily a help to his campaign,” Mr. Ayres said.