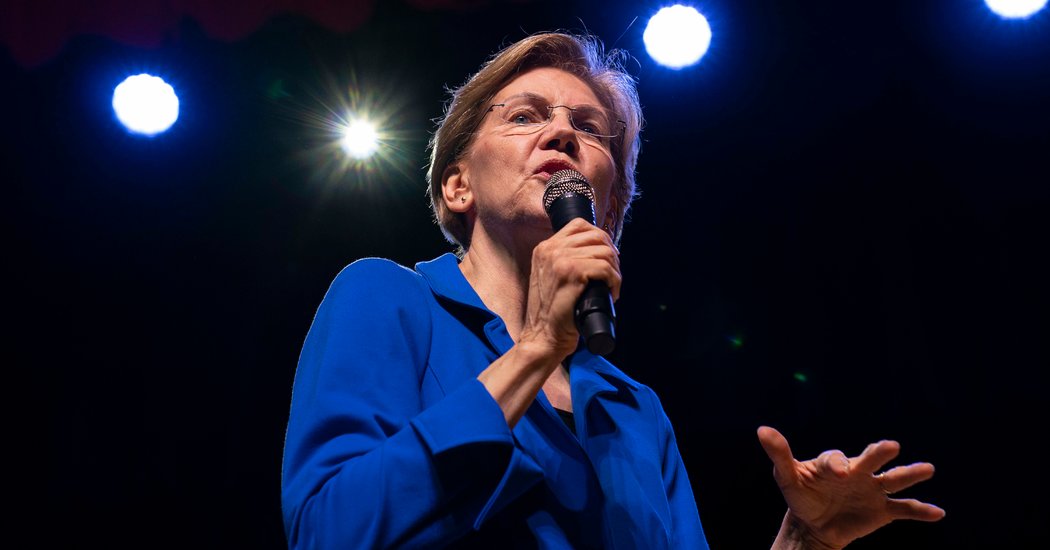 Senator Elizabeth Warren of Massachusetts called Wednesday for the federal government to redirect money from the construction of President Trump’s border wall and put it toward the containment of the fast-spreading coronavirus.

“I’m going to be introducing a plan tomorrow to take every dime that the president is now taking to spend on his racist wall at the southern border and divert it to the coronavirus,” Ms. Warren said on a CNN town hall program from Charleston, S.C., joining her opponents in the Democratic presidential primary in excoriating the Trump administration’s response to the threat.

The criticism came just after Mr. Trump held a news conference about the virus, and as American health authorities braced for an outbreak in the United States, with a new case confirmed in California with no apparent links to travel abroad.

Three days before the South Carolina Democratic primary, the candidates seemed to unite, momentarily, around a message while selling their own public-health savvy.

“The president is not ready for this kind of thing,” Michael R. Bloomberg, the former New York City mayor, said at his own CNN town hall while Mr. Trump was still speaking in the White House briefing room. “He has left us very exposed.”

Two other candidates who were also appearing on CNN took similar aim at the president, insisting that they would do a better job in containing the virus. While Mr. Bloomberg brandished his experience leading New York City through the swine flu outbreak in 2009, former Vice President Joseph R. Biden Jr. invoked his time in the Obama administration as it worked to contain the Ebola virus in 2014.

“Were I president now,” Mr. Biden said of the coronavirus, “I’d insist that China allow our scientists in to make a hard determination of how it started, where it’s from, how far along it is. Because that is not happening now.”

Senator Amy Klobuchar of Minnesota questioned Mr. Trump’s decision to put Vice President Mike Pence in charge of the administration’s response to the outbreak, which has disrupted supply chains and prompted a stock sell-off.

“I would think usually you might put a medical professional in charge,” Ms. Klobuchar said, though she acknowledged that the vice president’s involvement might help to elevate the effort. (President Barack Obama named Ron Klain, a Democratic operative, to coordinate the government’s response to the Ebola virus.)

While calling out the president’s proposed cuts to funding for the Centers for Disease Control and Prevention, Ms. Klobuchar also delivered faint praise of Mr. Trump’s choice to invite the agency’s principal deputy director to address the nation alongside him. “He did do it with the C.D.C.,” she said. “I think that’s important, because I believe in science.”

Ms. Warren in recent days has pointed to a plan she released weeks ago focused on combating infectious disease outbreaks. On Wednesday she escalated her proposal, with the specific suggestion of redirecting the border-wall money to address the outbreak.

“We know that with any virus that develops, the most vulnerable will be our children, seniors, people with compromised immune systems,” she said. “This one is tough.”

Mr. Bloomberg, too, planned to step up his message on Thursday, when his campaign will begin airing a new television ad nationally that is focused on the virus. “Health experts warn the U.S. is underprepared,” the ad begins. “Managing a crisis is what Mike Bloomberg does.”

Announcing the commercial Wednesday, Mr. Bloomberg’s campaign tore into the president. “Trump is putting American lives at risk every day, ignoring science, claiming the virus will ‘miraculously’ disappear by April and relying on ‘warm weather’ to end the spread of the virus,” the campaign said in a news release.

On Wednesday, Mr. Trump issued a message on Twitter criticizing the news media for “doing everything possible to make the Caronavirus look as bad as possible, including panicking markets, if possible.” He added, “Likewise their incompetent Do Nothing Democrat comrades are all talk, no action.”

Senator Bernie Sanders of Vermont, the front-runner in the Democratic race, was not among the candidates participating in the CNN town halls on Wednesday, but he has also called Mr. Trump ill informed about the virus.

Mr. Bloomberg reacted with a similarly sarcastic tone on Wednesday. “Oh, I feel so much better,” he said. “No.”

“No. 1, he fired the pandemic team two years ago,” Mr. Bloomberg added.