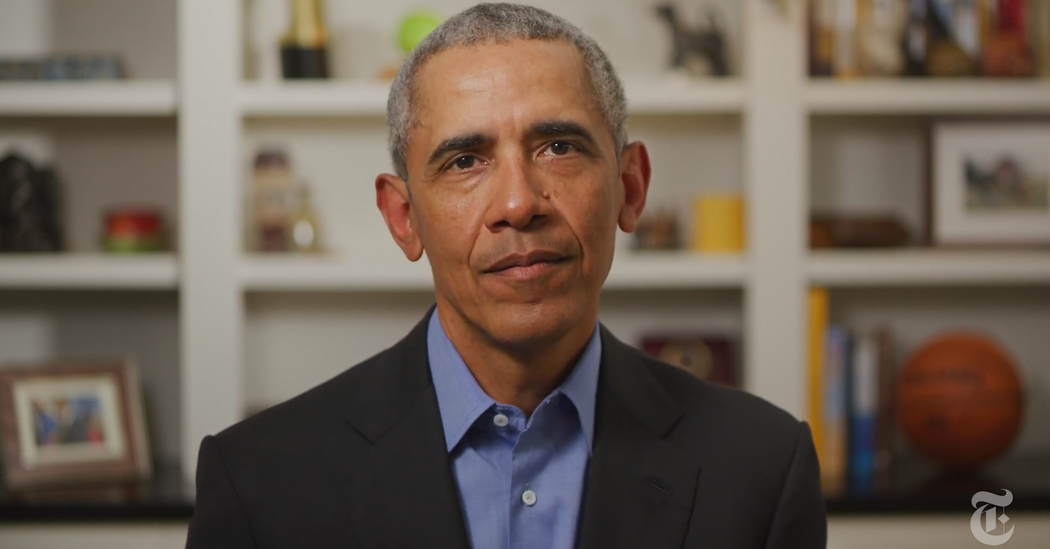 WASHINGTON — Former President Barack Obama on Wednesday is making his first on-camera comments about the killing of George Floyd and protests over police brutality sweeping the country — but he will not attend the memorial planned for Mr. Floyd in Minneapolis on Thursday, contrary to a published report, according to people familiar with his plans.

Mr. Obama said that the wave of protests convulsing the country was “unlike anything I have seen in my lifetime,” but he predicted that it would prompt an “awakening.”

The former president — who is taking pains to address the crisis without upstaging Joseph R. Biden Jr., his friend and the presumptive Democratic presidential nominee — is appearing at a round-table event with his former attorney general, Eric H. Holder Jr., from Washington as part of a video town hall series sponsored by the My Brother’s Keeper Alliance, a nonprofit group Mr. Obama founded.

Before the event, Mr. Obama planned to echo two online essays he posted over the last week in which he implored young protesters to channel their rage into political action turning out for Mr. Biden in November and to embrace local reforms to hold police officers accountable for abuses of power.

“We should be fighting to make sure that we have a president, a Congress, a U.S. Justice Department, and a federal judiciary that actually recognize the ongoing, corrosive role that racism plays in our society and want to do something about it,” he wrote in a post on Medium on Monday.

He will also field a series of prescreened questions mediated by Mr. Holder. In recent appearances, Mr. Obama has become more forceful in his criticism of the White House, hammering President Trump’s actions without invoking his successor’s name. Mr. Obama rebuked the current administration’s response to the coronavirus pandemic as “chaotic” and questioned Mr. Trump’s commitment to the “rule of law” in a call with former members of his White House team last month.

Mr. Obama’s passions are running high, and the disciplined former president is finding it harder to stay on script, friends said. Over the last few days, he has been working the phones with close associates, including Mr. Holder, venting his disgust at the White House’s response to the protests and strategizing about the best way to address the issues without inflaming the crisis or squaring off into a one-on-one fight with Mr. Trump, people close to him said.

On Tuesday, a Minneapolis radio station reported that Secret Service officials were making preliminary preparations for a high-level visitor, perhaps Mr. Obama. But people close to the former president said he had no intention of traveling there this week — although they did not rule out Mr. Obama’s participation in related events in the future.

Shortly before Mr. Obama was set to speak on Wednesday, former President Jimmy Carter issued a statement calling for peaceful protest and systemic change. “As a white male of the South, I know all too well the impact of segregation and injustice to African-Americans,” the 95-year-old former president wrote. “We need a government as good as its people, and we are better than this.”

Those comments came a day after another former president also presented an alternative vision of the protests to Mr. Trump. In a lengthy statement issued by his office, former President George W. Bush expressed solidarity with the demonstrators in the streets and, without naming the incumbent president, warned against trying to suppress their protests.

“It is a strength when protesters, protected by responsible law enforcement, march for a better future,” Mr. Bush said on Tuesday. “This tragedy — in a long series of similar tragedies — raises a long overdue question: How do we end systemic racism in our society? The only way to see ourselves in a true light is to listen to the voices of so many who are hurting and grieving.”

Mr. Bush, the only living Republican former president — and one who refused to vote for Mr. Trump in 2016 — made no direct reference to the current president or his recent threats to use the military to dominate and deter protesters. But Mr. Bush spoke after law enforcement officers deployed chemical agents and flash grenades to forcibly clear peaceful protesters in Washington to make it possible for Mr. Trump to stage a photo opportunity with a Bible in front of St. John’s Church, and the former president’s comments read like a rebuke.

“Those who set out to silence those voices,” Mr. Bush said, “do not understand the meaning of America — or how it becomes a better place.”

Former President Bill Clinton issued a written message of his own on Saturday, denouncing Mr. Floyd’s death and saying that it once again raised profound questions for the nation — but he, too, did not name Mr. Trump.