NORTH CHARLESTON, S.C. — In 2008 and 2016, black voters in South Carolina’s presidential primary set the last two Democratic nominees on their way, backing Barack Obama and Hillary Clinton by huge margins. Rival candidates never managed to catch up in the race for delegates to clinch the nomination.

On Saturday, black Democrats are set to play a far different role in the state’s primary vote, coming to the aid of a candidate who is struggling, former Vice President Joseph R. Biden Jr. At the same time, it is unclear if that support will be enough to help him win in other states. Black voters are likely to split, perhaps sharply, along generational and ideological lines, and spread their votes across contenders, rather than coalesce once again behind a single candidate.

More broadly, in interviews with African-Americans across the state this past week, many said they were eager to send a message to the national Democratic Party: that their views on electability — which candidate is best suited to beat President Trump — would not be shaped by outcomes in the predominantly white states Iowa and New Hampshire, which backed former Mayor Pete Buttigieg and Senator Bernie Sanders in contests earlier in February.

“We’re the base, and we’re yet to express ourselves,” said David Cakley, a church deacon from Goose Creek, S.C, referring to black voters. “Biden needs a boost and we’re going to give it to him.”

Mayor Stephen K. Benjamin of Columbia, S.C., who has endorsed the former New York City mayor Michael R. Bloomberg, summed up the urgency for black voters in this primary by quoting a line from the Atlanta rapper André 3000: “The South got something to say.”

South Carolina signifies a turning point in the campaign: Candidates have been courting black voters in the state for more than a year, and now the Democratic hopefuls will see if their personal appeals and policy plans catch fire with the first predominantly black electorate to vote in the race.

Mr. Biden, who lost badly in Iowa and New Hampshire but improved in last weekend’s Nevada caucuses, is widely expected to win at least a plurality of black Democrats, with voters citing his familiarity with their concerns and his potential to appeal to moderate Republicans in a general election. But the margins may reveal fault lines around gender, age, regions and viewpoints.

Other Democratic hopefuls from across the ideological spectrum — liberals like Mr. Sanders and Senator Elizabeth Warren, as well as the billionaire Tom Steyer and moderates like Mr. Buttigieg — are aiming to demonstrate that African-Americans are not a monolithic voting bloc.

Many black Democrats made that point over the last year, as some favored white candidates like Mr. Biden over black contenders like Senators Kamala Harris and Cory Booker, and others embraced a wide variety of political and ideological positions.

Mr. Biden has led in South Carolina polls all year, but Mr. Sanders and Mr. Steyer appear to have gained ground recently, and Ms. Warren and Mr. Buttigieg are seeking to show that they have black support in the primary.

“I don’t know that anybody’s going to walk away with it. And I think there might be some surprises,” said the Rev. Joseph Darby, a pastor who leads Nichols Chapel A.M.E. Church in Charleston. “But I don’t pay attention to the polls because they never call me.”

At a ministers’ breakfast in North Charleston on Wednesday hosted by National Action Network, the civil rights organization led by the Rev. Al Sharpton, several voters echoed his point — stating that the question of “what Democratic candidate is most electable” in the primary could not be settled until black voters throughout the South weighed in on the nominee.

Chris Richardson, 39, said he was not surprised that many black voters in South Carolina were unfazed by Mr. Biden’s poor results in Iowa and New Hampshire. He flipped the question around: Why would anyone assume they’d care?

“Black voters know white voters better than white voters know themselves,” Mr. Richardson said. “So yeah, we’ll back Biden, because we know who white America will vote for in the general election in a way they may not tell a pollster or the media.”

Among the most important results in South Carolina is the margin of victory in different parts of the state, which will help determine the awarding of delegates; Mr. Sanders currently leads in delegates, followed by Mr. Buttigieg, Mr. Biden and Ms. Warren.

The outcome for Mr. Biden will also determine if he can argue that he has a “firewall” of black support in the highly competitive race; a victory would also help him make his case in other racially diverse primaries, including the big ones in North Carolina and Virginia on Tuesday.

One major factor in the race that won’t be settled in South Carolina is the electoral might of Mr. Bloomberg, who is not competing in the state but will be on the primary ballots on Super Tuesday. Mr. Bloomberg has spent hundreds of millions of dollars courting voters, with particular attention to black and Latino voters in delegate-rich states such as Texas and California, which vote Tuesday.

Aides to Mr. Biden have begun openly complaining that Mr. Bloomberg might siphon some black voters from the former vice president and effectively deliver the nomination to Mr. Sanders.

Akunna Cook, a former executive director of the Black Economic Alliance, said Mr. Bloomberg “could become a spoiler” for Mr. Biden even with a win in South Carolina, because some moderate voters might still decide to back Mr. Bloomberg on Super Tuesday.

“My nephew is 21 and is voting in the presidential for the first time. And he’s deciding between Bloomberg and Warren,” Ms. Cook said. “He sees those Bloomberg ads everywhere. And if you only know him through those ads, he seems like a good candidate. He’s taking on Trump, and he’s talking like the base.”

In South Carolina, the campaign of another self-funding billionaire — Mr. Steyer — gave Mr. Biden’s team a miniature preview of what it is up against. Mr. Steyer dominated the state’s airwaves and invested millions in organizing to chip away at Mr. Biden’s black support with some success.

“I’ve had three Steyer people knock on my door this week,” said Lacy Washington, a 33-year-old from North Charleston. “This whole thing is a hot mess, and I can’t wait for it to be over.”

But this past week, Mr. Biden got a clear lift: The state’s most powerful Democrat, Representative James F. Clyburn, endorsed him in an impassioned speech Wednesday that cited Mr. Biden’s intimate understanding of the state.

No matter who wins South Carolina, the yearlong primary campaign in the state has shown the power — and diversity — among black voters within the Democratic Party.

The large field of two dozen candidates provided opportunities for black activist groups to pressure hopefuls on issues that seemed secondary to many past Democratic candidates, including robust criminal justice proposals, economic agendas that target the racial wealth gap, and the possibility of reparations for the descendants of slaves.

The campaign has also exposed cracks along age, college education level, geography and gender, leading black voters to split more across candidates than they have in previous cycles.

There are churchgoing supporters of Mr. Biden and others drawn to the business acumen of Mr. Bloomberg and Mr. Steyer. Younger black voters — drawn to the promise of a “political revolution” — seem likely to boost Mr. Sanders, and policy-focused voters looking for a candidate pitching unity can back Mr. Buttigieg or Ms. Warren. 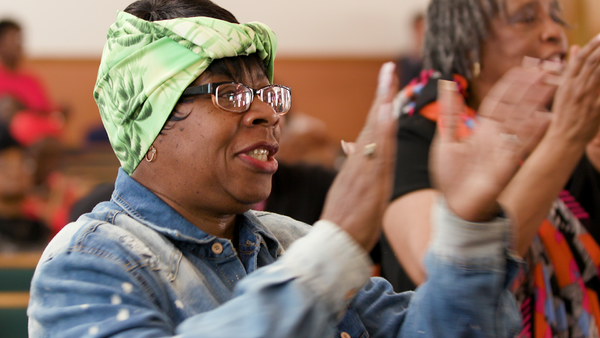 Is the Church Still the Center of the Black Vote in South Carolina?

Democrats are fighting for the crucial black vote in the South Carolina primary tomorrow. Churches have long played the primary role in mobilizing black support, but some activists are pushing for change.

“I see the momentum of Bernie, I see the number of black people for Biden, but I’ll be with Elizabeth Warren till she drops out,” said Herbert Bodison, a 65-year-old resident of North Charleston.

Shareef Boddie, a 23-year-old from Goose Creek, said he was torn among three candidates: Mr. Sanders, Mr. Biden and Mr. Buttigieg. He planned to make his decision on the way to the polls.

“I may go for Bernie Sanders, because he plans on relieving college debt from students. And that’s a big thing,” Mr. Boddie said.

The range of opinion is the electoral manifestation of the oft-repeated mantra “black voters are not monolithic.” But it could also curb the determinative power of black voters in the Democratic nomination process, considering that they have historically rallied around a single candidate, helping that contender grab all-important delegates in key congressional districts and providing an inside track to the nomination.

Rashad Robinson, president of the racial justice organization Color of Change, said black Democrats in this primary had done more than choose the winner: They forced the field of candidates to reshape how they discuss the black community.

“We’ve had a campaign season where people are calling out structural racism and saying ‘white supremacy’ on the debate stage,” Mr. Robinson said. “The fact that black people are being talked about in more nuanced ways — like black youth vote versus black baby boomers vote — it speaks to how much the movement building has been translated to electoral power.”

Mr. Darby, the Charleston minister, said he believed the whiteness of the Iowa and New Hampshire electorates affects how they view the primary’s central question of electability.

He contended that many white voters in those states could “afford” to base voting decisions solely on policy outlines and ideological promises, while many black voters were conditioned by history to assume the worst about politicians. He said he was not surprised that Mr. Biden was beaten by popular candidates in those states but was favored in South Carolina.

He compared Mr. Trump’s presidency to a house fire, and said black voters were better at recognizing the urgency.

“If your house is on fire, you don’t bring the decorators in to redecorate while the flames are still raging,” Mr. Darby said. “You put out the fire first — and then you redecorate.”