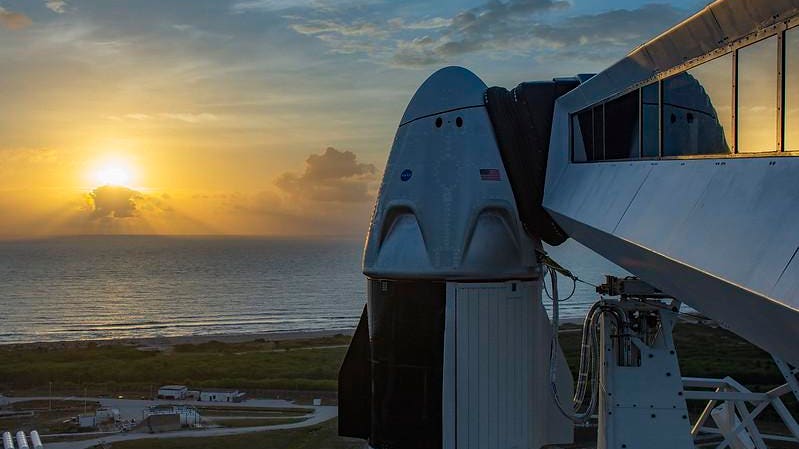 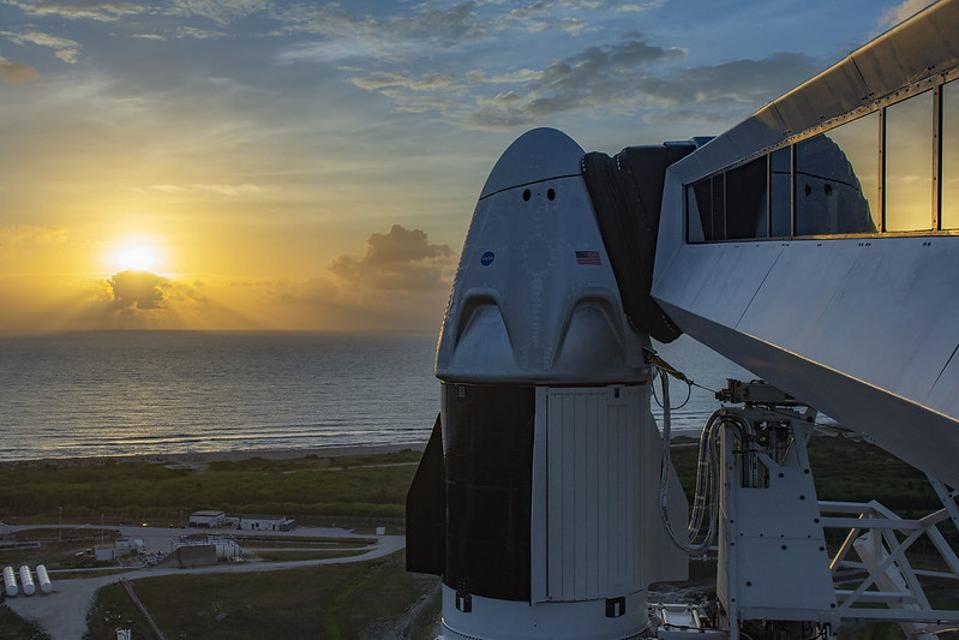 UPDATE: This article on the SpaceX launch time has been updated to include information on how to watch live online with a commentary by Neil deGrasse Tyson, and also how to see Crew Dragon in the night sky over Europe a few minutes after the launch.

Are you ready for “Launch America?” Later today—Wednesday, May 27 at 4:33 p.m. EDT—two US astronauts will launch to the International Space Station (ISS) from US soil, and on a US rocket.

That’s not happened of almost a decade, and it’s going to be a massive, unmissable event. The pandemic means it’s also going to be an event that’s almost entirely staged online.

Get ready for some iconic imagery as NASA relieves Apollo-era imagery and SpaceX puts the astronauts in a Tesla Model X before a Falcon 9 rocket blasts-off to space to make history.

What is ‘Launch America?’

It’s the culmination of almost a decade’s work to get US astronauts launched to the ISS on a US rocket from US soil. Since the Space Shuttle stopped flying in 2011, NASA has had to pay Russia’s Roscosmos for seats in its Soyuz capsule. However, “Launch America”—officially known as the SpaceX Crew Dragon Demo-2 mission—isn’t just NASA ceasing its reliance on Russia. SpaceX’s provision of all the space hardware—a Falcon 9 rocket and its Crew Dragon capsule—make this also the first-ever crewed commercial rocket launch.

MORE FROM FORBESSpaceX Crew Flight To ISS A Boon To U.S. But A Costly Blow To Russian Space ProgramBy Eric Tegler

There’s a lot riding on this; specifically, NASA astronauts Doug Hurley and Bob Behnken, who are on their way up to the ISS. 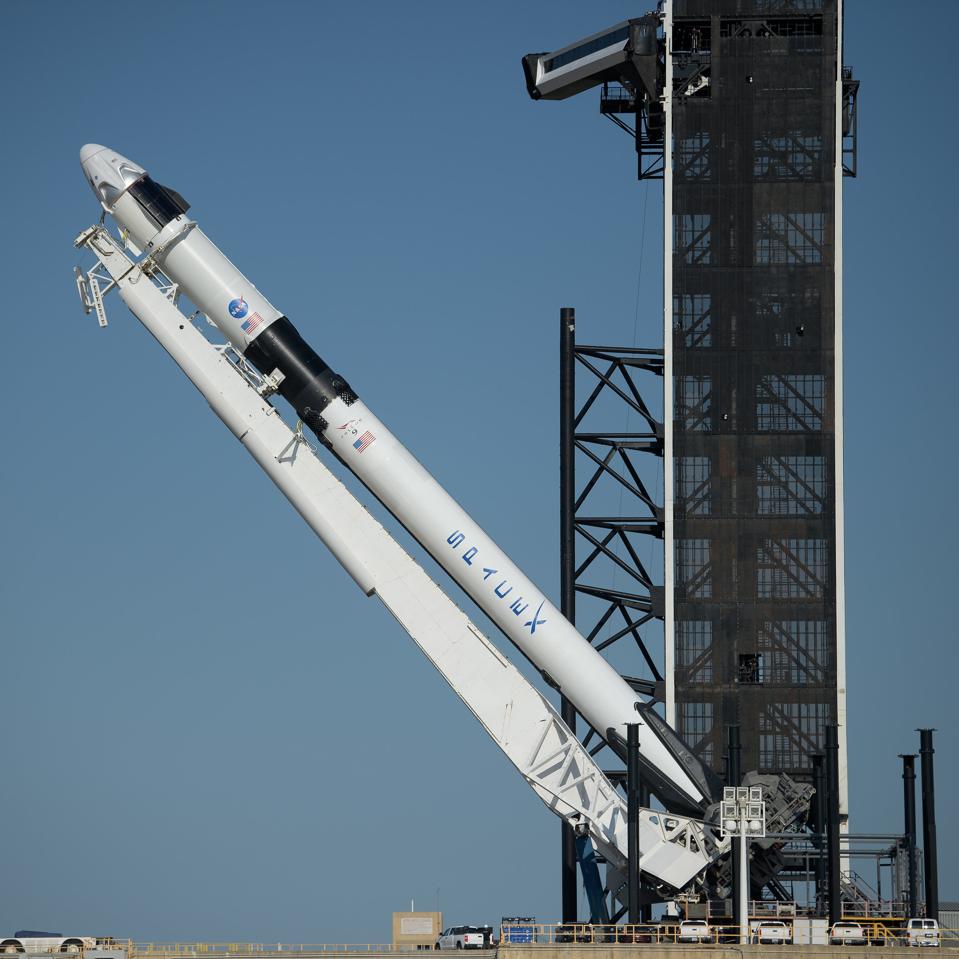 A SpaceX Falcon 9 rocket with the company’s Crew Dragon spacecraft onboard is seen as it is raised … [+] into a vertical position on the launch pad at Launch Complex 39A as preparations continue for the Demo-2 mission, Thursday, May 21, 2020, at NASA’s Kennedy Space Center in Florida. NASA’s SpaceX Demo-2 mission is the first launch with astronauts of the SpaceX Crew Dragon spacecraft and Falcon 9 rocket to the International Space Station as part of the agency’s Commercial Crew Program. The flight test will serve as an end-to-end demonstration of SpaceX’s crew transportation system. Behnken and Hurley are scheduled to launch at 4:33 p.m. EDT on Wednesday, May 27, from Launch Complex 39A at the Kennedy Space Center. A new era of human spaceflight is set to begin as American astronauts once again launch on an American rocket from American soil to low-Earth orbit for the first time since the conclusion of the Space Shuttle Program in 2011. Photo Credit: (NASA/Bill Ingalls)

Will anyone be in Florida to see it live?

Hardly anybody will witness this historic launch. “NASA and SpaceX are discouraging the general public because it is very dangerous to be gathering it in large groups like that,” says Garrett Reisman, SpaceX Senior Advisor and former NASA Astronaut, who thinks that in normal times this event would draw enormous crowds in Florida. “Yes, it’s going to be different, but given all the things that were sacrificing to keep people safe during this pandemic, I think that’s OK.”

Luckily, there’s going to be extensive coverage streamed online as webcasts from SpaceX and NASA, and possibly as live broadcasts on US TV networks.

As well as the coverage from NASA, SpaceX has plans to stream the events live on the SpaceX YouTube channel and on the SpaceX website via its HQ in Hawthorne, California.

Its coverage will begin 45 minutes before launch when the launch director verifies “go” for propellant load at Kennedy Space Center.

If you want a lot more than just the immediate pre-launch build-up, then head to:

NASA’s “Worm” logo is making a comeback for this mission—here it is on the SpaceX Falcon 9 rocket.

Thanks to a newly-announced live webcast from New York City’s American Museum of Natural History, you can also join in with a special “Spaceflight Live Watch Party” that features commentary of “Launch America” from Neil deGrasse Tyson. The Hayden Planetarium Director will join Museum astrophysicist Jackie Faherty to discuss the future for human missions to space. At 4:05 p.m. EDT you can watch live on this Facebook page or via this website.

That event will be preceded by a 1:00 p.m. Field Trip: Spaceflight Launch Party in which the Museum’s Director of Astrovisualization Carter Emmart and Faherty explore and experience the thrill of space flight, see the sites, and discover what goes into planning a successful mission to space.

‘Launch America’: what’s going to happen on the day

Here’s what NASA says is going to happen on May 27, as broadcast on NASA TV. All times are in EDT:

When will the astronauts reach the ISS?

That’s due to take place 19 hours later on Thursday, May 28, along with the hatch opening and welcoming ceremony on the ISS. It will all be broadcast live on NASA TV:

How to see Crew Dragon in the night skies above Europe

After a successful launch of the Falcon 9 rocket from Cape Canaveral it may be possible to see it in twilight skies over Europe. MeteorWatch reports that Europeans should be outside about 15 minutes after the launch. Get updates from the website’s Twitter feed, @VirtualAstro.