On May 30, 1921, the Greenwood district of Tulsa, Okla., was a thriving black community: a rarity in an era of lynchings, segregation and a rapidly growing Ku Klux Klan.

By sunrise on June 2, Greenwood lay in ruins: burned to the ground by a mob of white people, aided and abetted by the National Guard, in one of the worst acts of racial violence in American history. The death toll may have been as high as 300, with hundreds more injured and an estimated 8,000 or more left homeless.

Local officials, seeing a public-relations nightmare, expressed contrition and said they would rebuild the community. Instead, they destroyed documentation and spent the next 50 years pretending nothing had happened. Those who were there went silent, generations of children grew up oblivious, and anyone who dared raise the subject was told in no uncertain terms: We don’t speak of that here.

And on Saturday, the day after the Juneteenth holiday that celebrates the abolition of slavery in the United States, Tulsa will play host to a rally for a president who uses racist language and has defended white nationalists.

Here is a brief history of Greenwood, the racist killings, and what happened afterward, drawn from interviews with researchers and local officials, public records, and a commission’s 2001 report on the massacre. 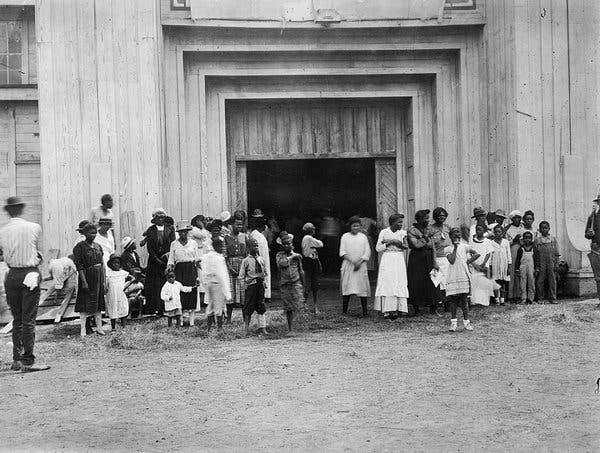 Entrance to refugee camp on the fair grounds in Tulsa after the race riot of June 1st, 1921.Credit…Library of Congress

At the time of the massacre, the Greenwood neighborhood had a population of nearly 10,000, including descendants of slaves as well as people who, according to the 2001 report of a commission that investigated the massacre, had come because Oklahoma seemed to offer “a chance to escape the harsher racial realities of life” in the Deep South.

Black Tulsans, segregated into Greenwood, had built a thriving business district known as Black Wall Street after O. W. Gurley, a wealthy black landowner from Arkansas, moved there and started opening businesses for black residents. He named the main street after Greenwood, Miss., and the name was later extended to the whole neighborhood.

“That’s what people don’t know,” Mr. Matthews said. “We had that kind of prosperity in 1921. This was Black Wall Street for a reason, and it was burned down and destroyed for a reason.”

Debris, furniture and homes razed to the foundations after the mob passed through.Credit…Library Of Congress/Via Reuters

It began, like so much racial violence, with a false allegation that a black man had raped a white woman.

The man was Dick Rowland, and he was accused of assaulting Sarah Page, an elevator operator, on May 30, 1921. Nobody knows for sure what happened, but a common suggestion is that Rowland may have tripped and, to catch his fall, grabbed Page’s arm. She screamed and he, knowing the danger he was in, ran from the building.

Rowland was arrested the next morning and jailed in the Tulsa County Courthouse, where the sheriff had allowed a lynch mob to kidnap another black man the year before. So when The Tulsa Tribune ran an inflammatory article and editorial on May 31, black Tulsans had every reason to fear that Rowland would be lynched, and no reason to believe the authorities would protect him.

That evening, as hundreds of white Tulsans shouted for the sheriff to turn Rowland over, groups of armed black men showed up at the courthouse and told officials they were there to help defend it. Many white people went off to get their own weapons, and the crowd grew to more than 2,000.

Finally, according to the 2001 commission report, a white man tried to grab a black man’s gun, the gun went off, and the white mob spread out through the streets of downtown Tulsa, shooting black people on sight.

The morning of June 1, the mob rushed into Greenwood and opened fire, including with machine guns; led black people out of their homes and businesses at gunpoint; looted valuables and set the buildings on fire. Black residents tried to defend themselves but were overpowered.

The mob stopped firefighters from reaching much of the burning neighborhood, while the police and National Guard arrested black people instead of the white rioters. In some cases, members of the Guard joined the rioters.

In November 1921, patients were still recovering from the violence in Tulsa.Credit…Library of Congress

After the massacre, officials set about erasing it from the city’s historical record. Victims were buried in unmarked graves. Police records vanished. The inflammatory Tulsa Tribune articles were cut out before the newspapers were transferred to microfilm.

“What happens fairly rapidly is this culture of silence descends, and the story of the riot becomes actively suppressed,” said Scott Ellsworth, a lecturer at the University of Michigan who is from Tulsa and contributed to the 2001 report, and whose 1982 book “Death in a Promised Land” was the first full history of the massacre.

City officials cleansed the history books so thoroughly that when Nancy Feldman, a lawyer from Illinois, started teaching her students at the University of Tulsa about the massacre in the late 1940s, they didn’t believe her.

Mr. Matthews, the state senator, said that even as a black person raised in Tulsa, and even as the grandson of a woman who survived the massacre, he did not learn about it until he was in his 20s.

In the late 1960s, Don Ross, a reporter who later became a Democratic state legislator, began investigating the history of the massacre. As the dam began to crack, a researcher, Ed Wheeler, interviewed survivors in 1971 and found a message on his windshield: “Best look under your hood from now on.”

Another quarter-century passed before the breaking point: In 1995, when journalists flooded in to cover the terrorist truck bombing of the Alfred P. Murrah Federal Building in Oklahoma City, Mr. Ross managed to get the attention of national outlets, Dr. Ellsworth said. That led to television coverage in 1996, a burst of publicity and, ultimately, the creation of the investigating commission.

A truck carries soldiers and African-Americans near the Litan Hotel during the massacre.Credit…Library Of Congress/Via Reuters

In the immediate aftermath of the massacre, the Ku Klux Klan used it as a recruiting tool, and within months, its Tulsa chapter became one of the nation’s largest, according to the 2001 report. At the same time, numerous black communities marshaled their money and resources to help Greenwood rebuild, said Phil Armstrong, the director of the centennial commission.

Since the 2001 report came out, Tulsa has grappled publicly with its history and called for “racial reconciliation.”

But the city remains deeply segregated, and longstanding problems have come to the surface amid the national protests for racial justice and police accountability.

Just this month, Tulsans pressured their mayor, G. T. Bynum, to end the city’s contract with the now-defunct television show “Live PD”; the Tulsa police announced an inquiry into the arrest of a black teenager who was accused of jaywalking and forced to the ground; and a police officer said in a radio interview that officers were “shooting African-Americans about 24 percent less than we probably ought to be, based on the crimes being committed.”

Amid it all, Mr. Bynum, a Republican, apologized for playing down the role of race in the 2016 police killing of an unarmed black man, Terence Crutcher.

With President Trump on his way, some Tulsans worry that his rally will set off more unrest. At least 240 members of the National Guard have been deployed for the weekend, officials said.

“There’s a lot of fear on both sides about what’s going to happen,” said Charity Marcus, a Tulsa entrepreneur and political strategist who co-founded Black Women Business Owners of America. “And then the people in the middle who are like, ‘I just don’t want our city to be burned down.’”