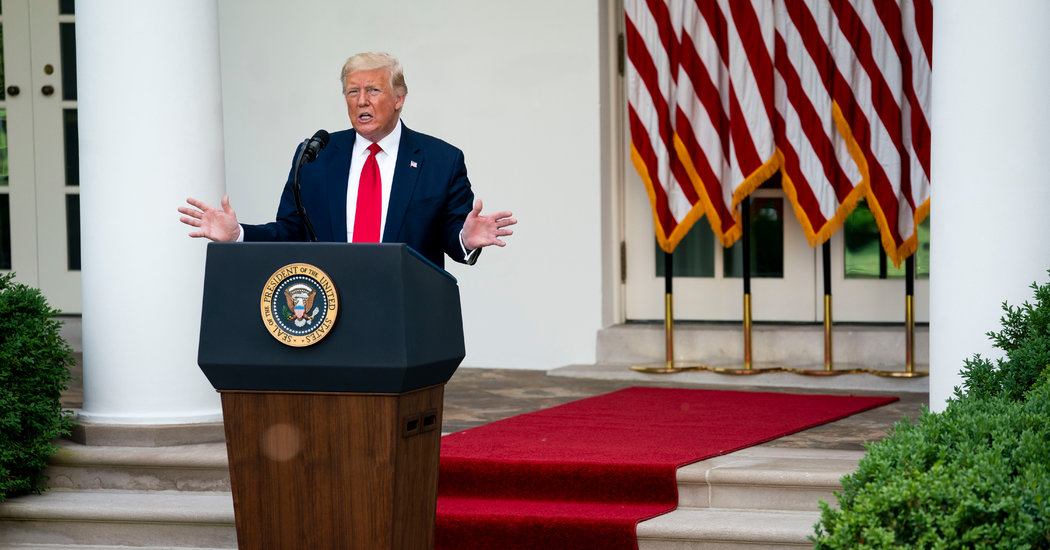 The coronavirus has completely overtaken American life and politics, but in polls, most people don’t name it as their top voting issue.

Political observers agree that what happens with the virus over the next few months is likely to determine the outcome of the November presidential election, but what they really mean is this: President Trump’s response to the virus — and how it’s perceived — will probably swing the election. Tied closely to that is how much the economy bounces back.

“The two top interrelated issues right now are the state of the pandemic and the state of the economy, and it’s hard to separate the two,” Whit Ayres, a Republican pollster, said in an interview. “The real question is what it looks like come October.”

In a Kaiser Family Foundation poll released this week, voters were markedly more likely to name traditional issues like health care, the economy and foreign policy as the ones they’ll be voting on.

Still, 50 percent said the virus would be very important to their vote for president, and 72 percent said the pandemic would factor into their vote at least somewhat. When asked in an open-ended question what exactly they meant by that, the most common response was some variation of this: How Mr. Trump responds.

Doubts over Trump’s handling of the virus

From early April to late May, the virus’s death toll skyrocketed. Just over 50,000 people had been killed by the pandemic worldwide at the start of last month, but today the death toll in the United States alone is more than 100,000. In that time, governors have called on Mr. Trump to address testing deficiencies — usually to no avail — and he has often struck a defiant tone when asked why he isn’t doing more.

Even among Republicans, approval of Mr. Trump’s handling of the virus now runs a few percentage points behind their rating of his overall performance as president.

Voters in the political middle, including a small share of Democrats who initially gave Mr. Trump the benefit of the doubt, have particularly lost faith in his handling of the crisis. In a Fox News poll published last week, just 29 percent of independent voters gave him positive marks on dealing with the pandemic.

His numbers have also flagged in polling matchups with Joseph R. Biden Jr., the presumptive Democratic presidential nominee; rare is the poll these days that finds Mr. Trump escaping the low 40s in a head-to-head scenario.

In back-to-back Fox polls, Mr. Trump’s approval among registered voters on handling the pandemic fell by eight points from April to May; it now sits at 43 percent, roughly even with his 44 percent approval rating over all, according to Fox.

Basically, if you were for Mr. Trump before, you are probably still with him now. If you started out this year generally against him but willing to see how he led during the crisis, you have probably given up on that by now.

Still, it matters that Mr. Trump has proved to have a remarkably high floor. With the Republican establishment and the conservative news media firmly behind him, the president is unlikely to fall far below 40 percent approval. To finish strongly in November, he would need to win back between five and 10 points nationally, relying heavily on persuadable voters.

“A lot of it has to do with where people will be economically going into the election, and who they will credit or blame for that,” Thomas Sutton, a professor of political science at Baldwin Wallace University in Ohio who runs the university’s statewide poll, said in an interview. “At this point in October, the unemployment rate will be less, Trump will claim credit for that, and Biden’s got to run a really strong campaign with a countermessage to stop him from getting that credit and taking it to victory in Ohio.”

The economy could make or break Trump’s chances

Mr. Trump has historically enjoyed positive ratings on his handling of the economy. Of the five issues that Fox asked about in its latest poll, the economy was the only one on which voters did not generally say they would prefer to have Mr. Biden overseeing it.

The president has made it clear that he prioritizes restarting the economy soon, even if that means disregarding the warnings of his own health experts. With most states now moving forward with a partial reopening of public accommodations and businesses, Mr. Trump is eager to point to signs of economic life.

Unemployment has climbed to 14.7 percent — and it is probably much higher than that, in reality — the stock market has largely bounced back, and public confidence in a recovery is rising. Only 50 percent of Americans now say the worst days of the pandemic are ahead, down from three-fourths in early April.

And the Consumer Confidence Index, a polling measure of the national economic mood, finally stabilized this week after taking a historically steep plunge in the weeks before.

“You’re not going to get a massive amount of economic growth in this time, but a psychological effect is the biggest thing,” said Chuck Coughlin, a Republican-aligned consultant in Arizona whose firm recently published a poll in that swing state. “People just beginning to feel positive about going out, beginning to socialize, seeing some restaurants open again: I think that’s incredibly important for the general electoral prospects of Republicans.”

While Mr. Trump has received increasingly middling reviews for his handling of the virus, many governors’ approval ratings have leapt. In poll after poll, Americans have been far more likely to give their state governments high marks on confronting the virus, even as they don’t rate the federal government’s work so well.

Many states heavily affected by the virus also happen to be swing states run by Democratic governors whose ratings have surged: Wisconsin, Michigan, Pennsylvania and North Carolina all fit that description. In two key states, Georgia and Florida, the inverse has occurred: The approval ratings of the Republican governors, both reluctant to enforce social-distancing measures, fell.

Very few of these governors in pivotal states are up for re-election in 2020, but their popularity — or unpopularity — could play a role in helping to drive enthusiasm and turnout within their parties.

“There are a number of governors who, if they could run for re-election in November, would be untouchable,” Mr. Ayres said. “They have job approvals in the 70s and 80s.”